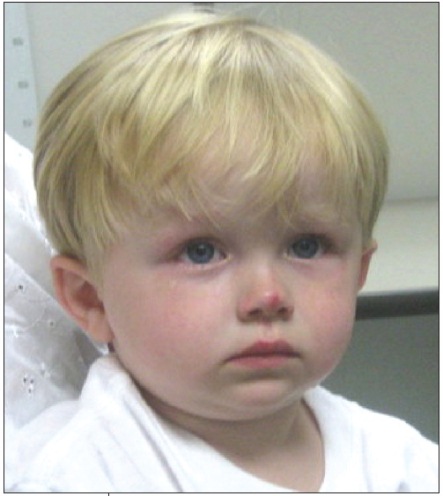 This 21-month-old toddler was brought for a well child visit. His head had been large since birth; at this visit, head circumference was 51 cm (significantly above the 95th percentile). Neurological findings were normal; except for some early developmental gross motor delays, he was on a par with his peers. All other physical findings were normal. His mother's head circumference is 59 cm and his father's is 64 cm.

The child underwent MRI scanning at 7 months of age because of the macrocephaly. Scans showed symmetrical bifrontal subarachnoid cerebral spinal fluid, typical of benign external hydrocephalus. It is important to determine whether the location of fluid is subarachnoid or subdural, because the latter could be related to child abuse or prior meningitis. In 35% of children with benign macrocephaly, macrencephaly (or excess brain tissue) is also present.1

Benign macrocephaly--also known as macrocrania or megacephaly--is hereditary and most likely autosomal dominant.2 The condition of external hydrocephalus and macrocephaly usually stabilizes in the second to third year of life; the head circumference is generally around the 98th percentile by age 3 years.2 Children should be monitored closely by their pediatrician and, in some cases, by a neurologist for developmental progression. Infantile macrocephaly is associated with an increased risk of autism spectrum disorders.3

Other syndromes associated with macrocephaly (enlarged ventricles, excess brain tissue, or hydrocephalus) and a normal IQ and neurological findings are1: