A 10-year-old girl presented with her mother for evaluation of a large brown spot that had been present on her right arm since birth.

Initially, the birthmark had been asymptomatic, but over the past few months it had become “thicker and itchy.”

Physical examination showed a large, well defined, dark brown patch with hypertrichosis, extending over the lateral aspect of the right forearm, right arm, and right shoulder area (A and B). 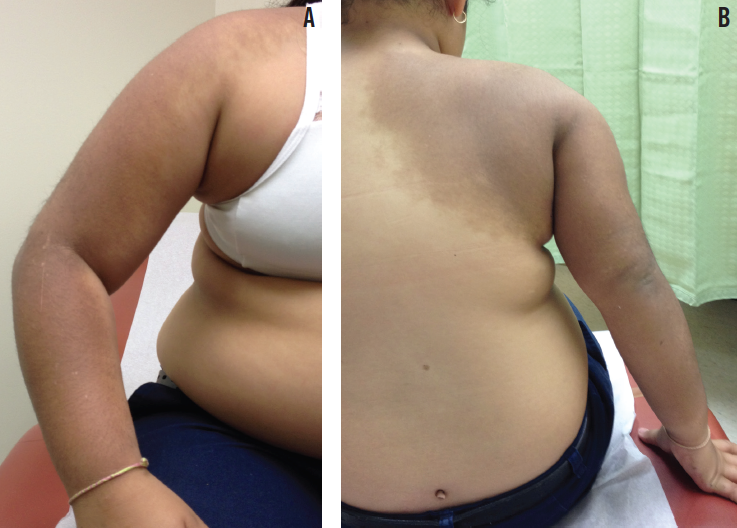 The girl’s right arm also appeared slightly larger than the left one (C).

Examination of the girl’s back revealed a small skin appendage over the sacral area (D); the mother stated that this lesion also had been present since birth. The mass was asymptomatic, and no discharge had ever been noted from it. No significant changes in the size of the mass had been noted over the past few years. 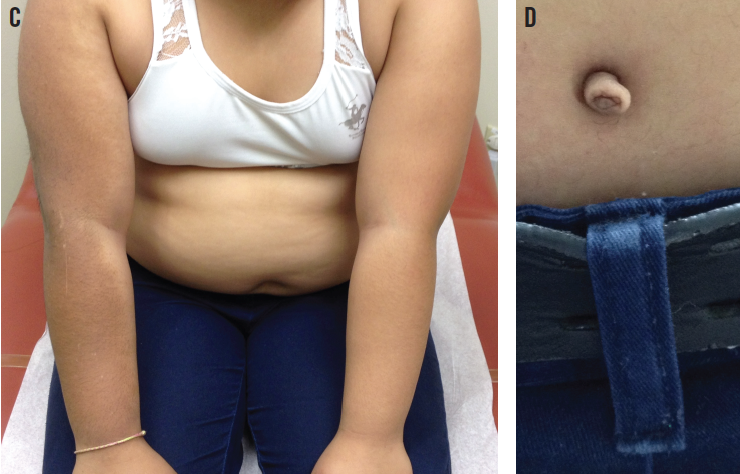 The patient had normal strength, sensation, and range of motion in all extremities. She denied weakness in her lower extremities, and she denied any difficulties with bowel or bladder control. Physical examination findings were otherwise normal.

Due to the location of the lower back mass and concerns for spinal dysraphism, magnetic resonance imaging (MRI) of the spine was performed, the results of which showed the conus medullaris terminating at the plane of the superior endplate of vertebra L2, along with a lipoma of the filum terminale.

After examining the patient and reviewing her MRI results, a pediatric neurosurgeon determined that the findings were consistent with a small dermoid tumor connected through a sinus tract to the distal aspect of the spinal cord. A pediatric dermatologist also assessed the girl and identified her arm lesion as a Becker nevus.

The nevus, which is considered a hamartoma of ectomesodermal tissues,3 is described as a hyperchromic, brown, hairy patch. It is more common in the male population and is androgen dependent, undergoing significant development during the pubertal years.3 The nevus does not include nevomelanocytic structures.1

The most common associations with a Becker nevus are breast hypoplasia, spina bifida, thoracic scoliosis, and pectus carinatum. The syndrome is more common in women, with a female to male ratio of 1.5 to 1, probably because breast hypoplasia is easier to diagnose and is a significant concern in women.3

This syndrome has no clear genetic basis. The vast majority of cases happen sporadically.2

Management of Becker nevus syndrome consists of treating the various physical findings. Surgical excision of the nevus rarely is entertained, because the lesions generally are large. Laser treatment (Q-switched ruby, Erbium:YAG) has been used with mixed long-term results.3 Spironolactone has been used for the management of breast hypoplasia.2,3

Examination of our patient revealed no breast discrepancies and no scoliosis or other musculoskeletal abnormalities. We will continue to monitor her condition yearly.