Babesiosis: An Unusual Cause of Weakness in an Octogenarian

Babesia microti, the parasite that causes babesiosis, and Borrelia burgdorferi, the spirochete that causes Lyme disease, are zoonotic infections spread by the Ixodes scapularis tick. Transmission occurs primarily in the Northeastern and upper mid-Western United States during the summer months. Babesiosis may run an asymptomatic and limited course in younger individuals; however, in older patients, especially those with Lyme disease coinfection, a fulminant clinical course with numerous complications or death may occur.

The following case report illustrates the complexities of diagnosing babesiosis in an elderly woman with these coinfections. The initial presentation and the patient’s first two hospital days were benign and uneventful; however, she developed a rapidly deteriorating clinical course complicated by profound hemolytic anemia, elevated liver function tests, and adult respiratory distress syndrome (ARDS) requiring ventilator support. An infectious diseases (ID) specialist helped to ascertain the etiologies of the patient’s presenting symptoms and subsequent complications.

In early summer, an 80-year-old white woman visited a Pennsylvania emergency department with several nonspecific symptoms that had started approximately 1 week earlier. Her chief symptoms were generalized weakness, malaise, and an unsteady gait. She also stated she had an occasional dry cough and headaches. Her usual state of health was that of an independently functioning woman who tended her own garden. She had not required any recent acute medical care and had no history of blood transfusions. Her medical history included degenerative lumbar disc disease, hypertension, dyslipidemia, paroxysmal atrial fibrillation, and a remote stroke with no residual deficits.

She was afebrile and her vital signs were within normal ranges. Her neck was supple, without adenopathy. The heart, lung, and abdominal examinations were normal. She had no rash. Cranial nerves, sensation, and reflexes were all intact on neurological examination. The musculoskeletal examination was significant for minimally diminished but symmetrical strength throughout all four extremities. Her gait was slightly ataxic. The initial laboratory results showed mild azotemia, hyponatremia, anemia, and thrombocytopenia (Table). Neurological imaging with computed tomography and magnetic resonance imaging was unrevealing, and her chest radiograph showed no abnormalities. The urinalysis results were negative. 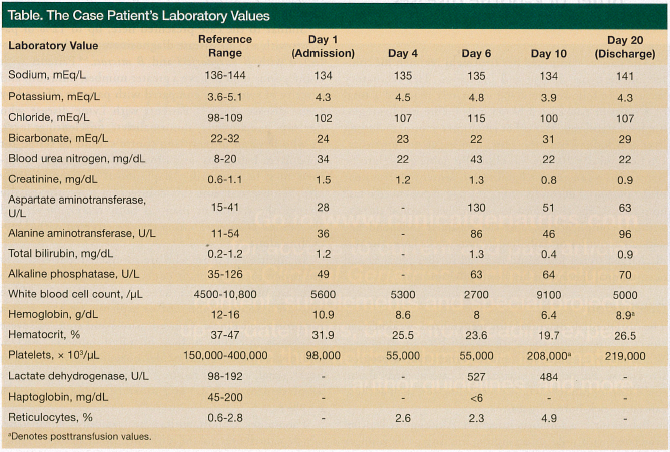 The patient was admitted for evaluation and for treatment of the mild azotemia with intravenous fluids. Influenza testing was not performed because of the time of year. By the second hospital day, the patient developed a low-grade fever of 100.6°F, which increased to 102°F on the third day. At this point, cultures were obtained, an ID specialist was consulted, and levofloxacin 500 mg daily and vancomycin 1 g daily were initiated for broad-spectrum antibacterial coverage.

On hospital day 4, the patient developed ARDS and required transfer to the intensive care unit (ICU) for intubation and ventilator support. A repeated chest radiograph now showed advanced pulmonary edema. In addition, her laboratory results revealed worsening anemia, with the hemoglobin level decreasing by more than 2 g since her admission (Table).

By hospital day 6, her liver function tests were elevated and she had worsening pancytopenia. An elevated lactate dehydrogenase and low haptoglobin levels indicated hemolytic anemia, requiring transfusions of packed red blood cells and platelets. During this time, her urine, sputum, and blood cultures continued to remain negative for the growth of any bacteria or fungi.

Given the clinical pattern and the patient’s history of being an avid gardener, the ID consultant recommended testing for Lyme disease and Babesia. Enzyme-linked immunosorbent assay and a confirmatory Western blot test were positive for Lyme disease. In light of these findings, the patient was placed on standard treatment with doxycycline 100 mg twice daily. Peripheral blood smears were examined, and intraerythrocytic parasites consistent with the presence of B microti were identified. Treatment with clindamycin 600 mg every 8 hours and quinine 648 mg every 8 hours was initiated.

In the meantime, the patient’s ventilator-dependent respiratory failure, which was attributed to ARDS and congestive heart failure, was improving. Although she required bilateral thoracentesis procedures to assist in the weaning process, she was finally extubated on hospital day 13.

The patient continued her treatment regimen for coinfection of Lyme disease and babesiosis. Her laboratory values were followed, and she ultimately required a total of 5 units of packed red blood cells before her hemoglobin level stabilized. Her other laboratory values, including liver and kidney function tests, also began to normalize. On hospital day 20, she was clinically stable enough to be transferred to an acute rehabilitation center for treatment of the profound deconditioning she had experienced while hospitalized. She continued to tolerate her medical therapy without complications, and she regained independence with all activities of daily living. Two weeks later, she was discharged to her home and received further physical and occupational therapy in her home environment.

The differential diagnosis for generalized weakness in elders is broad, and the work-up can become extensive. While many cases are self-limited, others take a progressive course. Subtle clues elicited by a careful medical and social history can reveal unexpected illnesses, such as those caused by tick-borne organisms.

Babesiosis is a zoonotic infection. Although it is often associated with mild or asymptomatic disease in younger patients, babesiosis may be severely debilitating or even deadly in older individuals. The symptoms resemble a nonspecific flu-like syndrome consisting of fatigue, generalized weakness, fever, rigors, anorexia, nonproductive cough, arthralgia, and headache. Because of the vague symptomology, the time to diagnosis is often delayed by an average of 15 days after the onset of symptoms.1

Another barrier to timely diagnosis is that babesiosis requires a high degree of clinical suspicion and specific testing. Most cases of B microti infection are transmitted in endemic regions via the Ixodes scapularis tick between late spring and early autumn. Onset of this vector-borne illness occurs 1 to 4 weeks after transmission.2 Although rare, babesiosis can also be acquired via a blood-product transfusion. These cases tend to be more severe, and the onset of symptoms may occur after a latent period of as long as 1 to 9 weeks after transmission.2 Because of the specific geographic and temporal parameters, careful medical, social, and travel histories are important.

An added obstacle to diagnosis is that babesiosis may initially be mistaken for or overlooked because of concomitant infection with other tick-borne diseases. The Ixodes tick is the common vector for three zoonotic infections: B burgdorferi, the spirochete causing Lyme disease; B microti, the intraerythrocytic parasite causing babesiosis; and Anaplasma phagocytophilum, the gram-negative bacterium causing human granulocytic anaplasmosis.

Similar to the case presented here, up to 12% of patients with a Lyme disease diagnosis are found to be coinfected with B burgdorferi and B microti.3,4 Patients with coinfections tend to have a greater number, duration, and severity of symptoms compared with patients affected by Lyme disease alone.3,4 Patients with Lyme disease who develop hematologic abnormalities, unrelenting fever, or who have an unremitting course should be tested for concurrent babesiosis, as a broadened antimicrobial regimen may be required. Anaplasmosis codiagnosis may also be observed, but this coinfection does not usually change the treatment plan, as both B burgdorferi and Anaplasma phagocytophilium may be targeted with doxycycline alone.

In addition to those who are coinfected, patients who are prone to a fulminant course of babesiosis are those who are older, male, or have chronic diseases. Those who are immunosuppressed or asplenic are also at risk for protracted illness. Complications and signs of severe babesiosis infection include hemolytic anemia, ARDS, and disseminated intravascular coagulopathy, as well as heart, renal, and liver failure.1,2,5 Severe cases may require admission to an ICU, and mortality ranges from 6% to 9%.2

Laboratory abnormalities are typically nonspecific, which contributes to the difficulty of diagnosis. Hematologic findings are often consistent with hemolytic anemia—decreased hemoglobin and haptoglobin levels and elevated reticulocyte counts and lactate dehydrogenase levels. Thrombocytopenia may be seen as well and was present in this case. Blood chemistry results may include azotemia and elevated liver function tests. The diagnosis of babesiosis is confirmed by visualization of intraerythrocytic Babesia on a blood smear.2 A highly sensitive and specific test used to identify Babesia DNA in the blood is polymerase-chain-reaction assay, which also may be used to confirm the diagnosis.2

Treatment of babesiosis requires combination therapy for 7 to 10 days. Mild and moderate cases are treated with atovaquone 750 mg twice daily and azithromycin 500 mg for one dose followed by 250 mg daily. Severe cases are often treated with clindamycin 600 mg every 6 to 8 hours and quinine 650 mg every 8 hours2; however, this regimen is not as well tolerated because of the side effects of these drugs. The most severe cases are those associated with significant parasitemia (>10%), hemolytic anemia, or end-organ failure, and such cases may be treated with exchange transfusion.1,2

Overall, babesiosis is a rare but clinically important cause of generalized weakness in elderly patients. A high degree of clinical suspicion must be present to make the diagnosis. Babesiosis should be considered in patients who have visited or live in endemic areas and have generalized weakness and flu-like symptoms on presentation. In particular, the diagnosis should be entertained in patients who have an absence of focal neurologic signs that would offer a more common alternative diagnosis, a lack of typical infectious etiologies, and in those who have a rapidly deteriorating course, such as occurred with the case patient.