A previously healthy 56-day-old girl presented with a 1-day history of brief episodes of breath holding and jaw and fist clenching. Her parents reported a 2 week history of increased fussiness in the girl, as well as 2 days of nasal congestion. She was irritable with positional change, such as when being picked up or laid down. There was no history of fever, poor or difficult feeding, or cyanosis. No true apnea was witnessed. Her prenatal course was benign, and her only known exposure was a mild upper respiratory tract illness experienced by her father 1 week prior to presentation.

The physical examination revealed unremarkable vital signs, but the girl was crying and was displaying several of the episodes described by her parents. Her crying was intermittently interrupted by approximately 1 second of facial grimacing, breath holding, and flexion of the arms occurring roughly every 10 seconds. The rest of the examination findings were unremarkable. The results of a laboratory workup revealed a white blood cell (WBC) count of 26,700/µL with 66% neutrophils, a platelet count of 502,000/µL, and a C-reactive protein (CRP) level of 7 mg/dL. Blood, urine, and cerebrospinal fluid cultures and viral studies for pertussis, influenza, and respiratory syncytial virus were negative, and chest radiography findings were unremarkable.

The patient was admitted and started on empiric cefotaxime and acyclovir, along with phenobarbital. Continuous video electroencephalography monitoring confirmed that her episodes were nonepileptic in origin. Vancomycin was added on day 3 of hospitalization in response to an increasing elevation of the WBC count, platelet count, and CRP level. 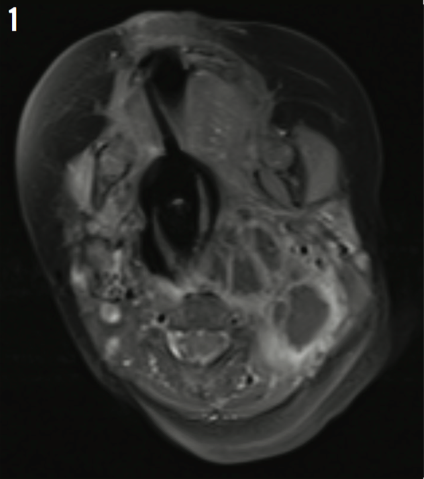 On hospital day 3, slight swelling of her left neck was noted. A magnetic resonance imaging study of the neck revealed a 3.2 × 4.3 × 2.3-cm retropharyngeal and paraspinal abscess (Figures 1 and 2). An interventional radiologist drained the lesion and collected 20 mL of purulent fluid, which subsequently grew methicillin-resistant Staphylococcus aureus (MRSA) on culture. The patient was treated with intravenous ampicillin-sulbactam and vancomycin for 8 days and later transitioned to oral clindamycin. Her symptoms ceased, and she recovered without complications.

Retropharyngeal abscess (RPAs) are rare but potentially dangerous deep neck space infections that arise from suppuration of retropharyngeal lymph nodes. They are often preceded by upper respiratory tract infections; however, they may also develop without prior symptoms. Common symptoms include fever, neck swelling or pain, sore throat, and torticollis.1-5 When the diagnosis is delayed, or when infection is severe, complications can include sepsis, mediastinitis, and airway obstruction.2 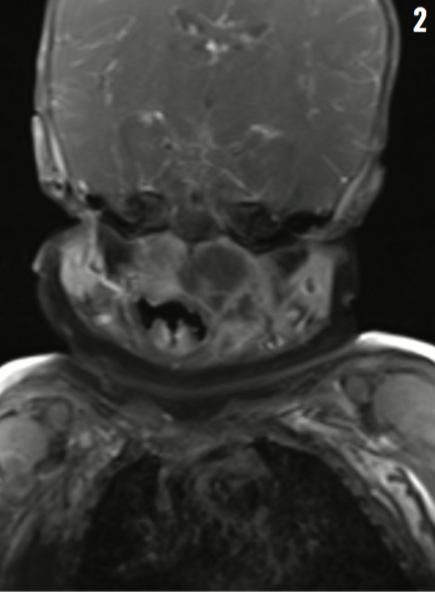 The median age of patients with RPA is 36 months, so our patient was quite an outlier.5 RPA has historically been treated with immediate surgical drainage.2,5 However, with advanced antibiotic coverage and improvements in critical care, more patients are being treated nonsurgically with antibiotics.3 The typical bacteria causing RPA have historically been group A streptococcus, anaerobes, and MRSA, but the incidence of MRSA infections is increasing.1,6 Thus, empiric coverage with anti-MRSA antibiotics may be warranted. The clinical factors that predispose a patient to MRSA infection are not clearly known; however, it is reasonable to empirically cover for MRSA in regions where MRSA skin and soft-tissue infections are common.6

Young infants can present with retropharyngeal infections and may not display the typical clinical features observed in older children. If RPA is suspected, empiric coverage for MRSA should be considered.

Yemisi Jones, MD, is an assistant professor at University of Cincinnati College of Medicine in Ohio.