An Atypical Presentation of Henoch-Schönlein Purpura With Intussusception

A 9-year old girl presented with her grandparents to the emergency department (ED) for intermittent crampy abdominal pain and daily nonbloody, nonbilious emesis that had begun 6 days previously. The last episode of emesis had occurred the night before her arrival to the ED.

According to her grandmother, the patient denied fever, cough, congestion, rhinorrhea, diarrhea (no blood or mucus), dysuria, and muscle or joint pain. She had no significant past medical history. The review of systems revealed a loss of appetite, vomiting, and abdominal pain.

She had been seen at multiple other facilities and ultimately had been referred to our tertiary hospital ED, where she received a diagnosis of small bowel intussusception via ultrasonography (Figures 1-3) and was admitted. A pediatric surgeon was consulted, and the patient underwent a computed tomography (CT) scan of her abdomen and pelvis. A review of the CT concluded that there was “more fluid in [the] pelvis than expected as physiologic. Additionally, one limited area of sigmoid colon with thickened walls. Intussusception seen on US [ultrasonogram] probably is the thickened sigmoid.” 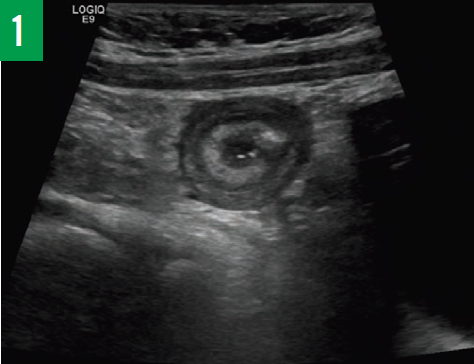 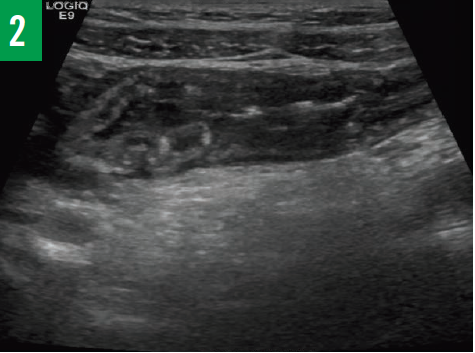 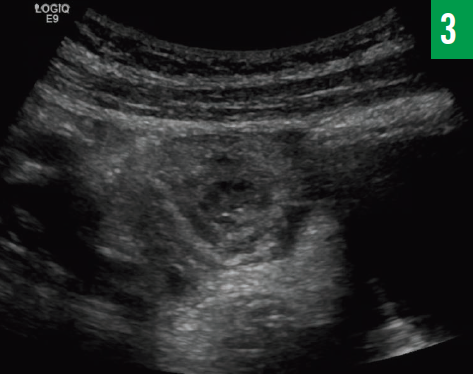 The girl’s symptoms resolved, and she was discharged home the next day without pain or recommended medications. A follow-up US scan confirmed that the intussusception had resolved.

Over the course of 5 days after discharge, she developed palpable purpura and petechiae on her lower extremities. She was taken to her pediatrician’s office, where she was given a diagnosis of Henoch-Schönlein purpura (HSP). Over the next few days, she was kept home from school and had no crampy abdominal pain until the early morning of her second visit to ED. According to her grandmother, she tried acetaminophen at home multiple times without relief. The patient was brought back to our ED, where the results of laboratory studies were unremarkable. An abdominal US was performed and revealed no intussusception. In the ED, intravenous fluids for rehydration and multiple pain medications (intravenous morphine) were required. She was readmitted for a second time with a diagnosis of HSP.

Physical examination during her first admission revealed a child in moderate distress, with voluntary guarding and legs drawn up toward her abdomen. She was afebrile with normal vital signs. Examinations of the head, ears, eyes, nose, throat, cardiovascular system, pulmonary system, and skin revealed normal findings. An abdominal examination elicited voluntary guarding and revealed a soft, nondistended abdomen with hypoactive bowel sounds and diffuse tenderness to palpation in the lower left quadrant.

Physical examination findings during the subsequent admission were significant for a few scattered warm, nonblanching, erythematous, light red-purplish macules and papules with diffuse petechiae on the lower extremities and buttocks but sparing the face, upper extremities, and trunk (Figures 4 and 5). Laboratory study results initially were significant for a slightly elevated C-reactive protein level of 0.8 mg/dL. Urinalysis results were negative for hematuria and proteinuria. US of the pelvis revealed small bowel intussusception located in the midline pelvis, with thickened walls, which persisted during the 90-minute US examination. 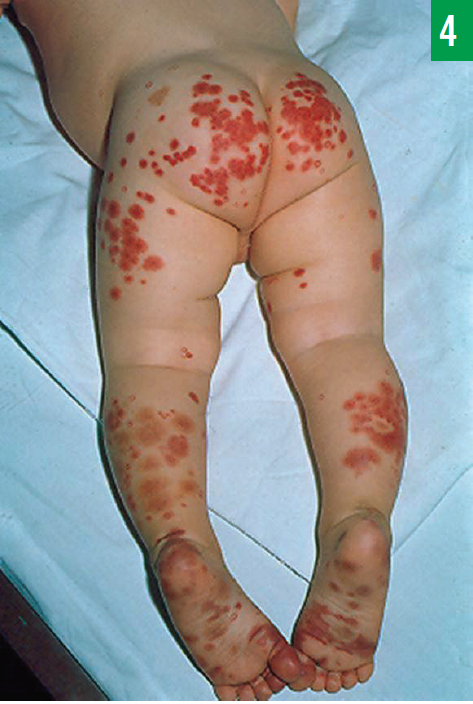 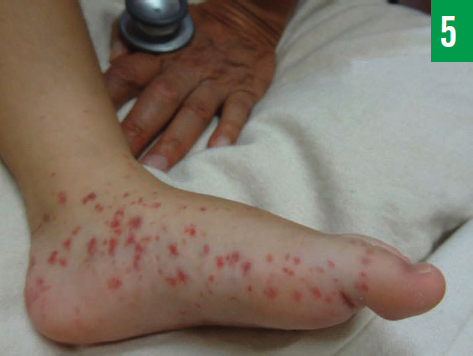 HSP, also known as immunoglobulin A–associated vasculitis, is an immune-mediated vasculitis with IgA deposition in small vessels. Most cases occur in the pediatric age group (3-15 years).1 According to 1990 guidelines from the American College of Rheumatology1 and 2006 revised international guidelines from the European League Against Rheumatism and the Paediatric Rheumatology European Society,2 HSP is described by a tetrad of classic clinical manifestations including arthritis/arthralgia, abdominal pain, renal disease, and palpable purpura in patients with neither thrombocytopenia nor coagulopathy (mandatory criterion) (Table).1-4

Laboratory findings on routine blood tests (complete blood cell count, comprehensive metabolic panel, and urinalysis) are nonspecific for the most part but may reflect an elevated level of C-reactive protein, a marker of inflammation and a possible trigger of HSP. However, the tetrad of HSP clinical manifestations varies in their presence and order of presentation, and this can present diagnostic challenges. Our patient’s case is an example of an incomplete or unusual presentation of HSP with intussusception.

Intussusception occurs when a leading proximal segment of bowel telescopes into the distal receiving segment of bowel (intussuscipiens) with associated mesentery in it. The receiving segment can become engorged and cause bleeding from the mucosa, resulting in a pathognomonic “currant jelly” appearance. Eventually, with prolonged intussusception, the arterial supply may become compromised and lead to bowel necrosis and/or shock.

Pathologic intussusception is mostly found in children older than 3 years and is likely due to a lead point lesion—a focal lesion in the intestine that is trapped by peristalsis and is dragged into the distal segment of the bowel. Possible lead points include Meckel diverticulum, polyps, neoplasms, appendicitis, cystic fibrosis, and HSP. Intussusception in HSP is a rare complication limited to the small bowel, such as the ileoileal portion (unlike idiopathic intussusception, which is most commonly ileocolic). It has a reported overall incidence of 2.3% to 3.5%.3 Intussusception in HSP is said to be due to purpuric lesions of the small bowel.5

The clinical diagnosis of HSP is generally established when a patient presents with classic tetrad symptoms. Nonetheless, when a patient has an unusual presentation of HSP that is difficult to diagnose, a biopsy of the skin or kidney may be done to confirm suspicion. A biopsy should reveal IgA deposition in the skin and mesangial structure of the kidney. Since laboratory findings are nonspecific, US is a noninvasive, cost-effective imaging modality with high sensitivity and high specificity that can be performed at the bedside to further investigate a patient’s condition, such as in our case. Abdominal imaging may show a target sign on cross-section that appears as 2 concentric circles, usually in the right upper quadrant; a crescent sign formed by the leading edge of the intussusception outlined by gas in the colon.6

HSP is self-limiting disease and generally resolves within 4 weeks. According to the American Academy of Family Medicine,4,7,8 the management of HSP is primarily aimed at providing supportive care and pain management to decrease morbidity and the risk of complications. Supportive care should adequately provide hydration. Depending on the severity of the abdominal pain, acetaminophen or nonsteroidal anti-inflammatory drugs may be used for mild to moderate pain. For severe pain, as in our case, hospitalization and morphine may be required to provide relief. Although no consensus exists on the use of corticosteroids, a 2007 systematic review suggests limited benefits in HSP.8,9 When given early in the course of HSP, corticosteroids have been effective for abdominal pain, arthralgia, and purpura.5,7,10 However, corticosteroids were not found to reduce the odds of kidney disease or complications such as intussusception.8 Therefore, clinicians must use discretion when choosing to use corticosteroids in the management of a patient with HSP.

The prognosis of HSP is generally excellent. Only approximately 4% of patients will have a reoccurrence within 4 months of resolution.6,11 It is recommended that patients have a follow-up visit with a primary care clinician that includes urinalysis and blood pressure measurement once or twice a week for the first month and every other month thereafter for the remaining year in order to identify and evaluate patients at high risk for late renal complications.8

In patients with unusual presentations of HSP, where a purpuric rash initially is absent, a broad approach must address other possible causes for the abdominal pain, arthritis/arthralgia, and renal symptoms. If intussusception is suspected, it is important to use US, which can better visualize the ileoileal bowel thickness, peritoneal fluid, and intussusception than other imaging modalities. In our case, bedside US was the first choice of imaging and revealed the intussusception.

Alicia Morrison, MS-IV, is a medical student at the Charles E. Schmidt College of Medicine at Florida Atlantic University in Boca Raton, Florida.

Heidi Cohen, MD, is in the Emergency Department at Joe DiMaggio Children’s Hospital in Hollywood, Florida.

Randi Sperling, DO, is an assistant professor of clinical biomedical science at the Charles E. Schmidt College of Medicine at Florida Atlantic University in Boca Raton, Florida.

Liora Adler, MD, is in the Emergency Department at Joe DiMaggio Children’s Hospital in Hollywood, Florida.

Sarah Wood, MD, is an associate professor of clinical biomedical science and the senior associate dean for medical education at the Charles E. Schmidt College of Medicine at Florida Atlantic University in Boca Raton, Florida.