An 11-year-old Caucasian boy with intermittent fever for the past 5 days presented to the local school-based health center accompanied by his mother. The mother reported that her son had spikes in temperature up to 40.3°C (104.5°F), without associated symptoms. He was initially evaluated by a local physician who diagnosed a “virus” and was sent home with instructions to use antipyretics as needed. The fever persisted and by the morning of presentation a nonpruritic rash had developed on the lower extremities. No family members in the household had similar symptoms. The child took no medications other than acetaminophen and ibuprofen and had no drug or environmental allergies. Past medical history was unremarkable.

Physical examination revealed an alert, healthy-appearing boy. Vital signs, including temperature (36.8°C [98.3°F]) and heart rate (76 beats per minute), were normal. His lips appeared full with a prominent red-purple hue, and multiple red petechial lesions were noted along the hard palate and buccal mucosa (Figure 1). Cervical lymphadenopathy was not evident. A pink-red, papular eruption was noted along the lower abdomen, proximal thighs, and buttocks (Figure 2). Some swelling of the hands and feet was noted. Abdomen was soft and nontender. Neurological examination revealed no abnormalities.

An echocardiogram showed no significant abnormalities. The pediatric cardiology consultant agreed with the diagnosis of atypical Kawasaki disease.

Intravenous immunoglobulin (IVIG) and high-dose aspirin therapy 80 mg/kg/d divided in 4 doses) were initiated. The fever and symptoms subsequently resolved, and the patient was discharged home after an 8-day hospitalization. 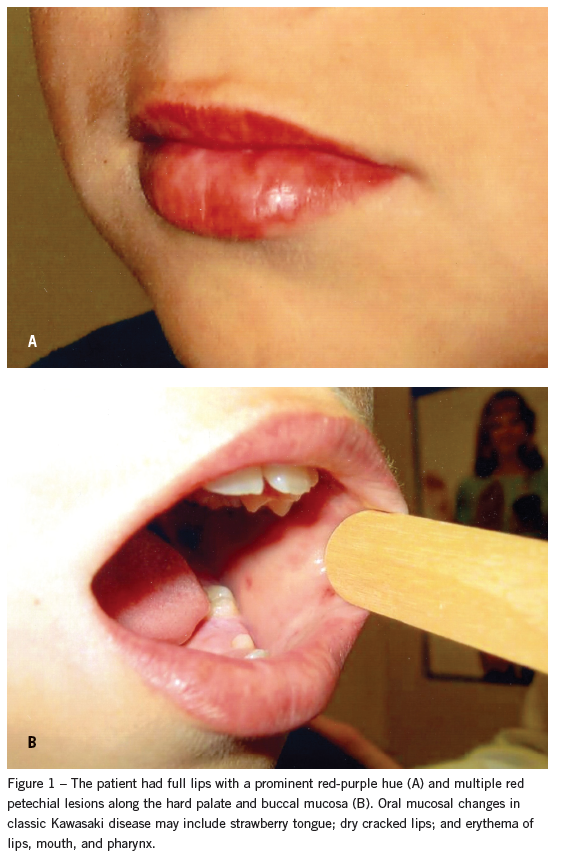 Kawasaki disease is an acute febrile vasculitis first described by the Japanese physician Tomisaku Kawasaki in 1967.1 The disease occurs worldwide, with the highest incidence in Asians and the lowest incidence in Caucasians. Approximately 80% of cases occur in those younger than 5 years.2 Rarely the disease may occur in adolescents and adults. About 3000 cases are diagnosed in the United States annually.2 It is the leading cause of acquired heart disease among children in developed countries.3

The complications of untreated Kawasaki disease can be fatal. It is imperative that the diagnosis be established promptly so that treatment with IVIG and high-dose aspirin therapy may be provided.4-6 Coronary artery sequelae—usually aneurysms—with the potential for thrombosis, stenosis, and sudden death may occur in 20% of untreated cases of Kawasaki disease.7 An echocardiogram is required to identify coronary artery morphology and to assess cardiac function and coronary artery dimensions.2,8 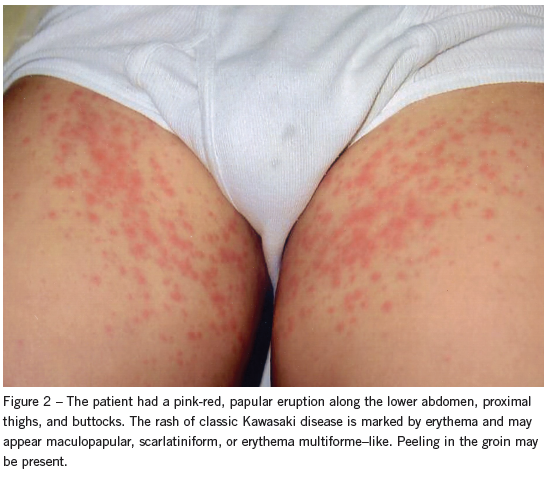 •Two of 5 clinical features in classic cases (including conjunctival injection, oral mucosal changes, erythema and swelling of hands and feet, erythematous rash on trunk and extremities, and cervical adenopathy).

The clinician should consider Kawasaki disease in the differential diagnosis when the clinical signs and symptoms of the disease are evident in patients older than 5 years.