A 12-year-old obese African American boy with a history of atopic dermatitis presented to the emergency department with a history of increasing lower extremity pruritus and edema. He recently had been treated with a 10-day course of oral clindamycin for infected atopic dermatitis of the legs, with minimal response. His symptoms had worsened in the 2 days preceding this visit. He denied fever, cough, shortness of breath, and insect bites. His past medical history is remarkable for severe atopic dermatitis and intellectual disabilities.

Physical examination showed a temperature of 37.1°C (98.8°F), a heart rate of 112 beats per minute, a respiratory rate of 21 breaths per minute, and a blood pressure of 117/65 mm Hg. His left leg, left ankle at the lateral malleolus, and left foot were swollen and erythematous, with open, foul-smelling lesions, and are tender to palpation. 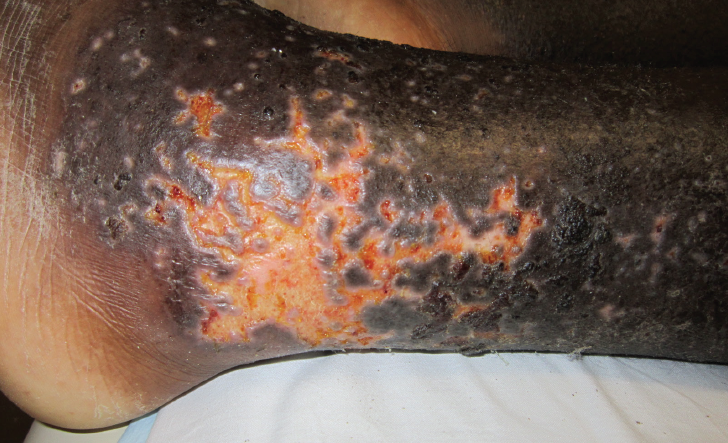 Laboratory test results showed a white blood cell count of 8,400/µL. Radiographs of the left lower extremity showed soft-tissue swelling. Ibuprofen and intravenous clindamycin were initiated, and he was admitted to the pediatrics department.

At the time of admission, physical examination of the patient was remarkable for hyperpigmented patches with lichenification of the skin of both legs, with some areas of excoriation. The left leg was warm and tender from the dorsal foot up to the lower calf, including the left lateral malleolus. Drainage of a yellowish, serosanguineous, and malodorous fluid was noted.

Two days later, umbilicated vesicles and a number of lesions with a punched-out appearance—the characteristic lesions of eczema herpeticum—developed on top of the lichenified skin typical of atopic dermatitis (Figures).

The results of viral culture, which grew herpes simplex virus (HSV), and bacterial culture of the open lower extremity wounds, which grew Staphylococcus aureus and Escherichia coli, confirmed the diagnosis: This patient with severe atopic dermatitis also had eczema herpeticum along with a superimposed bacterial infection.

After consultation, the infectious disease specialist recommended treatment with ciprofloxacin, vancomycin, and rifampicin. The dermatologist recommended acyclovir therapy for the comorbid eczema herpeticum, plus topical emollient cream for improving the skin lesions and lichenification. 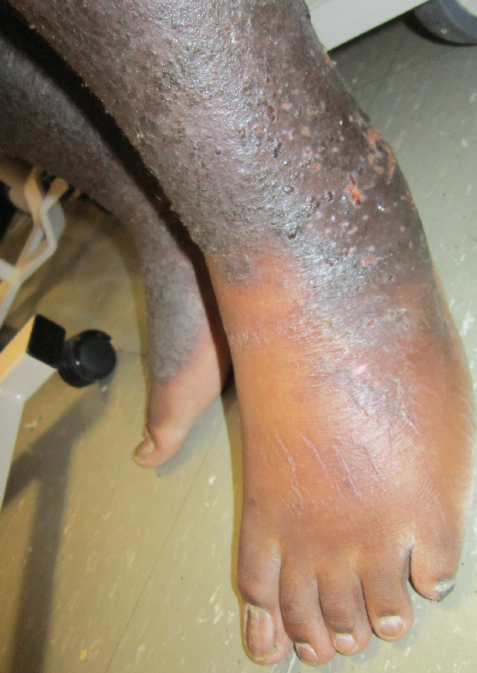 Atopic dermatitis, or eczema, is the most common chronic relapsing skin disease of infancy and childhood. It affects 10% to 30% of children worldwide. Patients with atopic dermatitis have increased susceptibility to bacterial, viral, and fungal skin infections. S aureus is found in more than 90% of atopic dermatitis skin lesions.

Eczema herpeticum is an overwhelming infection of the skin with HSV (typically HSV-1) in patients who have an underlying eczematous skin disease, usually atopic dermatitis. Eczema herpeticum can occur in persons of all ages but is seen more commonly in children of approximately 2 to 3 years of age as a result of primary HSV infection.

Left untreated, cutaneous HSV infections can be severe, progressing to disseminated infection and even death. Recurrent infections are common
but generally are less severe than the initial infection.

David Effron, MD, is the series editor and assistant professor of surgery at Case Western Reserve University, attending physician in the department of emergency medicine at the MetroHealth Medical Center, and consultant emergency physician at the Cleveland Clinic Foundation, all in Cleveland.