A 10-year-old girl, who was the restrained backseat passenger on the right side side of a car that was involved in head-on motor vehicle collision with an 18-wheeler truck, was brought to the emergency department (ED). Per emergency medical services, the patient had a Glasgow Coma Scale (GCS) score of 3 in the field, and she entered the ED on a backboard with a cervical collar and a nonbreather mask in place. Intubation had not been attempted in the field. Upon presentation, the patient was intubated secondary to 2 episodes of emesis. Her GCS score had improved to 7 upon arrival.

On examination, the girl had an abrasion to the right temporal area, was responsive to pain only, and had minimal eye opening. Her pupils were equal, round, and reactive to light, initially with bilateral eye movement to the left, which later became midline. Physical examination results were unremarkable except for limited left upper extremity motor movement in her arm. Computed tomography (CT) of the cervical spine without contrast suggested high attenuation between C1 and C2 and a small amount of blood in this region (Figure 1). The C1 occipital distance on the right appeared slightly increased compared with the left, and a small calcification and fracture on the left occiput was noted. Magnetic resonance imaging (MRI) of the cervical spine without intravenous contrast showed multiple ligament tears, including the ligament between basiocciput and posterior ring of C1, interspinous ligament between C1 and C2, interspinous ligament between C6 and C7, and a tear of ligamentum flavum at C6-C7 (Figure 2). Also noted was a probable contusion and/or axonal injury on the right side of the brainstem (Figure 3). Based on the imaging studies, the girl received a diagnosis of atlanto-occipital dislocation (AOD).

AOD, also known as internal decapitation or orthopedic decapitation, describes a rare medical condition in which the skull separates from the spinal column during severe head injury. First described by Blackwood in 1908, this condition presents when there is a ligamentous disruption of the cervical spine with severe flexion of the neck.1 Typically seen in frontal impacts from motor vehicle accidents and from vehicle and pedestrian collisions, AOD is usually fatal as it involves nerve damage around the craniocervical junction or severing of the spinal cord.2

If patients survive the initial injury, they are usually left with significant morbidity in the form of neurologic injury, quadriplegia, and respiratory paralysis. Mortality is not uncommon. Quadriplegia results from damage to the descending motor axons of the corticospinal tract. Incomplete injuries may also occur with varying degrees of cervical spine injury.3 Although survival rates of AODs have increased in recent years, morbidity remains prevalent.4 Improvements in early on-scene management and quality of care in the ED and intensive care unit have attributed significantly to the improved survival rates.5 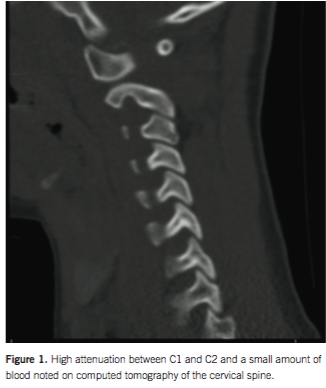 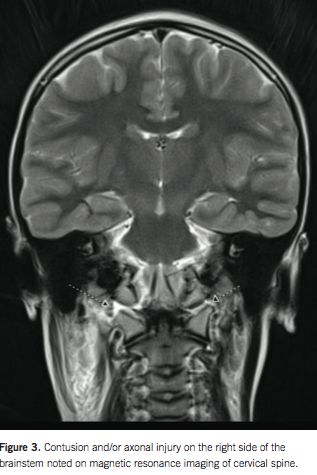 The AOD may be complete or incomplete. Three types of complete AOD have been described. Ventral dislocation (type I) is the most common, axial dislocation (type II) is typically the most unstable, and dorsal dislocation (type III) is the rarest. Incomplete forms of AOD represent subluxations of the atlanto-occipital junction. The atlanto-occipital, lateral atlanto-axial, and median atlanto-axial articulations are functional components of a spherical joint. The rigidity is largely dependent on the surrounding ligamentous structures, namely the membrane tectoria and the bilateral ligaments alaria, which serve to stabilize the joint.6 Children sustain AODs more often because of their large heads and short necks with increased laxity of the ligamentous structures, and flat articulation between the occiput and the atlas.7 Additionally, airbag deployment has been implicated as a cause of AOD in children.

Diagnosis is facilitated by plain radiographs and CT scans. MRI is superior to CT for visualizing soft tissue injuries, ligamentous disruption, spinal cord edema, and hemorrhages. The radiologic measurements used to determine AOD presence on lateral cervical spine CT are the Powers ratio and basion-axial interval-basion dental interval (BAI-BDI) method.8,9 The Powers ratio is most useful if the dislocation is anterior. Two distances are measured. The first is the distance between the opisthion and the anterior ring of C1; the second is the distance between the basion and the posterior ring of C1. The second distance is then divided by the first to obtain the ratio. A ratio greater than 1.0 should heighten suspicion for AOD.9 The BAI-BDI method measures the distance between the most anterior and inferior portion of the skull and the tip of the dens. The BDI should not exceed 12 mm.8 Due to the risk of radiation exposure, multiple CTs are not advised.

Our patient had type I AOD and was taken to the operating room for repair of traumatic cerebrospinal fluid leak with a dural patch, occipital to C2-C3 fusion with arthrodesis, and C6-C7 fusion with lateral mass screws. Following surgical stabilization, she was extubated and ultimately transferred for rehabilitation. Persistent neurological deficits included asymmetric upper extremity strength, which improved during her rehabilitation therapy. One year following her injury, she has returned to school, resumed a normal life, and has no residual deficits.

In conclusion, AOD is often a devastating injury but with improvements in diagnostic means, intensive care, and surgical technique, patients may survive with significant neurologic recovery.

Stephen Winfield, MD, is a resident at The University of Vermont in Plattsburgh, New York.

Katelyn Hopper, MD, is a resident at Louisiana State University in Shreveport.