Asymptomatic Leukocytosis in an Elderly Man

An 81-year-old man is seen for follow-up of leukocytosis detected during a recent hospitalization for community-acquired pneumonia. The leukocytosis had not resolved by the time he was discharged.

Before this admission, the patient was healthy and had not been hospitalized for many years. He has hypertension, which is well controlled with an angiotensin-converting enzyme inhibitor, and mild symptoms of prostate enlargement. He also takes a statin for hypercholesterolemia and aspirin, 81 mg/d.

This well-developed man appears his stated age. Vital signs are normal. Examination of the head, ears, eyes, nose, and throat reveals good mucosal color and no abnormalities. Firm nodes, 1 to 2 cm in diameter, are palpable bilaterally in the cervical area. A single similar lymph node is palpable in the left axilla. Lungs and heart are normal. There is no palpable enlargement of the liver or spleen.

Which of the following is the most appropriate next step?

A.  Order a Monospot test and heterophile antibody titer.

B.  Schedule outpatient surgical removal and biopsy of the lymph nodes.

C.  Arrange for a bone marrow aspiration and biopsy.

This patient’s peripheral blood smear results strongly suggest chronic lymphocytic leukemia (CLL). Most patients with CLL have a clonal proliferation of B lymphocytes. Currently, the most convenient method of diagnosis is flow cytometry of the peripheral blood (choice D), which reveals a monoclonal population of CD5+ and CD20+ lymphocytes in affected persons. Flow cytometry can replace bone marrow examination in many patients; however, marrow biopsy is often useful for staging and prognosis.1

Before the advent of flow cytometry, marrow examination was the diagnostic modality of choice; a finding of mature lymphocytes in excess of 30% confirmed CLL.2  Some recent studies purport to show that specifics of morphology, such as lymphocyte differentiation and histologic morphology, have prognostic significance and should be evaluated in all patients with CLL.2 Other studies suggest that molecular and cellular markers, such as mutations in the specific immunoglobulin heavy chain variable region (IgVH) and the presence of CD38 markers on the malignant lymphoid clone, may correlate better with clinical course than does marrow morphology.3

Many clinicians still obtain a marrow biopsy specimen, which is a good source of material for further flow cytometry and for analysis of genetic/molecular markers. However, the current standard of care for initial diagnosis, particularly in an 81-year-old man who is an unlikely candidate for highly aggressive therapies regardless of the stage of his disease, is flow cytometry of peripheral blood.

An even more invasive procedure—lymph node biopsy (choice B)—can also serve as a source of cells in specific cases (eg, in younger patients). However, this procedure is seldom routinely performed any more, for the same reasons that marrow biopsy is less often used.

Another condition, chronic myeloid leukemia (CML), can also cause an asymptomatic leukocytosis, but one characterized by different cells—a markedly left-shifted myeloid series with polymorphonuclear forms, band forms, metamyelocytes, myelocytes, and sometimes a few blast forms. A BCR-ABL, Philadelphia chromosome study (choice E) can confirm a diagnosis of CML. However, CLL and CML can usually be differentiated on the basis of a smear.

Acute mononucleosis, most commonly caused by Epstein-Barr virus (EBV) infection, can also cause lymphocytosis. EBV mononucleosis is diagnosed with a Monospot test and a heterophile antibody titer (choice A). However, this patient’s age, blood findings, and clinical presentation make mononucleosis very unlikely. Most adults (more than 99% by age 50 years) have been exposed to EBV and have IgG antibodies to it. Thus, clinical EBV mononucleosis is extremely uncommon in elderly patients. Moreover, in the rare instances in which older persons do contract mononucleosis, a clinically apparent systemic and febrile illness usually develops; such an illness is absent here. Finally, smear findings in mononucleosis are characterized by “reactive” or somewhat immature lymphoid forms. 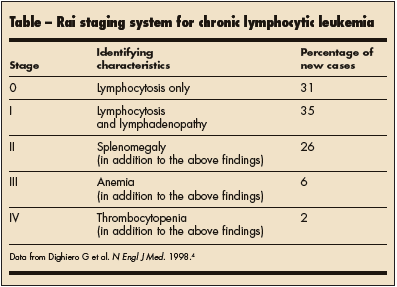 Outcome of this case. Flow cytometry revealed a population of monoclonal B cells, which included CD20+ , CD5+ , and CD38 . Ultrasonography revealed a normal-sized spleen. Stage I CLL was thus confirmed. A clinical therapeutic decision was made to monitor the patient with serial blood counts and examinations.