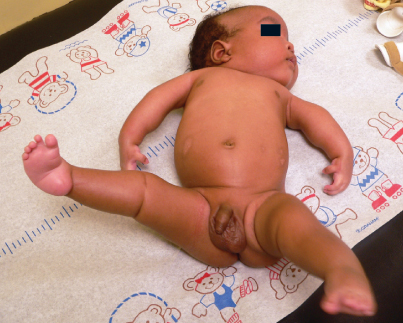 This male newborn delivered via cesarean section at full term was noted to have multiple contractures of the upper and lower extremities. Prenatal history was unremarkable.

Congenital contractures—joints that become permanently fixed in a bent (flexed) or straightened (extended) position and result in complete or partial restriction of movement—can be isolated to one area of the body or affect multiple areas.1 The latter presentation is referred to as arthrogryposis or arthrogryposis multiplex congenita (AMC). Amyoplasia, characterized by multiple congenital contractures in symmetrical distribution involving all 4 limbs and replacement of skeletal muscle by dense fibrous tissue and fat, is the most common type of AMC.2

AMC is a rare nonprogressive disorder, occurring in 1 in 3000 live births.3 Many causes have been proposed, including reduced intrauterine movements in oligohydramnios, uterine septum, multiple pregnancies, prenatal virus infection, fetal vascular compromise, muscle and connective tissue developmental abnormalities, and CNS and spinal cord malformations. A small percentage may be genetic.

Prenatal assessment has focused primarily on decreased fetal movement and the presence of skeletal deformities. These finding are generally evident on ultrasound imaging after 16 to 18 weeks of gestation.3

The distribution of involvement of multiple congenital contractures is variable. Complications may include scoliosis, lung hypoplasia, respiratory problems, growth retardation, midfacial hemangioma, facial and jaw variations, and abdominal hernias. Most children with AMC survive; however, a few die in infancy as a result of involvement of respiratory muscles. Mental retardation in association with AMC has been reported.

Although the condition is irreversible, orthopedic correction of the deformities can improve function. Treatment must be individualized based on the child’s needs. A multidisciplinary approach, including physical therapy, serial casting, orthosis, facture management, and surgery, is recommended. Contractures often recur despite treatment, especially in skeletally immature patients.4 In a child with normal intelligence, independent ambulation and function can be expected with early, aggressive management of the deformities.5