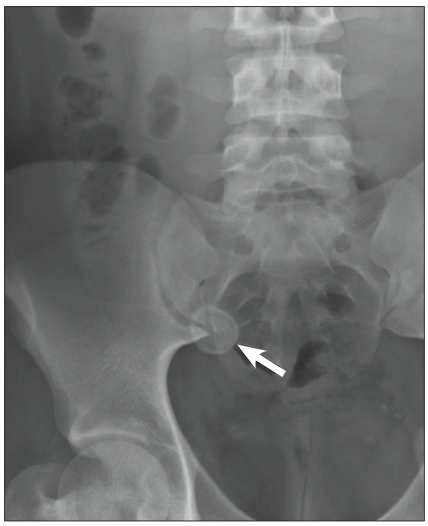 Over the past 24 hours, an 18-year-old boy had generalized abdominal pain and fever. On presentation to the emergency department, he was febrile, with a temperature of 38.3ºC (101ºF), and tachycardic (heart rate, 120 beats per minute); blood pressure and respiration rate were normal. He had a past history of intermittent asthma. Abdominal examination elicited tenderness over the right iliac fossa. The remaining examination findings were unremarkable.

An abdominal radiograph revealed a round calcification overlying the sacroiliac joint (arrow) suggestive of an appendicolith. A CT scan of the abdomen showed an appendicolith of 2.2 cm in diameter with a dilated appendix. During laparoscopic appendectomy, a perforated appendix with an appendicolith was found. The diagnosis of acute gangrenous appendicitis was confirmed by histopathologic examination.

Fecaliths formed by calcium salts and fecal debris layered and lodged in the appendix are called appendicoliths or appendiceal fecaliths and are a known cause of appendicitis in children. However, they have also been identified in asymptomatic persons. Appendicoliths may cause right iliac fossa pain in the absence of obvious appendiceal inflammation.1

A retained, or dropped, appendicolith is a rare complication that can occur as a consequence of stone expulsion from the appendix before or during appendectomy. A retained appendicolith after appendectomy can manifest as an abscess or, less commonly, as a fistula and nonhealing wound.6 This patient recovered well without complications.

2. Lowe LH, Penney MW, Scheker LE, et al. Appendicolith revealed on CT in children with suspected appendicitis: how specific is it in the diagnosis of appendicitis?AJR Am J Roentgenol. 2000;175(4):981-984.