An 11-year-old boy presented to the pediatric emergency department with a concern of a possible foreign body in the left nostril, with blockage of the left nasal cavity, for the past 2 weeks. He also had a sensation of a mass being present on the same side. 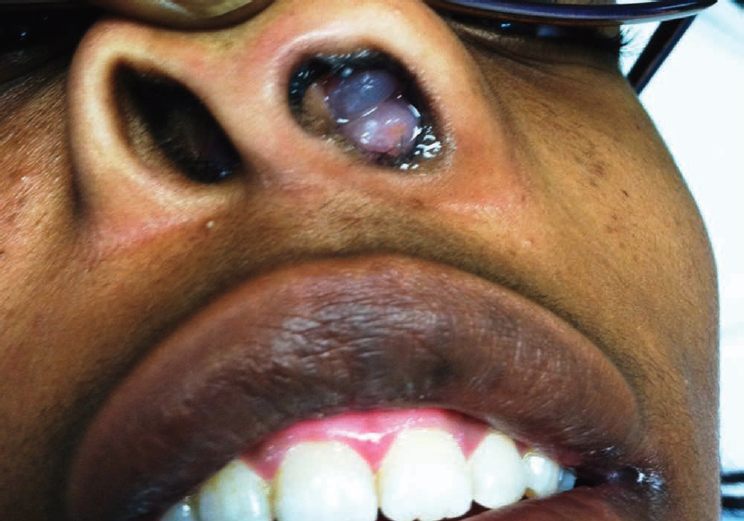 He did not complain of runny nose, mouth-breathing, or a decreased sense of smell. He had no history of recent fever, shortness of breath, chronic sinusitis, allergy, or long-term aspirin use.

On physical examination of the nose, a pinkish-gray, grapelike growth was visualized in the left nasal cavity. It was nontender, had a fleshy feel, and did not bleed upon being touched with forceps. The other nasal cavity was normal, and there were no other significant findings on physical examination. The patient was referred to otorhinolaryngology for further management.

The patient subsequently was treated with topical fluticasone and systemic prednisone for 2 weeks without improvement. Surgical polypectomy was done, and biopsy results confirmed the diagnosis of antrochoanal polyp.

Although the etiology of antrochoanal polyps remains unknown, some authors have implicated allergic or inflammatory causes.2 Chronic sinusitis and cystic fibrosis also have been implicated.

While unilateral nasal obstruction is the most common symptom, other symptoms can include rhinorrhea, epistaxis, postnasal drip, and snoring.

The differential diagnosis includes foreign body in the nostril and other masses that have a maxillary antral component, such as mucocele, mucopyocele, inverted papilloma, and allergic fungal sinusitis.3 Apart from causing the characteristic symptoms, antrochoanal polyps can cause additional health hazards ranging from obstructive sleep apnea syndrome to swallowing disorders and cachexia.4 Thus, early diagnosis of a nasal polyp becomes greatly important. Recommended imaging studies for suspected nasal masses of unknown etiology in teenagers and young adults include computed tomography with contrast enhancement in axial and coronal planes.5