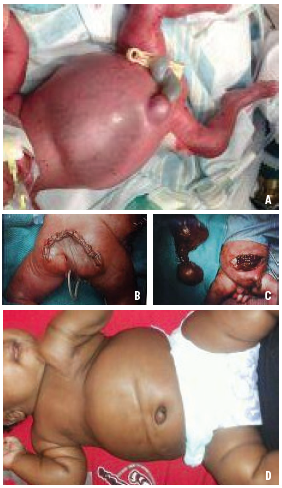 To the Editor: I read with great interest Dr Alexander K. C. Leung’s Photo Essay featuring an infant with sacrococcygeal teratoma (“Are These Lumps Benign or Reason for Worry?” Consultant for Pediatricians, July 2013, page 327).1

I have a patient whose sacrococcygeal teratoma was diagnosed in utero. As the tumor grew and displaced her intra-abdominal organs, the threat of hydrops prompted an emergency cesarean delivery at 28 weeks of gestational age. The infant’s birth weight was 1,875 g (A), and it was estimated postoperatively that her tumor accounted for approximately a quarter of that weight. She was taken immediately to the operating room, and the mass was removed in 2 segments, with both an anterior and a posterior approach (B and C). The infant spent several weeks in the neonatal intensive care unit and had an uncomplicated postoperative course (D).

In Reply: I thank Dr Wilbur for her interest in my Photo Essay and her description of a newborn infant with an in utero diagnosis of sacrococcygeal teratoma.

It is known that fetuses with large sacrococcygeal teratomas are at risk for a high cardiac output state and cardiac failure. In a retrospective study of 31 patients with sacrococcygeal teratomas, Coleman et al2 found that patients with a ratio of tumor volume to estimated fetal weight greater than 0.16 were 17 times more likely to develop a high cardiac output state and hydrops (P = .001) with 81.25% sensitivity and 86.67% specificity.

The infant described by Dr Wilbur had a total tumor volume to estimated fetal weight ratio of approximately 0.25 and was therefore at high risk for high cardiac output state and hydrops.

For tumors that are resectable, complete resection of the tumor and the coccyx is essential, because failure to remove the coccyx will result in local recurrence in approximately 30% of cases.3 If the tumor is not resectable, chemotherapy may shrink the tumor and render it resectable. Postoperative complications can include fecal incontinence, constipation, neurogenic bladder, and vaginal prolapse.4-6 It is nice to learn that the infant described by Dr Wilbur had an uncomplicated postoperative course.

Discerning Child Abuse From Its Mimics

To the Editor: We set out to identify the medical conditions that mimic child abuse, with the goal of not missing the diagnosis of any child who has been abused.

We searched the PubMed database using the search terms “misdiagnosis” and “child abuse.” From among the results, we reviewed more than 20 cases in which a child initially had received a diagnosis of physical abuse but whose condition later was determined to have a medical etiology. For each reported case, we reviewed the type of abuse originally diagnosed, the reason for suspicion of abuse, the final (correct) diagnosis, and how the final diagnosis was made.

Because so many conditions mimic child abuse, clinicians must very carefully evaluate children in whom abuse is suspected so as not to misdiagnose a medical etiology, which could have dire consequences for the patient and the family. To that end, we offer a guide for assessing physical injuries (Box), which includes taking a good history, performing a thorough physical examination, ordering appropriate diagnostic tests, and seeking expert consultation as needed.