Page kidney is the external compression of the renal parenchyma by a hematoma or mass, resulting in activation of the renin-angiotensin-aldosterone system and subsequent hypertension, which can lead to renal failure. It has been postulated that renal ischemia from the compression is responsible for activating the renin-angiotensin-aldosterone system, causing hypertension by increasing the body’s absorption of salt and water.1 Although any form of compression can cause Page kidney, most cases have been attributed to subcapsular hematomas.2 Page kidney was first described in an animal model in 1939 by Irwin Page,3 who inadvertently induced the condition after tightly wrapping cellophane papers around a dog’s kidneys in an attempt to prevent the development of renal cortical collateral circulation. In 1955, Page and Engel4 reported the first clinical case in a football player who developed hypertension and was subsequently found to have a subcapsular hematoma.We report a case of a ruptured angiomyolipoma (AML) presenting as Page kidney and review the diagnostic and therapeutic challenges we encountered when managing this case. 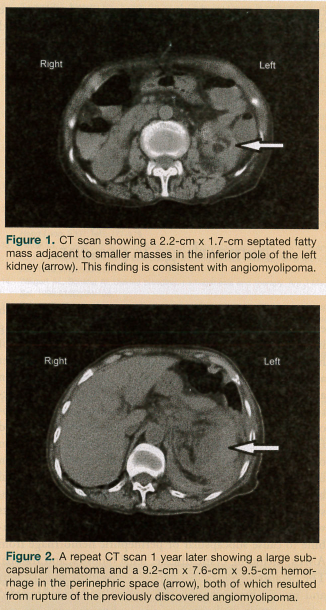 A 76-year-old Asian woman came to our clinic for a nephrology evaluation per the recommendation of her primary care physician. Upon presenting to the clinic, she had an elevated blood urea nitrogen (BUN)-to-creatinine ratio but no uremic symptoms. She had no significant medical history. On physical examination, her blood pressure was 140/90 mm Hg and her heart rate was 82 beats per minute. Her glomerular filtration rate at that time was estimated to be 45 mL/min. The initial workup for stage 3 chronic kidney disease revealed renovascular disease with mild hypertension, secondary hyperparathyroidism, and a urine protein-to-creatinine ratio of 644 mg/g. A computed tomography (CT) scan at that time revealed a 2.2-cm x 1.7-cm AML in the inferior pole of the left kidney. The right kidney was grossly normal (Figure 1). The patient elected a conservative approach and was treated with an angiotensin-converting enzyme inhibitor, iron, paracalcitriol, sodium bicarbonate, erythropoietin, and sevelamer hydrochloride. She had regular follow-up at the clinic with no evidence of worsening clinical status and her renal function remained stable.

A diagnosis of Page kidney resulting from the spontaneous rupture of an AML was made. She was treated with antihypertensives (enalapril, amlodipine, and metoprolol), and hemodialysis and interventional radiology-guided embolization therapy were planned; however, she refused any further diagnostic or therapeutic interventions, including dialysis, despite an adequate understanding of the implications of her decision. Her wishes and cultural values were honored, and she was evaluated by the palliative care team and eventually discharged to home hospice.

AML is a kidney tumor that contains fat, smooth muscle, and thick-walled vessels. It is usually benign, but malignant transformation has been reported.5 The incidence of AML is 0.3% to 3% in the general population, and these tumors are more common in women.6 AMLs are associated with tuberous sclerosis in 20% of cases and are isolated (sporadic) in 80% of cases.6 Regardless of their etiology, AMLs are caused by a mutation in either the TSC1 or the TSC2 gene, which govern cell growth and proliferation. AMLs are usually slow growing, but can extend through the renal capsule into the perinephric space, displace or compress the renal parenchyma, and distort the collecting system, leading to eventual renal destruction. Because the thick-walled vessels of AMLs lack elastic tissue, they are predisposed to dilatation, aneurysm formation, and spontaneous hemorrhage. Most patients with AMLs are asymptomatic and the masses are found incedentally.7 Findings in symptomatic patients may include flank pain, a renal mass, hematuria, hypovolemic shock, or a combination of these findings.8

Page kidney occurs as a result of chronic, long-standing compression of one of both of the kidneys, which activates the renin-angiotensin-aldosterone system, leading to hypertension. The accumulation of blood in the perinephric  or subcapsular space compresses the involved kidney, resulting in renal ischemia and high-renin hypertension. As previously noted, Page kidney was first described in a dog in 1939,3 and the first human case was reported in 1955 in a young male athlete.4 In this case, a subcapsular hematoma caused the compression that led the patient to experience markedly elevated blood pressure. After he underwent a nephrectomy, his hypertension resolved. In 2005, Vanegas and colleagues9 attributed hypertension in Page kidney to inflammatory damage caused by the external compression of the kidney. Other reported causes of Page kidney include complications from a transplant biopsy, traumatic injury from a sporting activity, trauma from a motor vehicle accident, acquired renal cysts, polyarteritis nodosum with aneurysmal rupture, and paraganglionomas.10-13 Our case report appears to be the first in the published literature describing ruptured renal AML leading to Page kidney and renal failure requiring dialysis.

Bleeding abnormalities are common in patients with end-stage renal disease, and the etiology of uremic bleeding in these patients is multifactorial, involving all three steps of hemostasis: platelet adhesion, granule release, and platelet aggregation.14 Patients have complex platelet dysfunction and abnormal platelet-vessel wall interaction. Defective activation of both glycoprotein IIb/IIIa receptors and cyclooxygenase activity, decreased production of von Willebrand factor, increased uremic toxins, and increased production of nitric oxide and prostacyclin have all been implicated in uremic bleeding.14,15 Cases of spontaneous retroperitoneal bleeding and subcapsular and perinephric hemorrhage resulting from uremic bleeding have been reported in patients with end-stage renal disease.16 Several factors often combine to cause subcapsular or perinephric hemorrhage from AMLs, including cystic disease, renal biopsies, and trauma. The hemorrhage is more likely to occur in uremic patients and mostly happens with the rupture of an unsupported sclerotic artery in the cystic walls, a phenomenon that may be promoted by hypertension.

Diagnosis of Renal Angiomyolipomas
In the past, it was almost impossible to correctly diagnose AML preoperatively, and most patients underwent nephrectomy on the basis of an incorrect diagnosis of renal carcinoma. Today, the widespread availability of abdominal CT scans, renal ultrasonography, and magnetic resonance imaging (MRI) have made an accurate preoperative diagnosis possible in many centers, thereby preventing unnecessary nephrectomies.

The diagnostic tool of choice in renal AML is abdominal CT scanning,7 as was used for the case patient. This modality helps to differentiate AML from other renal masses by accurately characterizing the mass and enabling the extent of any concomitant hemorrhage to be determined. The finding of a fat density in a noncalcified renal mass is indicative of AML.17 When calcification is observed, renal cell carcinoma is the most likely differential diagnosis. Ultrasonography is standard for all AML cases and is particularly sensitive to the presence of fat in these lesions, which appears hyperechoic, but this modality is less sensitive to solid components.16 Moreover, ultrasonography is not specific for AMLs and does not enable these lesions to be measured accurately, especially when AMLs are large and hemorrhage is present. MRI can also be performed, but is more time-consuming and may require sedation. In addition, some patients with AML have tuberous sclerosis with associated learning and behavioral problems, thereby making MRI a less favored choice.

Treatment of Renal Angiomyolipomas
When an AML increases in size or becomes symptomatic, embolization via the renal artery should be considered to prevent rupture, a devastating complication that necessitates interventional therapies to stop the bleeding. Management of a ruptured AML involves controlling hypertension. Some bleeding subsides through the use of analgesics, restriction of activity, and correction of coagulation abnormalities. If the bleeding does not subside or if the bleeding appears very severe, interventional radiology angiography with or without embolization can be undertaken.18,19 Rarely, some patients require surgical intervention with total or subtotal nephrectomy.

Treatment of the case patient was hindered by her decision to avoid any intervention except for medications. The patient understood the implication of this decision. When patients demonstrate no impairment in decision-making capacity, little can be done without their consent, even when it is clear that treatment refusal will lead to their demise. Numerous factors may cause a cognitively intact patient to refuse treatment, including his or her cultural beliefs, the misinformed opinions of the patient’s family members or friends, and the patient’s fear of the unknown.20 Conneen and colleagues21 reviewed a group of patients who refused therapeutic interventions for end-stage kidney disease and noted that although the decision of a competent patient to stop dialysis must be honored, some deaths might be preventable if such patients are prospectively followed and treated by persons who understand the behavior of chronically ill patients.21 Patient education plays a significant role in the management of end-stage kidney disease and other chronic conditions, and when patients refuse needed treatments, behavioral experts may be able to employ strategies to get these patients to rethink their decision. In an ideal world, patients who refuse life-saving treatments would be required to speak with a behavioral expert, but until that becomes an option, clinicians will have to struggle with this ethical issue to the best of their abilities, ascertaining their patients’ decision-making capacity and making clear the ramifications of the decision.

To the best of our knowledge, our case report is the first in the published literature of a ruptured renal AML resulting in Page kidney associated with uremia. CT scan is the best modality for visualizing AML, any associated rupture, and renal infarction from progressive cystic growth, the latter of which is common in persons with chronic kidney disease. Any patient presenting with uncontrolled hypertension and renal cystic disease or with renal AML with chronic kidney disease with or without hematuria should be evaluated for ruptured AML causing Page kidney. An individualized approach to patient care and adequate patient education play a significant role in the management of end-stage kidney disease. If ethical issues arise when discussing therapeutic interventions with a patient, his or her decision-making capacity needs to be assessed and the decision documented and respected upon providing him or her with the necessary education on the ramifications of that decision.