A 16-year-old boy presented to a dermatology clinic with a 2-year history of brown, hyperpigmented, reticulated patches, which had begun on his chest and upper back and had gradually spread to his face and neck (Figures 1 and 2). The patient denied any associated pruritus or pain. He also denied any factors that had exacerbated or relieved the condition, and he had not used any topical or oral treatments. 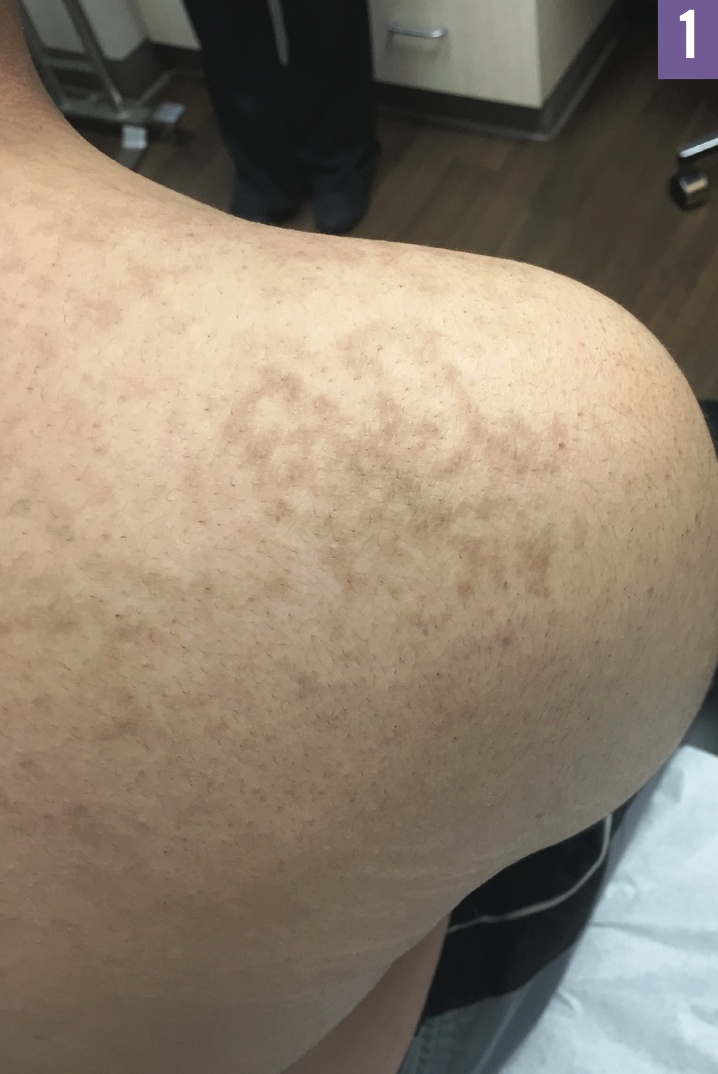 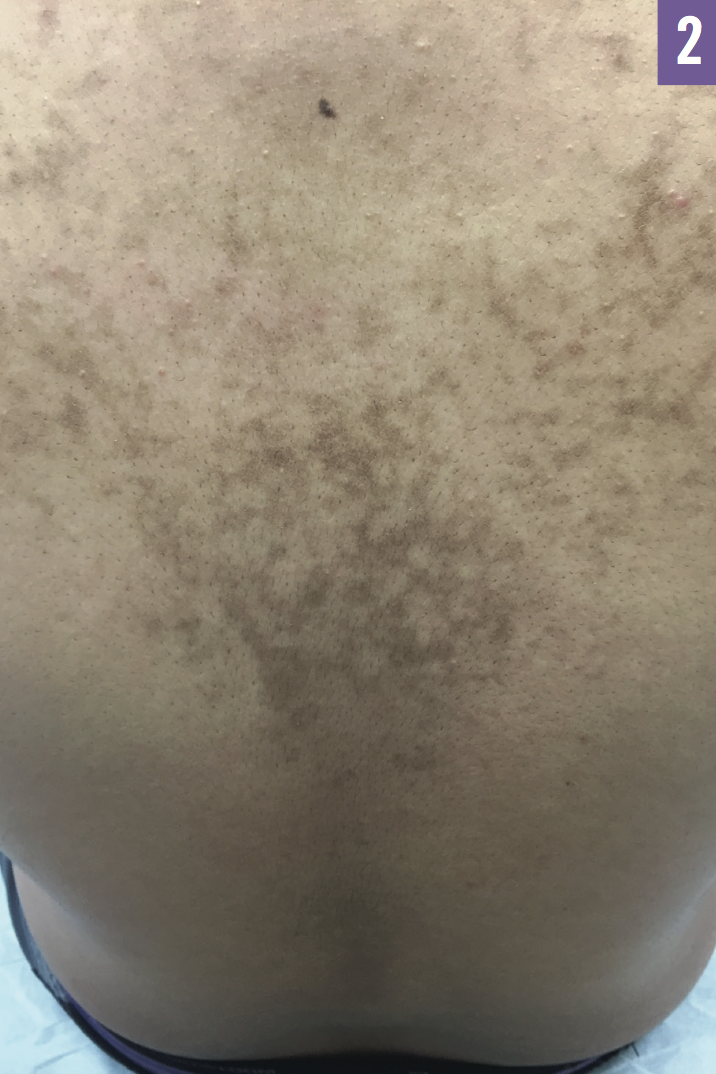 The patient’s past medical history included asthma and hypercholesterolemia, and he was not taking any medications. He had no family history of a similar eruption. The findings on examination of the skin were consistent with confluent and reticulated papillomatosis (CARP). A potassium hydroxide (KOH) preparation test was not conducted.

Discussion. CARP predominantly affects young adults and typically involves the upper back, chest, neck, axillae, face, and flexural areas. This rare dermatosis is characterized by coalescing, hyperpigmented, brown-gray macules that form a reticular pattern peripherally and may be velvety or scaly. Although it is uncommon, some patients may experience pruritis.1,2 CARP is a benign skin condition, but cosmetic concerns lead persons with it to seek treatment.

Among the differential diagnoses are tinea versicolor, acanthosis nigricans, and erythema dyschromicum perstans (EDP). To differentiate CARP, KOH prep testing of skin scrapings can be used to identify Malassezia yeast species in tinea versicolor, while the periphery of acanthosis nigricans lacks the reticulated pattern seen in CARP.3 A characteristic thin, nonscaly, palpable, cordlike border is a diagnostic feature of EDP.4

The pathogenesis of CARP has been attributed to disordered keratinization, but the etiology remains unclear.5 The most favored theory is a bacterial cause, which is supported by the condition’s excellent response to antibiotics.2 The identification of a proposed new species of Dietzia bacteria, D papillomatosis, described by Jones and colleagues6 in 2008, is a recent development in the search to identify a pathogenic cause of CARP. Other suggested causes include endocrinopathies and exposure to UV radiation.5

A genetic component may be involved, given that many familial cases of CARP have been reported. Enhanced keratin 16 expression was described in 2 siblings who presented with CARP.7 In another report, 3 siblings presented within 6 months of each other with the condition.8 Two of the 3 siblings also had tinea versicolor in association with their CARP, which lends some support to a previous etiologic theory that CARP is an inappropriate inflammatory response to Malassezia while also offering some evidence of genetic predisposition.8

The preferred first-line treatment is oral minocycline, 50 to 100 mg twice daily. For patients who cannot tolerate minocycline, treatment with azithromycin, 250 to 500 mg 3 times weekly, has been well-supported in the literature and offers fewer adverse effects. Other macrolides (erythromycin and clarithromycin) also have been reported to be effective. Topical treatments with retinoids, vitamin D analogues, and antifungals have shown inconsistent results. Case reports suggest that doxycycline, amoxicillin, cefdinir, and fusidic acid may be effective.3,10

Outcome of the case. The patient was started on oral minocycline; however, a day later, he developed an allergic reaction including stomach pain and a full-body rash, prompting immediate discontinuation. He then was started on topical mupirocin ointment. There was only mild improvement of the patient’s rash at a 3-month follow-up appointment. He was started on a 30-day regimen of oral ampicillin, two 250-mg capsules twice daily, in addition to daily washing of the affected areas with ketoconazole shampoo, 2%. Ampicillin was chosen considering the contraindication of tetracyclines related to the patient’s allergy, the patient’s insurance coverage, and evidence of successful treatment with amoxicillin in published case reports.

At a follow-up visit 2 months later, the patient reported poor adherence with the ketoconazole shampoo, having used it only a few times on his chest, but he reported having completed the full 30-day ampicillin course. His rash had resolved (Figure 3). Given the resolution of the condition in all affected areas, we concluded that ampicillin was likely responsible, given that the antifungal shampoo was not used on all affected areas. 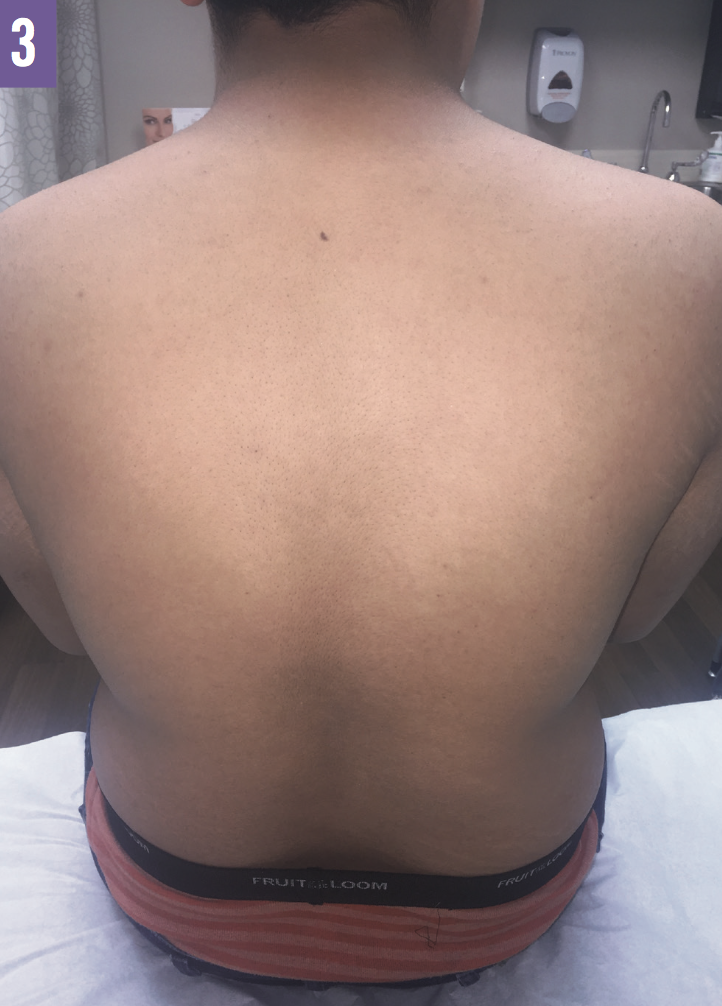