Amiodarone is a class III antiarrhythmic, but has a broad-spectrum of antiarrhythmic action exhibiting characteristics of all 4 Vaughn Williams classes.1 Amiodarone is widely used in atrial fibrillation for conversion and maintenance of normal sinus rhythm as well as rate control.2-4 In the 2010 American Heart Association Guidelines for Cardiopulmonary Resuscitation and Emergency Cardiovascular Care, amiodarone is the antiarrhythmic of choice for ventricular arrhythmias, refractory ventricular fibrillation/pulseless ventricular tachycardia, when patient is unresponsive to CPR, defibrillation, and vasopressor therapy.4,5 The average elimination half-life is 26 to 107 days for amiodarone and approximately 61 days for the active metabolite, N-desethylamiodarone.6

Furthermore, amiodarone has several highly significant drug interactions, including high-risk medications such as warfarin and digoxin.6 The purpose of this brief summary is to focus attention on amiodarone-induced lung disease so that clinicians will be vigilant in monitoring for this serious and potentially fatal adverse drug reaction.

Pulmonary toxicity is an example of a well-documented, serious, long-term toxicity from amiodarone therapy. Amiodarone pneumonitis was first documented in 1980 and pulmonary toxicity to this agent has continued to be reported for over 3 decades, clearly showing that this serious adverse drug effect still remains a problem.8-10 In fact, the reports of this effect are so numerous that citing all of them is beyond the scope of this column.

The estimated incidence of pulmonary toxicity ranges from 5% to 10%, with mortality seen in up to 10% of patients who develop this adverse effect.1,11,12 Pulmonary toxicity from amiodarone was first reported with higher daily doses of more than 400 mg daily (Table 1).9,11,13-15 However, subsequent cases have been reported in patients who received 200 mg daily or less for an average of 2 years.16-18 Pulmonary toxicity is not usually observed clinically until several months after treatment begins and rarely reported early in treatment.11,19 Risk factors associated with pulmonary toxicity include preexisting lung disease, advanced age, duration of therapy, and dose of amiodarone (Table 2).9,11,14,15,18 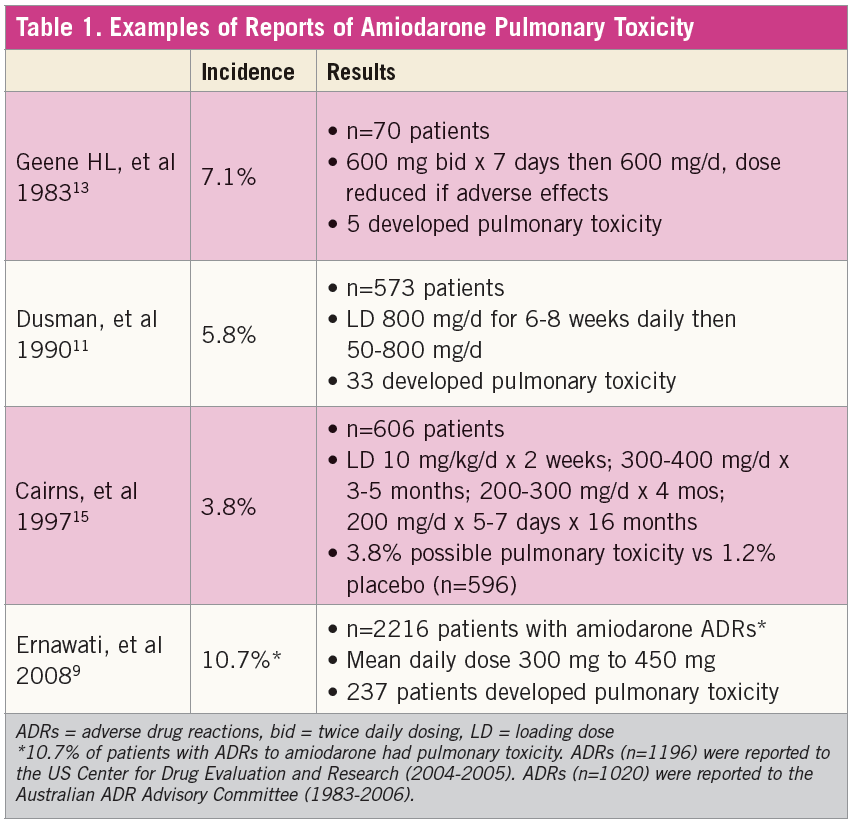 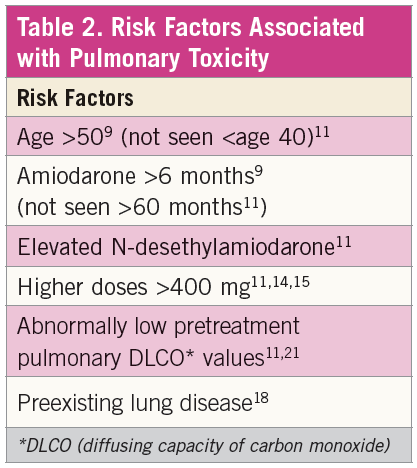 Pulmonary function tests, including DLCO, are recommended at baseline and for unexplained cough or dyspnea anytime during therapy—especially in patients with underlying lung disease, suggestive chest x-ray abnormalities, and clinical suspicion of pulmonary toxicity. Patients should be educated to immediately report unexplained cough or dyspnea.18 When pulmonary toxicity is suspected, the management first involves discontinuing amiodarone.18,21,24

Despite the lack of controlled trials, the use of systemic corticosteroids may be initiated in severe cases. The reported cases of corticosteroid use have used varying agents and durations of therapy.18,21,24,25 In 1 report, corticosteroids were withdrawn from a patient and upon re-initiation the patient failed to respond to therapy.19 The use of ACE inhibitors and ARBs may reduce the occurrence of pulmonary toxicity in patients who have chronic heart failure and have elevated angiotensin II levels.21  Nonetheless, amiodarone-induced lung disease can progress to pulmonary fibrosis and lead to death in certain cases.22

Amiodarone is associated with numerous adverse effects and it is essential to be mindful of these serious risks when prescribing this medication. Pulmonary toxicity is frequently seen after several months of therapy but may be seen very early in treatment. Risk factors for the development of pulmonary toxicity include preexisting lung disease, advanced age, longer duration of therapy, and the use of higher doses. For the management of pulmonary toxicity, literature supports discontinuing amiodarone immediately. Some benefits may be seen with the addition of systemic corticosteroids, but such treatment is not established and further study is needed. ■