ABSTRACT: Allergic rhinitis is a common condition in children that greatly affects quality of life and has high costs related to treatment. All patients with allergic rhinitis present with a constellation of symptoms, including rhinorrhea, nasal congestion, itchy eyes and/or nose, postnasal drip, and sneezing. The characteristic finding on examination is pale, boggy nasal mucosa or swelling of the turbinates. Physical signs of allergic rhinitis may include the allergic salute, Dennie-Morgan lines, and dental malocclusion. In children younger than 2 years, testing for IgE against foods (such as milk) is more useful than testing for indoor allergens (eg, house dust mites, cockroaches, and animal dander). Testing for foods and indoor allergens may be useful in children aged 2 to 6 years. For children older than 6 years, testing for both indoor and outdoor allergens is indicated.

The morbidity of allergic rhinitis can be substantial, considering that half of affected patients experience symptoms for more than 4 months each year, and 20% are symptomatic for at least 9 months of the year.6 In addition to the constellation of symptoms related to nasal inflammation, allergic rhinitis is often accompanied by conjunctivitis, loss of olfaction or taste, and sleep apnea. There is also an increased frequency of asthma and of otitis media and sinusitis, from obstruction of the eustachian tube and sinus ostia, respectively.6

This 2-part series will focus on the diagnosis and management of allergic rhinitis. Here I discuss issues related to diagnosis, including the risk factors, characteristic examination findings, causes, and allergy testing. In a coming issue, I will review the treatment approach.

Parental and neonatal risk factors are important for the development of allergy at a young age. In a birth cohort of 1037 New Zealand children who were followed for 18 years, male sex was found to be a significant independent predictor of atopy, airway hyper-responsiveness, hay fever, and asthma.7 A family history, especially maternal, of respiratory allergy strongly predicted allergic disease, and maternal smoking in the last trimester correlated with early onset of asthma. Birth in winter increased the risk of sensitization to cats, and birth in the fall and winter increased the risk of sensitization to house dust mites.7

ENVIRONMENTS WITH LOWER RISK OF ALLERGY

A study of adults (25 to 75 years of age) from rural and urban areas in Germany concluded that unknown protective factors might be responsible for the decreased prevalence of allergies among those who lived in a farming or rural environment.12 Another study of randomly selected adults participating in the European Community Respiratory Health Survey found that those who lived on a farm as a child were less frequently sensitized to cat and Timothy grass pollen and were at lower risk for nasal symptoms in the presence of pollen.13 A study conducted in Switzerland found that the prevalence of asthma, hay fever, and allergic sensitization was lowest among Amish children.14 These findings confirm that environmental factors encountered in childhood may have a life-long protective effect against the development of allergy and asthma.

The decreased frequency of allergy and asthma among farmers’ children compared with non-farmers’ children is so dramatic that a “hygiene hypothesis” has been entertained.15 This proposes that a shift to a TH1 response away from a TH2 response, which favors the development of allergy, results in a lower incidence of respiratory allergy, including allergic rhinitis, in children exposed to a farming environment.

Allergic rhinitis is provoked largely by either seasonal or perennial airborne allergens. As an IgE-mediated disease, allergic rhinitis manifests a biphasic response to seasonal allergens and perennial allergens. The early-phase response usually occurs within minutes of exposure to aeroallergens, beginning with sneezing followed by increased nasal secretion.6,17,18 One experimental study showed that mucosal swelling causes reduced air flow after 5 minutes; the acute symptoms abate within 1 hour.18 The recurrence of symptoms 4 to 8 hours later is considered the late-phase response.

Continued exposure to allergens can lead to chronic inflammatory changes in the nasal mucosa and produce a more profound effect than the acute nasal symptoms. The consequence is hyperirritability of the turbinate, which is characterized by increased sensitivity to all allergens and irritants. The end result is that even smaller amounts of allergen are sufficient to provoke significant symptoms.

The chemical mediators important for allergic symptoms include histamine, leukotrienes, prostaglandins, tryptase, and kinins.18 These jointly cause symptoms of nasal congestion secondary to the mucosal permeability, vasodilatation, and edema. Rhinorrhea, itchy eyes, itchy nose, and sneezing that result from disturbance of autonomic nervous control may lead to cholinergic dominance.17-19 In the late-phase reaction, within 3 hours of an allergen challenge, there is a rich infiltration of eosinophils, neutrophils, basophils, and T-helper cells. The T-helper cells are a source of cytokines that amplify and regulate the local immune response.19

Understanding the pathophysiology of allergic inflammation will help clinicians make the correct diagnosis and recommend effective therapy for children with allergic rhinitis.

All patients with allergic rhinitis, regardless of age, present with a constellation of symptoms, including rhinorrhea, nasal congestion, itchy eyes and/or nose, postnasal drip, and sneezing. Because of the smaller anatomic structures in children, nasal congestion, mouth breathing, and snoring are very common symptoms. Many children with allergic rhinitis also experience headache, fatigue, cognitive impairment, and sleep disturbance.19

The mean age at onset of allergic rhinitis in childhood is 10 years, and its incidence peaks between ages 13 and 19 years.20 However, evidence indicates that the onset could be much earlier, especially for those children who are allergic to common foods, such as milk.21 Symptoms tend to worsen during the first 2 or 3 seasons. After that time, the severity of disease usually stabilizes and then generally decreases in middle age. In about 20% of cases, symptoms disappear during childhood.22

Diagnosing allergic rhinitis in children presents unique challenges. Because children often are unable to verbalize their symptoms, the disorder frequently remains undiagnosed and untreated.23 This can increase the potential for the development of various sequelae that can detract from the child’s quality of life. It is, therefore, important to exercise patience and take the time to obtain a thorough history from parents.

Age at onset, chronological variations in symptoms, nature of symptoms, environmental exposures, and medications used and the response to the treatment all help focus on the basic issue of respiratory allergy. Family history of allergy and association of other allergic symptoms, such as asthma, food allergy, and atopic dermatitis (eczema), help determine the susceptibility and extent of allergic disorders. In young children, especially those younger than 3 years, it is important to recognize the possible association between rhinitis symptoms and food ingestion.24

Parents should be asked whether the child has any systemic symptoms, such as weakness, fatigue, irritability, poor appetite, and poor quality of sleep. Children may have difficulty in falling asleep because of sneezing, runny nose, and congestion, or they may have shallow sleep as a result of snoring or mouth breathing. School children may complain of short attention span or sleepiness in the classroom from lack of sleep or side effects of medications. Children with allergies are also more likely to experience deleterious effects on school performance than children without allergies.25 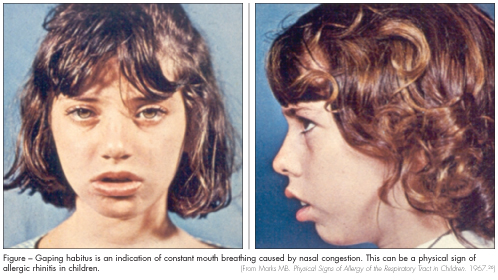 On examination, the characteristic finding of allergic rhinitis is a pale, boggy nasal mucosa or swelling of the turbinates. If a patient has been treated with corticosteroid nasal spray, the nasal mucosa may be hyperemic. The nasal discharge is usually clear. However, in a patient with ongoing rhinitis, the nasal discharge may become mucoid or thickened, which represents the progression of allergic inflammation.

Clinicians should be able to recognize the physical signs of allergic rhinitis, such as the allergic salute and Dennie-Morgan lines (Table). A common indication of constant mouth breathing caused by nasal congestion is a gaping habitus (Figure). Allergic rhinitis may have a unique effect on the dental and craniofacial structures in children that is not seen in adults.26

Bacterial rhinitis is usually preceded by viral infection. In the child with allergic rhinitis, the allergic mucosal surface enhances bacterial colonization that can lead to infection.27 Bacterial rhinosinusitis is more prevalent in winter than in the allergy seasons of spring, summer, and fall. A child is often treated for bacterial rhinosinusitis when a viral infection lasts longer than 10 days and when there is copious purulent nasal discharge or a positive imaging study. Nasal culture to identify the bacteria is usually not obtained.

CAUSES OF NASAL ALLERGY BY AGE

Younger than 2 years. Because young children spend much of their early life indoors and eat various foods for the first time, in those who have symptoms of allergic rhinitis before age 2 years, investigation for potential causes is directed at foods or indoor aeroallergens. Among young children with allergic rhinitis caused by food sensitivity, milk is the most documented cause, although other foods, such as egg, peanut, soy, and wheat, have also been reported.21

Older than 6 years. For children older than 6 years, with increasing outdoor activity, both perennial and seasonal airborne allergens should be considered as possible causes of allergic rhinitis. Seasonal allergens vary with geography and temperate climate; however, the most common are tree, grass, and weed pollens. In general, tree pollens produce symptoms in the spring, grass pollens trigger rhinitis in early summer, and weed pollens (including ragweed) are problematic in late summer.

In order to establish the link between allergens and allergic rhinitis, it may be useful to assess IgE against environmental factors or foods. This can be done either by ordering a radioallergosorbent test for circulating IgE or by referring the child to a specialist for skin testing to detect tissue-bound IgE:

•For children between the ages of 2 and 6 years, testing for foods and indoor allergens is useful.

•For children older than 6 years, testing for both indoor and outdoor allergens (seasonal pollens of trees, grasses and weeds) would be indicated, while testing for foods is optional.29

Nasal cytology to assess infiltration of cells can be helpful for the diagnosis of allergic rhinitis; however, nasal allergy challenge in children is reserved for research purposes. The levels of nasal eosinophils and basophilic cells (basophil leukocytes and mast cells) correlate significantly with each other in children between ages 4 months and 7 years; high levels of both suggest aeroallergen sensitization.19