ABSTRACT: The broad category of diaper dermatitis encompasses a variety of skin conditions and is one of the most common cutaneous disorders of infancy. The key management and prevention strategies for allergic contact diaper dermatitis are identification and avoidance of causative allergens. Fragrance-free personal care products and diapers, dye-free diapers, and cloth (white cotton) diapers are potential alternatives. This article explores the most common allergens and allergic diaper dermatitis presentations, as well as clinical tips for diagnosis and treatment.

Allergic contact dermatitis (ACD) is an important disease that affects 14.5 million Americans each year.1 The economic impact of this condition is high not only as a result of patient morbidity, but also because of loss of income, time away from school or work, and significant expenditures for health care visits and for medical therapies.1

After patch testing has been performed and a culprit has been identified, education becomes the critical intervention to ensure adherence to an allergen-avoidance regimen that can lead to remission of the dermatitis. If patients are unable to adhere to an avoidance regimen, they become at risk for recurrent or sustained dermatitis or progression to a systematized presentation.2,3 In fact, patient education often begins before a diagnostic patch test is ever placed to ensure that the patient or parents understand potential outcomes and their central role in disease management.

At the initial consultation, patients and/or their parents often are taught about the pathophysiology of ACD: its delayed presentation, its relationship with the immune system (sensitization to a chemical, and then elicitation of dermatitis with re-exposure), that it can occur at any time, and that it can be triggered by something the person has been using regularly either for a short time or intermittently for years.

In certain cases, other topics may be explained, such as irritant contact dermatitis (ICD) and contact urticaria, since history (not patch testing) can point to these as the patient’s diagnosis. It is important to note that ICD, which is the most prevalent form of contact dermatitis, can at times precede ACD or occur concomitantly with ACD.4,5 Unlike ACD, ICD occurs secondary to contact with an irritating or abrasive substance. Contact urticaria (wheal and flare reaction), on the other hand, represents the least prevalent form of contract dermatitis. It is an immune-mediated phenomenon whose hallmark is an immunoglobulin E– and mast cell–mediated immediate-type hypersensitivity reaction. This form of hypersensitivity is associated with potentially severe anaphylactic-type reactions.6-8

The Importance of History

Diaper dermatitis is a very broad term that encompasses a variety of skin conditions. It is one of the most common cutaneous disorders of infancy. The overall incidence is between 7% and 35%, with a peak at 9 to 12 months of age.9 An infant’s anatomy can be a predisposing risk factor in itself, because the many folds and creases constitute areas of difficulty for cleansing and contribute to a moist environment.10 A thorough patient history is a key component in making the proper diagnosis.11

The physical construction of the diapers used is a vital element in the patient’s exposure history (eg, disposable versus cloth, dye versus dye-free). For instance, disposable diapers might have the advantage of preventing irritant diaper dermatitis by reducing wetness via an absorbent gel, whereas cloth diapers might not be as effective at wicking away moisture.10,12 That being said, white cotton cloth diapers in particular have the advantage of reducing exposure to potential allergens such as dyes and fragrances.

While in-depth discussion of the differential diagnoses is beyond the scope of this article, they are important to consider, because diaper dermatitis can be multifactorial (Table 1). For example, a history of exposure to high humidity and heat (eg, warm weather), the infant being overdressed, or recent antibiotic use can contribute to intertriginous candidiasis. 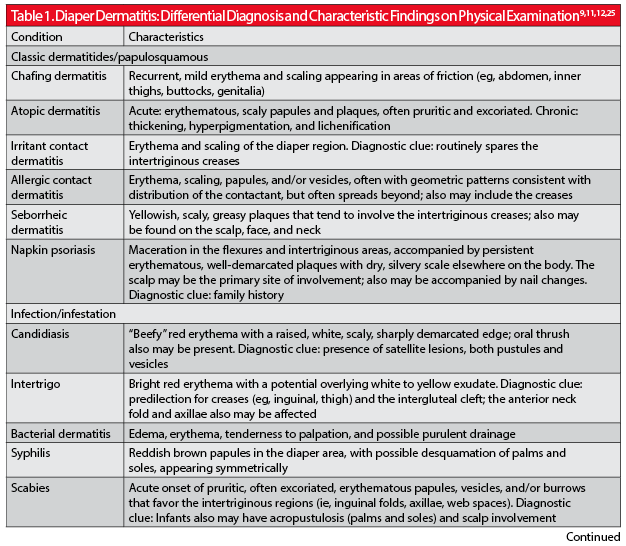 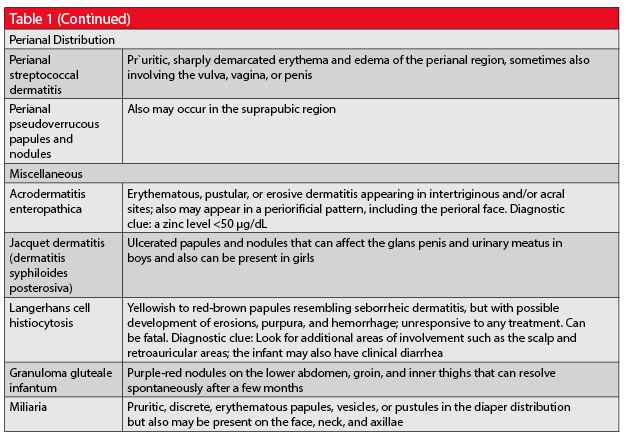 When taking the patient’s history, it is important to elicit whether there has been painful or difficult urination, a possible indication of Jacquet dermatitis, which presents with punched-out erosions of the diaper region. Likewise, a history of Hirschsprung disease, encopresis, or urinary incontinence can be associated with perianal pseudoverrucous papules and nodules and/or granuloma gluteale infantum.13

Diarrhea can be a trigger for the development of diaper dermatitis, since the skin’s pH is elevated due to the formation of ammonia, which is produced when feces are exposed to ureases in urine. Proteases and lipases within the feces then are activated, which can damage the stratum corneum. Moreover, the moist environment contributes to maceration.9,10 In addition, diarrhea with failure to thrive and alopecia could indicate a nutritional dermatosis such as acrodermatitis enteropathica. When considering the differential diagnosis, Langerhans cell histiocytosis should be considered if lymphadenopathy, anemia, and hepatosplenomegaly are present. This article focuses specifically on ACD in the diaper region.

Patch testing is the gold standard for the diagnosis of ACD, with positive reactions graded from macular erythema to either 1+, 2+, or 3+ intensity, indicated by erythema, induration, papules, or vesicles at the site of the patch test application.11

A patch test device that is approved (in adults) by the U.S. Food and Drug Administration and contains some of the allergens frequently associated with diaper dermatitis is commercially available (the Thin-layer Rapid Use Epicutaneous [TRUE] Test, from SmartPractice Denmark); however, comprehensive extended-panel and product-patch testing may be needed to determine the culprit. Products to be tested include the diaper along with any creams and powders that have been used in the affected region.11

Understanding the potential causes or predisposing factors leading to diaper dermatitis is key to prevention and treatment. ACD is a delayed type 4 hypersensitivity immunologic reaction that is the second most common form of contact dermatitis after ICD.4

Sensitization to a number of chemical allergens in diapers and other products used in the diaper area has been reported (Table 2). For example, disperse dyes—specifically red 1 and 17, blue 106 and 124, and orange 3—have been reported to elicit dermatitis in this setting.14,15 Disperse dyes are used on synthetic fabrics and therefore easily leach onto the skin in the presence of moisture and friction. Fragrances found in diapers and in topical products used to treat and prevent diaper dermatitis, such as fragrance mix 1 and balsam of Peru, also have been associated with ACD.16,17 Moreover, reactions have been noted to the emulsifier sorbitan sesquioleate, which is included in many topical creams and some ointments, including medicaments.11,18 Preservatives also have been implicated in diaper region ACD, specifically iodopropynyl butylcarbamate and bronopol, which along with fragrances are used in baby wipes.11,19

Interestingly, ACD caused by rubber additives—accelerators, such as mercaptobenzothiazole, found in the elastic at the waist and legs of disposable diapers, and p-tert-butylphenol formaldehyde, a resin used in diaper adhesives—has been termed “Lucky Luke” dermatitis in the late 1990s.11,20,21 This name is based on the characteristic distribution of the dermatitis on the infant or child’s hips and outer buttocks, which resembles a cowboy’s holster.

The most important management strategy for ACD-associated diaper dermatitis is identification of causative allergens and subsequent prevention by avoidance.11 Fragrance-free personal care products and diapers, dye-free diapers, and cloth (white cotton) diapers are potential alternative options. Cloth diapers can pose a challenge, however, since disposable diapers have the advantage of superior absorption and prevention of ICD and/or candidiasis; therefore, frequent diaper changes are encouraged to help prevent chafing and ICD. Some diapers also contain petrolatum to prevent ICD, while others are designated “chlorine-free” to suggest a safer product.10 Scientific evidence of the effect of chlorine inclusion (in diapers) on microbial growth on the skin to our knowledge is not available. Furthermore, a review of the literature demonstrated no published head-to-head trials showing an association between chlorine inclusion and increased prevalence of diaper ICD.

While the preservatives and fragrances in disposable baby wipes also have been implicated in ACD, these products have advantages over washcloths, both hygienically and mechanically, in that the cloths may contribute to irritation, especially in compromised skin.10 Some disposable wipes are formulated with a pH buffering system to allow for maintenance of skin’s normal physiologic pH after cleansing.10 Despite these benefits, in the infant with sensitization to fragrances, additives (eg, chamomile, aloe, panthenol)10 or preservatives (eg, bronopol, iodopropyl carbamate, sodium hydroxymethylglycinate, quaternium-15), extreme caution must be used when selecting wipes, and complete avoidance may be necessary. In fact, many health care providers recommend that soap and water be used in the home and wipes used only when such washing is not easily performed.

In addition to avoidance strategies, which may be challenging, the application of topical barriers is vital at each diaper change, preferably when dermatitis is at bay and even more so when it is present. Recommended “protectant” salves include those containing zinc oxide, beeswax, mineral oil, dimethicone, and petrolatum, as well as ointments containing vitamins A and D.9,10,22 In addition to topical barriers, preparations formulated to restore epidermal barrier function using ingredients such as lanolin (which may cause sensitization in some children), ceramides, and cod liver oil are available.

Additional topical treatments include low-potency, nonfluorinated corticosteroids, such as 1% hydrocortisone, applied 2 to 3 times per day, usually for no longer than 2 weeks, but this depends on the health care provider’s evaluation. Moreover, a health care provider may choose to prescribe a short course of mid-potency corticosteroids for severe involvement, but caution is advised, because the occlusion of the affected area by the diaper could cause increased absorption and potentially predispose to yeast overgrowth. Potential risks of topical corticosteroid use in the diaper area include cutaneous atrophy, striae, telangiectasia, and changes in pigmentation.14 In order to avoid these concerns, corticosteroid-sparing agents such as calcineurin inhibitors (ie, tacrolimus or pimecrolimus) can be prescribed.18

A person might be exposed to and subsequently sensitized to a particular allergen for days to years before developing ACD. Exposures can be additive, eventually causing the immune system to cross a figurative threshold, at which time a cutaneous response is elicited.4,23 Just as it required contact with many items over time to produce a response, it will then require avoidance of several exposures over time to induce remission. Avoidance creativity, however, is necessary by using alternatives such as cloth, “plant-based,” or “natural” conventional-type diapers (Table 3).

Many personal care products used on infants and young children contain potential allergens such as fragrances and preservatives. Because searching for these chemicals on a product’s ingredient list can be tedious, programs are available to help. The Contact Allergen Management Program (CAMP), a service offered by the American Contact Dermatitis Society,24 and the Contact Allergen Replacement Database (CARD), based on research licensed from the Mayo Clinic,25 allow a provider to enter a patient’s known contact allergens and produce a “shopping list” of products devoid of those chemicals. The technology also can exclude cross-reactors to help avoid inadvertent exposure to a harmful substance. While baby wipes are included in these databases, diapers are not at this time. 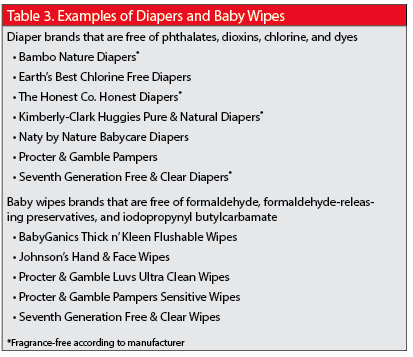 Dr Herro is a dermatology resident at the University of Texas Health Science Center in San Antonio. Dr Jacob is an associate clinical professor in the division of dermatology at the University of California, San Diego and Rady Children’s Hospital–San Diego. Dr Jacob discloses that she is an investigator for the manufacturer-sponsored safety and efficacy trial of the SmartPractice Thin-layer Rapid Use Epicutaneous (TRUE) Test in children and adolescents.