An Adolescent With a Smooth, Blue-Black Nodule on the Dorsal Wrist

A 17-year-old male presented with a smooth surfaced, bluish nodule on the dorsal aspect of the left wrist. The lesion had been first noted 4 to 5 years ago, and it had increased minimally in size with time. The lesion was asymptomatic, and the patient was otherwise in good health. There is no family history of skin cancer. He used tanning salons on occasion. 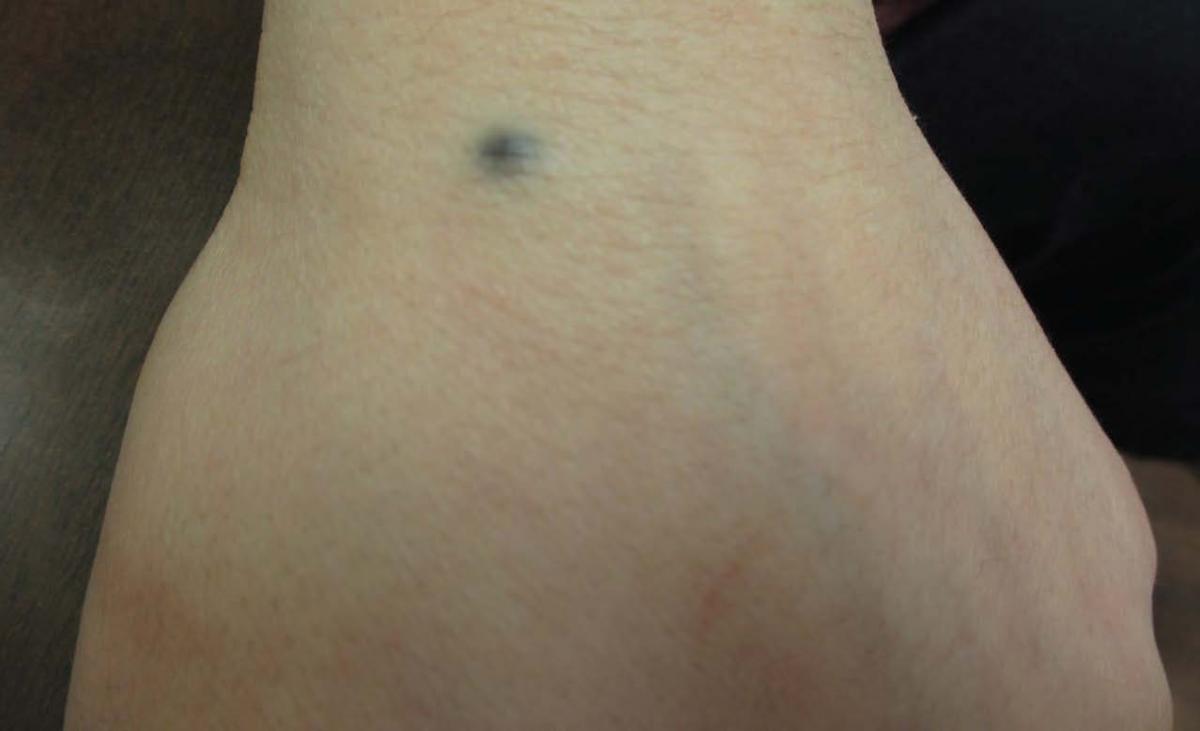 Blue nevi are benign neoplasms composed of dermal melanocytes presenting as papules, nodules, or, rarely, plaques of blue, blue-gray, or blue-black color. Histologically, the lesion is characterized by a proliferation of spindled and dendritic melanocytes in a focal area of the reticular dermis. There are a number of variants, with the two main ones being common blue nevus (also known as dendritic blue nevus) and cellular blue nevus. 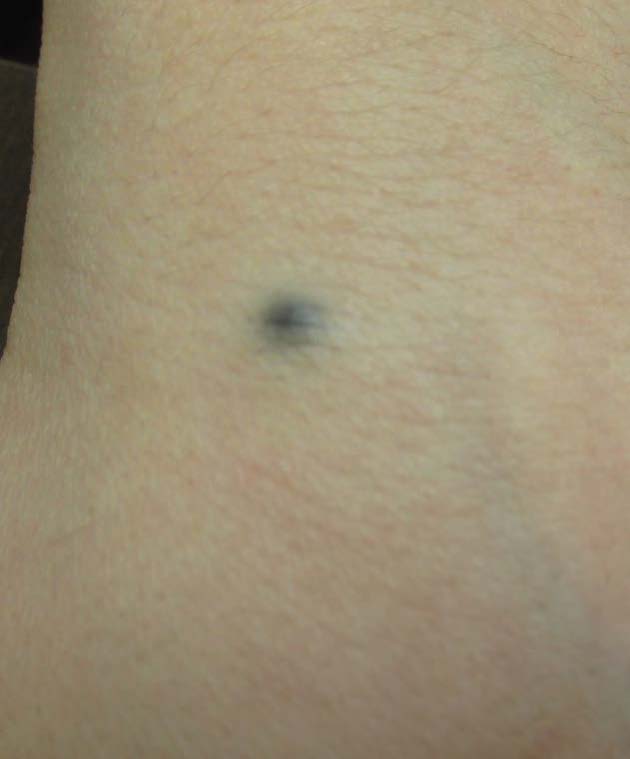 The common blue nevus typically presents as a solitary, smooth, well-demarcated, dome-shaped papule or nodule that measures less than 1 cm in diameter,1,2 as illustrated in the present case. The lesion is homogeneously blue to blue-gray to blue-black in color and is asymptomatic.1,2 The characteristic blue color can be attributed to the deep dermal location of melanin, and that shorter-wavelength blue light cannot penetrate deeply and is reflected back to the observer (Tyndall effect).2 Sites of predilection include the face and the dorsal surfaces of the hands and feet. Rarely, blue nevi may occur in the subungual area, conjunctiva, oral mucosa, genital mucosa, sinonasal mucosa, orbit, esophagus, bronchus, lymph nodes, endometrium, uterine cervix, vagina, penis, and prostate.2,3

The cellular blue nevus is less common and is larger (typically 1 to 3 cm in diameter), is more elevated, often is more heavily pigmented, and has a more irregular surface. Sites of predilection include the scalp, lower back, and buttocks.

Rarely, blue nevi with peripheral satellitosis also have been described.4 A blue nevus with satellite lesions must be differentiated from a malignant melanoma.

The plaque-type variant is usually present at birth or develops in early childhood, and it may enlarge at puberty.3 The lesion usually is blue-gray and composed of a single plaque or a confluence of several small macules and/or papules.3 The scalp is the site of predilection.

Blue nevus occurs in 3% of Japanese and 0.5% to 4% of white adults.6 Common blue nevi frequently arise in adolescence. The sex ratio is approximately equal.

The cellular blue nevus may be congenital or acquired. The condition most commonly is first noted in adults younger than 40 years of age. The male to female ratio is approximately 1 to 2.2,3

Presumably, a blue nevus results from a dermal arrest in the migration of neural crest melanocytes during fetal development. This is supported by the fact that melanocytes in blue nevi typically stain positive for monoclonal antibody human melanoma black 45.5 The majority of blue nevi have a somatic mutation in GNAQ, the gene that encodes guanine nucleotide-binding protein, q polypeptide,subunit α.1 Blue nevi with mutations in KRAS also have been reported.1

Histologic examination of a blue nevus reveals groups of intensely pigmented, spindle-shaped and dendritic melanocytes in the dermis with an associated infiltrate of pigment-laden macrophages (melanophages).2 In addition to these findings, a cellular nevus also shows islands of large spindle-shaped cells in the dermis that may extend into the subcutaneous adipose tissue. Histologic examination of an epithelioid blue nevus shows a poorly circumscribed admixture of heavily pigmented epithelioid and spindled melanocytes.

The diagnosis is a clinical one and can be aided by dermoscopy. Dermoscopy typically shows a bluish or steel blue, well-circumscribed, homogeneous, structureless pigmentation secondary to the presence of heavily pigmented melanocytes in the dermis.7,8 No distinct blue dots, blue globules, pigment network, or vessels are readily visible.8

The nevus can be cosmetically unsightly and an esthetic concern if it occurs in an exposed area. Malignant transformation is rare but should be considered if there is a sudden increase in size of the lesion, deepening of color, or recurrence after the excision of the lesion.

Stable blue nevi require no intervention. Referral to a dermatologist or excisional biopsy should be considered if the diagnosis is in doubt or cosmetic removal requested.