Adolescent scoliosis often is identified as idiopathic scoliosis--the precise cause of the spinal curvature that occurs in early adolescence remains unknown. Providing effective nonoperative treatment may present a challenge. Patient compliance is a significant problem in both exercise therapy and bracing, and the current dogma suggesting that exercise treatment is of no benefit for patients with adolescent scoliosis has a foundation in earlier studies.

In this article, we describe the muscle function problems that may lead to scoliosis, the previous experience with exercise treatment, and current recommendations for the use of an exercise program in adolescents.

The incidence of adolescent scoliosis in the general population is about 1.5% but varies greatly, depending on location and the criteria applied. A curvature of 10 degrees is the generally accepted baseline for defining scoliosis.1

Genetic factors also come into play. For example, monozygous twins have a concordance rate of about 73% and dizygous twins a rate of 36%.2 Scoliosis occurs in 25% of the daughters of women who have a scoliotic curvature greater than 15 degrees. Eleven percent of patients' first-degree relatives are affected. All studies indicate that scoliosis is significantly more common in girls than in boys.

Some evidence suggests that those with adolescent scoliosis have very subtle neurological abnormalities. For example, various studies have shown evidence of deficient proprioception, such as abnormal sway, in persons who have scoliosis compared with normal persons.3 Others have suggested that abnormal vestibular function and abnormal motor control are present in the cortex in these patients.4 More subtle abnormalities have been identified but are not consistent throughout the scoliotic population and do predict which patients will have curve progression.

One observation consistent in all persons with scoliosis is asymmetry in muscle function. Histochemical and histological studies demonstrate differences in muscle status on the convex versus the concave side of the curve.5 In addition, asymmetrical myoelectric activity has been noted. In one study, hyperactivity seemed to occur on the convex side of thoracic curves and on the same side of lumbar curves.6

Real time ultrasonography has also shown asymmetry in muscle mass in patients with scoliosis. In one study, the lumbar multifidus muscles were larger on the opposite side of the thoracic convexity and on the concave side of thoracolumbar curves.7

Another study compared extensor strength in the sagittal plane in persons with and without scoliosis.8 Strength was tested isometrically and was found to be equal in the 2 groups.

No study has evaluated rotational strength or dynamic strength. However, it has been demonstrated that asymmetry in torso and upper extremity function can create scoliosis. In a Scandinavian study, a small thoracic curve occurred in 80% of elite adolescent athletes who used single-arm skills, such as javelin throwers and tennis players.9 In a similar study, 336 Junior Olympic swimmers were evaluated for scoliosis10; 16% had mild curves, all with a convexity on the dominant side of the body. Of course, studies such as these suggest that muscle imbalance is a possible cause of scoliosis.

One well-planned study took a clinical research approach to test the hypothesis that exercise alone can influence curvature progression.11 Matched groups of adolescents with scoliosis treated with exercise or no exercise were monitored for 1 year. The exercise program--a daily regimen of stretching and strengthening--was a home exercise program, but participants occasionally reported to the physical therapy center. No significant difference was found between the groups using radiographic examination.

However, only a few of the adolescents reported that they had performed the exercises daily, and nearly half reported doing them only occasionally. In adolescents, there is not much potential for adequate compliance with an exercise program, especially one that is mostly unsupervised.

Another study reported the use of exercises in conjunction with bracing.12 In this study, 24 girls with scoliosis were taught how to perform a 20- to 30-minute daily exercise regimen; however, only 12 of the participants complied with the instructions. Again, no difference was seen between those who had exercised and those who had not. In addition, brace treatment did not succeed in more than half the patients, regardless of whether they exercised.

No studies in the orthopedic and pediatric literature have described a specific rationale for exercise other than general range of motion and strengthening exercises. Again, gaining compliance with a daily program of calisthenics in young adolescents who have no pain is difficult--unless the calisthenics are performed in preparation for a sports activity--because the benefits of exercise for painless scoliosis are not readily identified.

Compliance also is a significant problem in bracing, the only other nonoperative care prescribed for patients with adolescent scoliosis. Self-image is a significant factor in 12- to 14-year-olds, especially girls, and torso bracing even with a form-fitting custom device certainly is difficult to hide. In addition, it has been clearly demonstrated that the longer that bracing can be carried out, the more likely it will succeed. However, one study showed that 35% to 40% of patients for whom bracing was prescribed were noncompliant.13

Bracing can be effective. In an extensive series of more than 1000 patients, bracing was found to stop significant progression in 78%, although some needed bracing for several years.14 However, other reports have indicated that bracing does not even change the natural history of progressive idiopathic scoliosis--perhaps because of lack of patient compliance.15

In 1999, in a summary of the then current state of affairs, Dickson and Weinstein16 indicated that, "despite the lack of data, treatment with a brace is still advocated." They noted that early detection was not helpful--bracing normally would not be started until the curvature had progressed to 30 degrees or more. Therefore, even though the adolescent with scoliosis and his or her parent were aware of the deformity, the treatment approach was only "watch and wait" for the lesser curvatures. Currently, there are no good predictors--other than earlier age and greater potential for growth--of which patients will have curve progression.

Justification for a Specific Exercise Program

When earlier authors studied exercise for scoliosis, none of the exercise programs were measured, compliance was not really monitored, and no baseline level of function was identified to be compared with the patient's status at the conclusion of treatment. One reason may be that there was no rationale of what to measure or how to measure improved muscle function with exercise. In addition, only with the use of exercise equipment can baseline and progress be quantified accurately.

Once exercise equipment became available, baseline could be defined by performing precise measurements of torso rotation and lumbar strengthening. With use of the equipment, physicians can identify the specific isometric strength at various points in the torso rotation range.

In our first study of 12 adolescent patients with scoliosis, all were weaker in rotation in one direction than in the other17--not the case in normal adolescents and adults, who have equal rotation strengths. However, this asymmetry was correctable with progressive resistance exercises on torso rotation equipment (Figure 1). 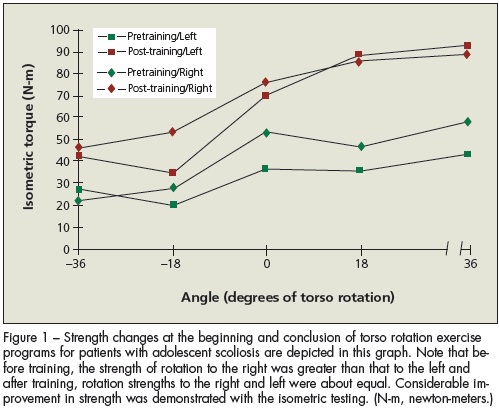 A less complex piece of equipment achieves torso rotation strengthening by stabilizing the pelvis and using progressive variable resistance. In our next study of 20 adolescent patients, the results were similar to those in our earlier study: no patients experienced worsening curvature and most improved somewhat.18

We combined this experience with that of a physiotherapist in New Zealand who was using the same equipment and the same protocols for 31 patients with adolescent scoliosis. The mean curvature was 29.5 degrees (range, 10 to 50 degrees) when treatment started and 25.1 degrees (minimum decrease, 4 degrees; and maximum decrease, 43 degrees) when it concluded. Treatment continued until patients' strength gain had reached a plateau. The mean curve change was a decrease of 4.4 degrees (maximum decrease, 20 degrees; and minimum decrease, 2 degrees). None of the patients worsened. The change in rotation strength was 108.5% (minimum, 35%; and maximum, 200%). A recent University of Kansas study showed similar results, lending confirmation to our experience.19,20

The patients in all the studies also exercised on a lumbar extension unit. The total time of exercise was about 15 minutes, and the patients exercised twice a week. Compliance was not a problem; all patients who started the treatment program continued to conclusion. Because many had been advised that they would need bracing, this alternative treatment seemed a reasonable option, but none of the patients in these studies used bracing.

Electromyographic surface analysis was carried out in an effort to gain more insight into the cause of the discrepancy in rotational strength. The results demonstrated initial inhibition of paraspinal musculature that corrected itself after the exercise program (Figure 2). 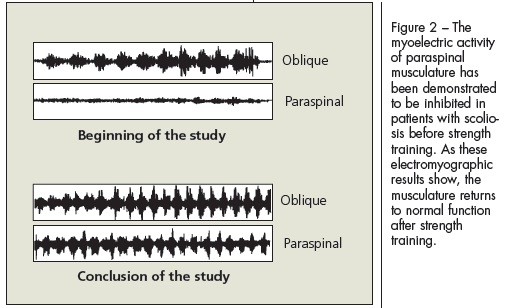 A recent study in Finland reinforced these observations.21 The results demonstrated significant differences in lumbar myoelectric activity during isometric strength testing and standing extension during sudden overexertion, especially in the lumbar muscles in a series of right thoracic curves. The authors noted that the differences were present, although no lumbar spine deformity was seen in some patients. This apparent discrepancy suggests that asymmetrical spinal muscle activation may not be caused by the curvature itself but may be more primary in the CNS.18

Clearly, however, the asymmetry of torso rotation strength is a consistent finding, one that also was confirmed by University of Kansas studies.20 This asymmetry is correctable by progressive resistance exercises for torso rotation and lumbar extension. Such strengthening is associated with control of scoliotic curves, if they are below the operative level (about 45 degrees).

Because even some decrease in the amount of curve may be expected, our experience indicates that this form of therapy is as beneficial as bracing. The exercises are safe and simple and may be started before the major step of using torso bracing is taken. They should be carried out in a measurable manner with the pelvis stabilized so that only the torso musculature is used.

In using the torso rotation equipment, we start with a resistance at about one fourth of body weight; the exercises are done in each direction with this resistance. Once 20 repetitions have been performed in each direction, the resistance is increased by about 5% and a new cycle is started. * 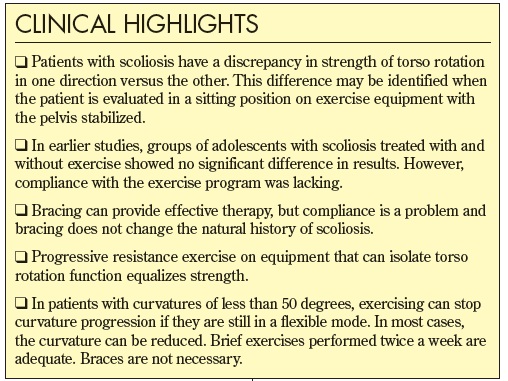