An Adolescent’s Exuberant Rash: Is It Hand-Foot-and-Mouth Disease?

An otherwise healthy 15-year-old white adolescent presented with a 5-day history of a rash that first had been noted on his hands and feet. The rash had spread centrally to the trunk and proximal extremities, followed by the scalp and oral mucosa. He reported having experienced a prodrome of fever, malaise, sore throat, and upper respiratory symptoms. On questioning, his mother reported that the patient had a history of hand-foot-and-mouth disease (HFMD) at age 5. 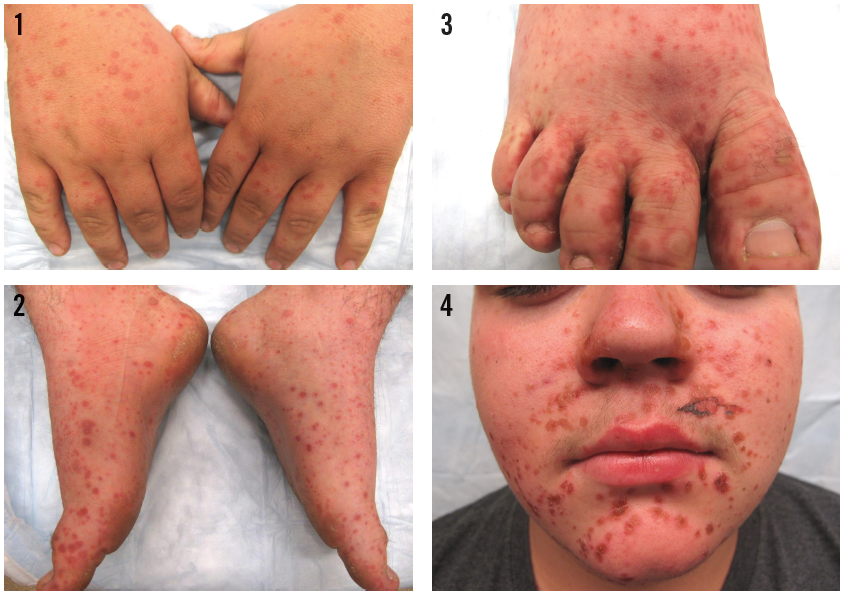 Does this teenager have HFMD or something else?

The rash of atypical HFMD is preceded by an acute febrile viral illness, and it presents as crusted, hemorrhagic papules and plaques on the face, particularly the perioral region, as well as erythematous papules and vesicles on the dorsal and volar aspects of the hands and feet that then may spread to the trunk and extremities.1

The rash’s crusted erosions on the face may resemble impetigo, while the papules and vesicles on the hands and feet may be targetoid, mimicking erythema multiforme. In individuals with atopic dermatitis, the rash may be more severe and show a predilection for areas of existing dermatitis, a condition called eczema coxsackium.2

This patient’s impressive presentation of atypical HFMD differs from “typical” HFMD, which is characterized by a fever, oral erosions, and a much milder eruption consisting of small vesicopapules that usually are limited to the palms and soles.

The diagnosis of atypical HFMD is clinical; however, the presence of coxsackievirus A6 can be confirmed with reverse-transcriptase polymerase chain reaction assay of vesicle swabs. Results of histopathology testing, which is nonspecific, may show areas of reticular ballooning of epidermis as well as perivascular inflammation and interface dermatitis.3

The differential diagnosis of atypical HFMD includes impetigo, erythema multiforme, and eczema herpeticum.4 Treatment is supportive, and the exanthem is self-limited. Skin changes resolve in 7 to 10 days with no residual scarring, and associated pruritus may be treated with oral antihistamines as needed.1

This case illustrates the exuberant clinical presentation of atypical HFMD, which most often is secondary to infection with coxsackievirus A6. Interestingly, the patient’s history of HFMD in childhood did not prevent the development of atypical HFMD in adolescence.

Krista N. Larson, BS, is a student at the University of Virginia School of Medicine in Charlottesville, Virginia.

Jessica M. Kwock, MD, is a resident in the Department of Dermatology at the University of Virginia School of Medicine.

Barbara B. Wilson, MD, is an associate professor and chair of the Department of Dermatology at the University of Virginia School of Medicine.