An Adolescent With Inguinal Swelling

A 15-year-old boy presented with a painful swelling in the left groin that had persisted for 2 weeks. He denied any fever, dysuria, or urethral discharge, and a review of systems was unremarkable. He had no significant past medical or family history, and he was not taking any medications. He did report having unprotected sexual activity with a female approximately 6 weeks prior to presentation, but his partner was asymptomatic. In the past 90 days, he did not travel internationally or have zoonotic exposure.

Upon presentation, he had a temperature of 36.4°C, a pulse of 70 beats/min, a respiration rate of 16 breaths/min, and blood pressure of 100/70 mm Hg.  The results of a physical examination revealed a well-developed individual in no apparent distress, but the examination results were significant for tender nodules above and below the left inguinal ligament without any ulcers (Figure). The patient’s scrotum was mildly erythematous. His urethra was normal in appearance, and there was no discharge. 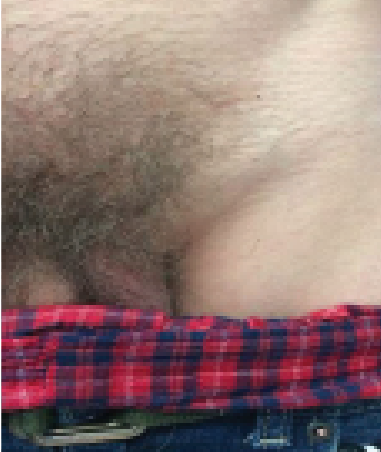 What caused the patient’s inguinal swelling?

(Answer and explanation are on the next page.)

Chlamydia is one of the most common sexually transmitted diseases in the United States, with nearly 1.5 million cases reported to Centers for Disease Control and Prevention in 2014. The majority of chlamydia infections occur in individuals who are 15 to 24 years of age.1

Infections are caused by Chlamydia trachomatis, an obligate, gram-negative, intracellular bacterium that has at least 18 serovars that are linked with various medical conditions. Serovars L1, L2, and L3 are associated with lymphogranuloma venereum,2 which is prevalent in tropical and subtropical regions but occurs rarely in the United States. Its peak incidence is seen in the second and third decade of life, and it is becoming more prevalent in men who have sex with men (MSM). Lymphogranuloma venereum may present as hemorrhagic proctocolitis, particularly among HIV-positive MSM.3,4

Chlamydia infection often is asymptomatic in females, but dysuria, frequency, mucopurulent discharge, and inguinal lymphadenopathy are common manifestations. In men, the infection begins as a small ulcerative papule, which heals without scarring in a few days. The inguinal syndrome begins 2 to 6 weeks following exposure and is characterized by painful unilateral inguinal lymphadenopathy.5 Elevated WBC count in anorectal smears may predict lymphogranuloma venereum. Histologically, infected nodes have small stellate abscesses surrounded by histiocytes.

In women, untreated chlamydia can spread into the uterus or Fallopian tubes and cause pelvic inflammatory disease, endometritis, dysmenorrhea and perihepatitis, or Fitz-Hugh-Curtis Syndrome. In men, chlamydia attaches to sperm, which decreases sperm motility and viability and can cause infertility. In addition, untreated chlamydia may increase the likelihood of HIV transmission.6

Lymphogranuloma venereum presents with an inguinal syndrome is characterized by painful inguinal lymphadenopathy starting 2-6 weeks after presumed exposure in heterosexuals and women.  A groove sign, an enlargement of lymph nodes above and below the inguinal ligament, aides in the diagnosis. LGV is confirmed by culture of rectum, urethra, or cervix and by nucleic acid amplification test for C trachomatis. After our patient was diagnosed as having lymphogranuloma venereum, he was initially treated with only 1 dose of 1000 mg of oral azithromycin. One week later, oral doxycycline 100 mg twice a day for 21 days was prescribed due to partial improvement. Three weeks later, the patient’s left inguinal lymphadenopathy had completely resolved.

Sandeep A. Gandhi, MD, FACP, FIDSA, is an infectious disease consultant at Peconic Bay Medical Center-Northwell Health in Riverhead, New York and a clinical associate professor of medicine at NYIT-NYCOM.

Mahmood Afghani, MD, is a hospitalist at Peconic Bay Medical Center-Northwell Health in Riverhead, New York and a clinical associate professor of medicine at NYIT-NYCOM.