An Adolescent With Cough, Congestion, and Back Pain: A Delayed Diagnosis of Hodgkin Lymphoma

A 17-year-old girl presented to a community hospital with a several-month history of cough and congestion and a 3-week history of severe upper back pain that had resulted in her missing school. She reported a past medical history of asthma but no prior hospitalizations or surgeries. She recently had been seen several times in the adult emergency department (ED) and had been treated symptomatically with opiates and nebulizer treatments. 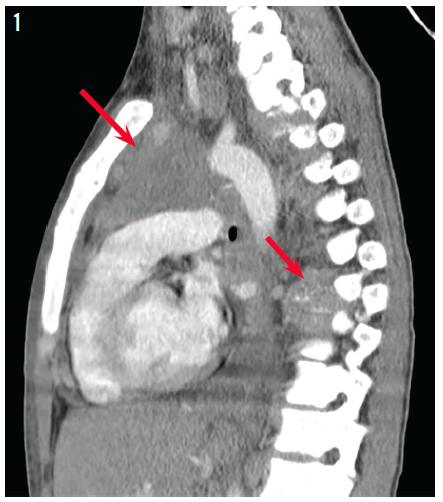 During the most recent ED visit, a chest radiograph revealed a left hemithorax opacification, and she was admitted to the community hospital’s pediatric intensive care unit (PICU). During this 6-day hospitalization, she was treated with intravenous piperacillin-tazobactam and vancomycin for presumed pneumonia. Despite this treatment, she experienced progressive clinical decline, requiring 12 L/min of oxygen and a blood transfusion after a hemoglobin test result of 7.1 g/dL.

On repeat chest radiograph, the pneumonia appeared to be present in the right lung, as well. Computed tomography (CT) of the chest revealed a worsening left lung infiltrate with right mediastinal shift and bilateral lung effusions. The patient then was transferred to the PICU at our children’s hospital for further management, including possible bronchoscopy or a video-assisted thoracic surgical procedure.

During evaluation of the patient, further review of symptoms was significant for a weight loss of greater than 10 pounds in 3 months, intermittent fevers, and night sweats.

On physical examination, the patient appeared ill and pale, with an oxygen saturation of 99% on 4 L/min of oxygen via nasal cannula. Her vital signs were otherwise within normal limits. Pertinent physical examination findings included left lung fields with minimal air movement and intermittent mild wheezing; poor air movement in the right lung upper fields with crackles at the right base; and tenderness to palpation of the posterior lower ribs bilaterally and of the mid to lower back. She had no palpable lymphadenopathy, cyanosis, rash, or organomegaly.

Laboratory test results revealed a white blood cell count of 22,300/µL, a hemoglobin level of 8.4 g/dL, a platelet count of 623 × 103/µL, and an erythrocyte sedimentation rate greater than 140 mm/h. 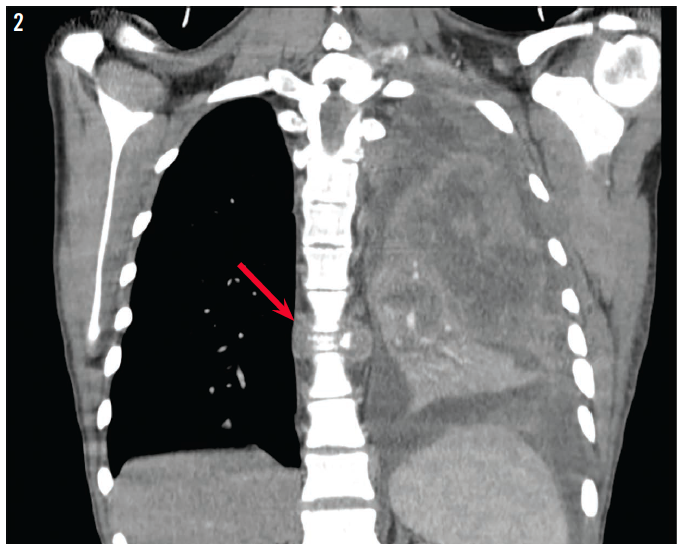 Repeat CT of the chest revealed a 9 × 4-cm anterior mediastinal soft tissue mass, a large cavitary left upper lobe mass, and a destructive lesion involving the T8 vertebral body (Figures 1 and 2). Magnetic resonance imaging of the spine revealed evidence of metastatic disease involving the T3 and T8 vertebral bodies with extension into the paravertebral and epidural spaces and significant mass effect on the thoracic spinal cord (Figures 3 and 4). A follow-up nuclear medicine bone scan was significant for metastatic disease involving vertebral bodies T3 and T8 and the sternum (Figure 5).

After much discussion among subspecialists as to the best way to obtain a diagnosis, the patient underwent a CT-guided biopsy of the mediastinal mass. Pathology test results revealed Hodgkin lymphoma, nodular sclerosing type. Results of bone marrow and cerebrospinal fluid cultures were negative bacteria, viruses, and fungi. Due to presence of metastatic vertebral disease, she received a diagnosis of stage IVB Hodgkin lymphoma.

The patient underwent 6 courses of myelosuppressive chemotherapy and received radiation therapy at the initial sites of her disease. After treatment, a positron emission tomography scan showed an area of uptake in the right upper lobe that was suspicious for disease. She was referred to St. Jude Children’s Research Hospital for additional evaluation. She was found to have refractory disease, and she began chemotherapy with plans for an autologous stem cell transplant.

Hodgkin lymphoma represents 7% of all childhood cancers.1 It is the most common cancer in teenagers from 15 to 19 years old, with a higher incidence in girls.1

Presenting symptoms include painless and often rapidly growing lymphadenopathy of the cervical, supraclavicular, or axillary chain nodes, or a mediastinal mass.2 Some patients present with systemic “B symptoms” of fatigue, weight loss, and anorexia.2

Diagnosis is achieved when characteristic Reed-Sternberg cells are seen on biopsy of the involved lymph nodes or tumor.3 Staging is based on the extent of lymph node involvement and extranodal spread and determines the treatment protocol.3,4 Survival rates approach 81% with current pediatric chemotherapy protocols.4 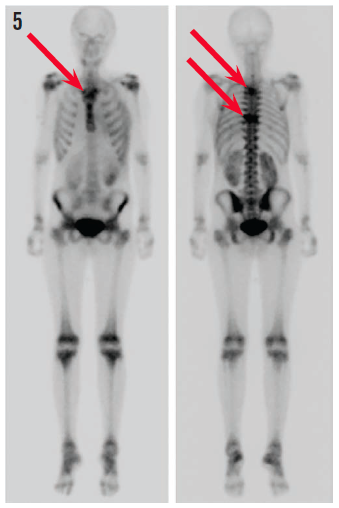 Vicki R. McGowan II, DO, is a pediatric resident at Palms West Hospital in Loxahatchee, Florida.

Randi Sperling, DO, is an assistant professor of clinical biomedical science and the third-year pediatric clerkship director at the Charles E. Schmidt College of Medicine at Florida Atlantic University in Boca Raton, Florida.