ADHD and the DSM-5: Update on Revisions to Diagnostic Criteria

ABSTRACT: The American Psychiatric Association recently released the fifth edition of the Diagnostic and Statistical Manual of Mental Disorders (DSM-5), which includes revisions to the diagnostic criteria for attention-deficit/hyperactivity disorder (ADHD). The revisions aim at better identifying ADHD symptoms across the lifespan.

While the specific criteria have not been fundamentally changed, they have been augmented with specific examples of possible symptom presentation in children, adolescents, and adults. The age of symptom onset has been expanded, and the number of symptoms required for ADHD diagnosis in older adolescents and adults has been reduced.

The diagnostic domains of ADHD are now matched to the ICD-10-CM classification system. Among other changes related to ADHD are the diagnostic requirement for the presence of several symptoms in more than one setting, and the removal of pervasive developmental disorder as an exclusion for the diagnosis of ADHD.

Attention-deficit/hyperactivity disorder (ADHD) is one of the most common behavioral conditions seen by primary care pediatricians. Estimates of its prevalence in the school-aged population range from 4% to 12%, although the rates of diagnosis have been increasing.1 Because most children with ADHD are seen and managed by a pediatrician rather than a child psychiatrist, the American Academy of Pediatrics (AAP) in 2000 and 2001 published a set of clinical practice guidelines for the diagnosis and management of ADHD.2,3

For the diagnosis of ADHD, the AAP guidelines emphasized the use of explicit criteria from the fourth edition of the Diagnostic and Statistical Manual of Mental Health Disorders (DSM-IV); the importance of obtaining information about the child’s symptoms in more than one setting, and especially from the schools; and the search for coexisting conditions.

For ADHD treatment, the guidelines emphasized (1) consideration of ADHD as a chronic condition, (2) explicit negotiations about target symptoms, (3) the use of stimulant medication and behavior therapy, and (4) close monitoring of treatment outcomes and failures.

In 2011, the AAP’s subcommittee on ADHD published a revised clinical practice guideline that incorporated new research on the diagnosis and treatment of ADHD.4 While the 2011 guideline continued to emphasize the main elements of diagnosis and treatment articulated in 2000 and 2001, it expanded the age of evaluation from 6-12 years to 4-18 years. The 2011 guideline also provided guidance on specific treatment strategies for preschool and adolescent patients.

In May 2013, the American Psychiatric Association replaced the DSM-IV,5 which had been published in 1994 and most recently updated in 2000, with the revised fifth edition (DSM-5).6 The DSM-5 contains revisions to the standards for the diagnosis of ADHD. The revisions are intended to help better identify symptoms of ADHD across the lifespan, and the criteria now provide age-appropriate diagnostic exemplars for adolescents and adults. Reflecting this view, the DSM-5 now lists ADHD under the heading of “Neurodevelopmental Disorders” rather than under “Diagnoses Usually First Made in Infancy, Childhood, or Adolescence.” 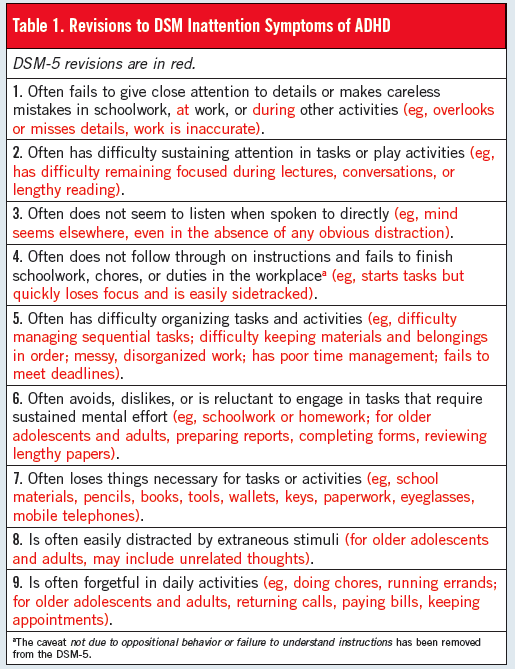 Although the exact mechanism of ADHD is not completely understood, the DSM-5 definition characterizes ADHD as symptoms that “have persisted for at least 6 months to a degree that is inconsistent with developmental level and that negatively impacts directly on social and academic/occupational activities.” While the specific symptoms for inattention or hyperactivity/impulsivity have not fundamentally changed in the revised text, the lists have been amended to include examples of how these symptoms might present in the lives of children, adolescents, and adults. Revisions of the specific symptoms of inattention are listed in Table 1, and those of hyperactivity/impulsivity in Table 2.

As in the DSM-IV diagnostic criteria, ADHD in the DSM-5 is further defined by whether the symptoms are predominantly inattentive, predominantly hyperactive/impulsive, or combined. However, the DSM-5 terms are aligned with the presentation specifiers for ADHD outlined in The International Statistical Classification of Diseases and Related Health Problems, 10th revision, clinical modification (ICD-10-CM) lexicon, rather than on the diagnostic subtypes of ADHD in the previous version, the ICD-9-CM.7 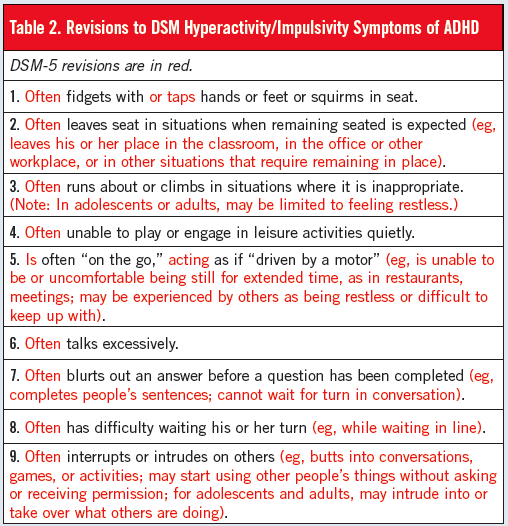 In assessing the symptoms of ADHD, clinicians need to determine whether these complaints have been present over a long period, exist in more than one setting, and cause a significant functional impairment in these settings. These requirements still are present in the DSM-5 criteria, but with a notable expansion in the age of symptom onset. In past DSMs, the requirements for symptom timing included having been for more than 6 months and evidence that “ADHD symptoms that caused impairment were present before age 7 years.” The DSM-5 maintains the 6-month window, but it the wording and age of onset have been revised to “several inattentive or hyperactive-impulsive symptoms were present prior to age 12 years.” This change has been made in recognition that ADHD symptoms in early childhood often are difficult to recall retrospectively for adolescents and adults.

Less-pronounced changes have been made for the context of symptoms and evidence of functional impairment. For example, the DSM-IV verbiage, “Some impairment from the symptoms is present in two or more settings (eg, at school [or work] and at home),” has been revised to read, “Several inattentive or hyperactive-impulsive symptoms are present in two or more settings (eg, at home, school, or work; with friends or relatives; in other activities).” Similarly, the description of functional impairment has undergone a slight change, from “There must be clear evidence of clinically significant impairment in social, academic, or occupational functioning” to “There is clear evidence that the symptoms interfere with, or reduce the quality of, social, academic, or occupational functioning.” These changes have been made to provide examples of how ADHD symptoms may present in older adolescents and adults.

Both versions of the DSM diagnostic criteria explicitly state that the symptoms of ADHD are “not better explained by another mental disorder,” and both detail the comorbid conditions often seen with ADHD, as well as diagnoses (eg, a mood disorder) that may better explain symptoms. For example, clinicians should rule out the possibility that symptoms of inattention or hyperactivity/impulsivity are not solely a manifestation of oppositional behavior, defiance, hostility, or failure to understand tasks or instructions.

However, unlike the DSM-IV, the DSM-5 does not include pervasive developmental disorder as an exclusion criteria for the diagnosis of ADHD. This change reflects the fact that children with autistic spectrum disorder can exhibit symptoms of inattention and hyperactivity/impulsivity that are identical to those seen in ADHD. While it sometimes is difficult to identify whether a symptom is due to autism spectrum disorder or ADHD, the revised DSM-5 criteria recognize that the two conditions can exist simultaneously in the same person.

In the DSM-5, the list of differential diagnoses is expanded and is presented along with comorbid conditions using specific descriptors. These conditions include the following:

Other considerations in the differential diagnosis of ADHD include sleep disorders, since children with poor sleep can present with hyperactivity and poor attention; family stress, such as any recent deaths, separations, or other stressors; and whether the child has a chronic illness, poor nutrition status, or other barrier to good health.

In addition to the above revisions to the diagnostic criteria, the layout of the DSM-5 has been restructured to include separate headings for culture-related diagnostic issues and gender-related diagnostic issues. This contrasts with the DSM-IV, in which cultural and gender issues had been grouped together under the heading of “Specific Culture, Age, and Gender Features.” In both versions, the American Psychiatric Association posits that cultural variations in the diagnosis of ADHD likely are related to differences in diagnostic practices rather than to specific differences in patients’ symptoms. However, the DSM-5 more specifically discusses the impact of social perceptions of normal childhood behavior as a factor when eliciting symptoms from parents and teachers.

With respect to gender issues, both versions of the DSM identify the higher prevalence of ADHD in boys than in girls (2:1) and note that girls are less likely to present with hyperactive/impulsive features. In keeping with the increased attention on ADHD across the lifespan, the DSM-5 also reports the male-to-female ratio for adults (1.6:1).

The diagnosis of ADHD should be based on the revised criteria articulated in the DSM-5. The main differences between the previous criteria and the new criteria are the expansion of symptom onset from 6 years of age to 12 years of age; a reduction from 6 to 5 symptoms required for diagnosis in patients aged 17 years and older; and the removal of pervasive developmental disorder as an exclusion for the diagnosis of ADHD.

The DSM-5 and the 2011 AAP guideline emphasize the need to fully explore other potential causes of hyperactivity and/or diminished attention. This includes considering a child’s symptoms in light of his or her level of cognitive and emotional development, and surveying for conditions such as depression, anxiety, sleep disturbance, child abuse and neglect, sensory integration issues, and primary vision or hearing disturbance.

While there are no firm guidelines for long-term follow-up of patients, a chronic illness model should be adopted to assess for changes in ADHD symptoms and the emergence of comorbid conditions over time.

4.
American Academy of Pediatrics Steering Committee on Quality Improvement and Management, Subcommittee on Attention-Deficit/Hyperactivity Disorder. ADHD: clinical practice guideline for the diagnosis, evaluation, and treatment of attention-deficit/hyperactivity disorder in children and adolescents. Pediatrics. 2011;128(5):1007-1022.

Dr Brown is assistant professor of pediatrics at Tufts University School of Medicine and medical director of clinical informatics at Baystate Health in Springfield, Massachusetts.