An 8-year-old previously healthy girl presented initially to the emergency department (ED) with acute onset of nonbloody, nonbilious emesis and loose, nonbloody, nonmucoid stools, along with a 2-day history of fever as high as 39.4°C. Rapid streptococcal test results were positive, and she was discharged home with amoxicillin and supportive care.

Over the next 5 days, her fevers resolved, but her gastrointestinal symptoms persisted. Two days before presenting to the ED again, her symptoms had progressed to include abdominal pain, gross hematuria with clots, and dysuria.

The differential diagnosis for her gross hematuria was broad and included infectious, vasculitic, rheumatologic, intrarenal, and anatomic etiologies. 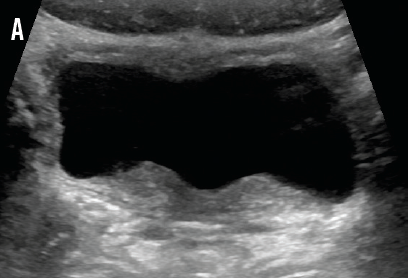 IgA and C4 values were normal, and the C3 value was slightly elevated, which decreased the likelihood of IgA nephropathy, PSGN, and lupus nephritis. Normal kidney function made ATN less likely. A normal IgA level and a lack of skin or joint manifestations ruled out HSP. Urine and stool bacterial cultures returned negative. Renal ultrasonography demonstrated normal kidneys with minimal bladder wall thickening (A and B) and an incidental finding of uterus didelphys. The patient continued to pass clots in her urine, prompting further investigation for viral hemorrhagic cystitis. Urine polymerase chain reaction (PCR) test results were negative for BK virus, but PCR results for urine and serum adenovirus returned positive on hospital day 3.

Human adenoviruses are double-stranded DNA viruses that comprise more than 50 serotypes and cause a variety of illnesses, including pharyngitis, gastroenteritis, respiratory tract infections, conjunctivitis, and more rarely, hemorrhagic cystitis, hepatitis, or pancreatitis. Transmission occurs via inhalation of aerosolized droplets, direct contact with infected tissue, or fecal--oral spread. The incubation period ranges from 2 to 14 days.1 Unlike other respiratory tract viruses, adenoviruses do not demonstrate seasonality, and infections can occur throughout the year.2 UTIs caused by adenovirus more frequently occur among hematopoietic stem cell or solid transplant recipients and other immunocompromised individuals. Most cases in immunocompetent individuals are self-limited. Additional pathogens causing viral hemorrhagic cystitis include cytomegalovirus, BK virus, and JC virus, though these are rarely seen in immunocompetent persons.3,4 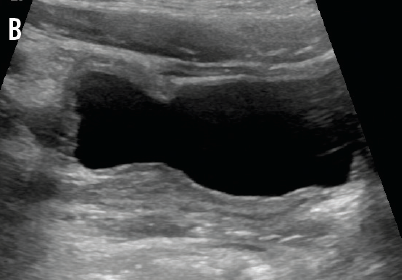 Our patient’s gross hematuria slowly self-resolved, and she remained normotensive. However, her hospitalization was extended due to prolonged nausea and an inability to tolerate oral intake, which ultimately resolved with supportive care. She was discharged home on hospital day 6 and has had no further sequelae.