A 13-year-old boy with a history of intermittent asthma and seasonal allergies presented with an acute onset of a patchy, pruritic, and erythematous rash. The lesions had started on both arms and had spread to the face, hands, and abdomen; it spared the legs and feet.

One day after the rash appeared, he noticed bilateral, painless swelling of his scrotum that was associated with pruritus and burning upon urination. He denied an abnormal urine stream, urethral discharge, or hematuria. There had been no contact with environmental allergens such as poison ivy. There was no history of trauma, exposure to new medications, or sexual activity.

On physical examination, the boy was afebrile. Nontender, urticarial lesions were noted on the face, lower abdomen, arms, and hands. The genital examination revealed significant swelling of the scrotum and the penile foreskin without erythema, ulcerations, or tenderness (Figure). There was no urethral discharge. Both testes were descended and had no palpable masses. 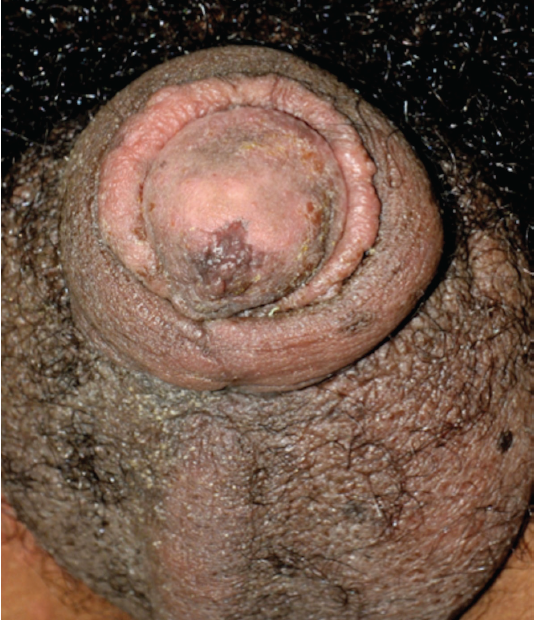 He was admitted to the hospital and was started on hydroxyzine. During the first 24 hours of hospitalization, the pruritus and scrotal swelling worsened. As a result, prednisone was started and the dosage of hydroxyzine was increased. Subsequently, the rash improved, the pruritus decreased, and the scrotal swelling diminished significantly. He was discharged home to complete a 5-day course of prednisone and hydroxyzine.

This patient’s clinical presentation is consistent with acute idiopathic scrotal edema, also known as summer penile syndrome,1 or morphologically, “lion’s mane penis.” This is a rare, self-limited condition characterized by an acute onset of nontender scrotal edema with associated edematous extension to the penile shaft and inguinal region. The scrotal edema can be unilateral or bilateral. In one study, 4 of 6 patients with the condition reported intense genital pruritus.2 In persons 20 years of age or younger, it is the fourth most common cause of acute scrotal pathologies, following epididymitis, testicular torsion, and torsion of appendages.3 The pathogenesis is largely unknown, although it is considered a hypersensitivity reaction related to a variant of angioneurotic edema with associated eosinophilia.4,5

This condition is primarily a diagnosis of exclusion. Laboratory studies, including a complete blood count, urinalysis, urine cultures, and other investigations for sexually transmitted infections, are generally unremarkable. However, Klin and colleagues6 reported the occasional presence of eosinophilia in patients with this condition. Ultrasonography demonstrates scrotal wall edema and hypervascularity of the deep external and internal pudendal arteries. Geiger and colleagues7 have described the “fountain sign,” which represents hypervascularity on Doppler ultrasonography.

Treatment typically is supportive care. Antihistamines and corticosteroids can be beneficial but have not been demonstrated to be effective in some studies.8,9 While the clinical course often is benign, it is crucial to correctly diagnose this condition in order to avoid unnecessary surgical intervention.