A 14-month-old white girl was brought to the clinic by her parents for a violaceous, “scary-looking” rash on her right thigh that had started the previous day.

Review of the girl’s symptoms was unremarkable except for mild nasal congestion. She had no fever, fussiness, cough or other cold symptoms, or changes in bowel habit. She had had no known contact with ill persons.

Her immunizations were up to date; 2 weeks previously, she had received the Haemophilus influenzae type b vaccine, the pneumococcal conjugate vaccine, and her first influenza vaccine. During the history, her parents noted that the girl had been exposed to acorn squash, strawberries, and cantaloupe within last several days. 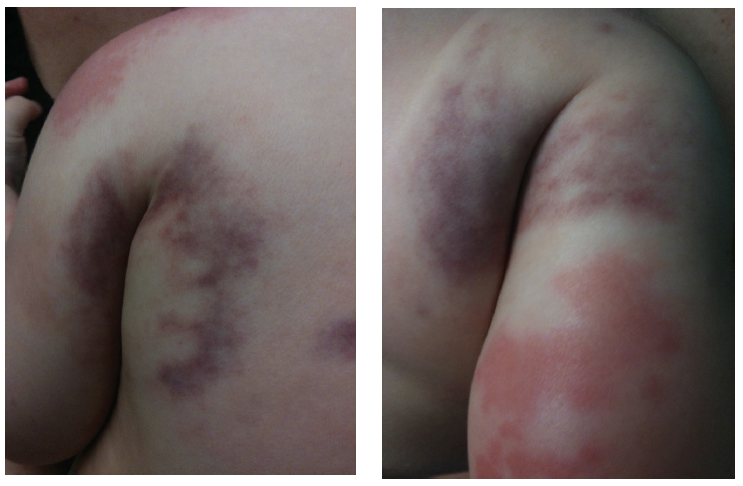 She returned to the clinic the next day with changes in the existing rash and the onset of a new rash, but again with no systemic or constitutional symptoms.

Her past medical history was unremarkable for chronic medical illness. She was born at 37 weeks and 5 days of gestation with a birth weight of 3,845 g, and had had an unremarkable neonatal course. Her parents smoke cigarettes outside the home. There were no plants or pets in the home. She had no history of recent travel.

On physical examination, the girl was alert, smiling, playful, and not in any apparent pain or distress. Her conjunctivae were clear, without injection or discharge, and the results of ear, nose, and throat examinations were normal. The lungs were clear, without any added sounds. Findings of cardiovascular, gastrointestinal, and neurologic evaluations were normal. No adenopathy or organomegaly were detected.

Dermatologic examination revealed diffuse, erythematous, violaceous, purpuric, maculopapular, patchy lesions, with widespread distribution but sparing the palms, soles, and face. The lesions were warm to the touch and nontender, with no discharge. Older lesions had some central clearing.

Results of a complete blood count with differential showed a white blood cell count of 13,000/µL, with 48% segmented neutrophils, 44% lymphocytes, 1% monocytes, and 3% eosinophils. Platelet count was 513 × 103/µL. Rapid group A streptococcus test results were negative. Results of urinalysis were negative for protein, nitrites, and leukocyte esterase.

After consultation with pediatric dermatology, the diagnosis of acute hemorrhagic edema of infancy (AHEI) was made. The girl was sent home with reassurance for her parents, who were instructed to follow up with the girl’s primary care provider and for laboratory monitoring.

The next day, however, her parents brought her in again for new-onset fever, with a maximum rectal temperature of 39.2°C. The rest of the examination findings were comparable with those of the previous days.

AHEI is a leukocytoclastic vasculitis of infancy and young childhood, with a peak incidence between 6 and 24 months of age.1 It is closely related to Henoch-Schönlein purpura (HSP), although there is debate about whether AHEI is a distinct condition or a variant of HSP, with some experts suggesting a common pathogenesis.

AHEI is characterized by a local increase in temperature, erythematous edema, and purpuric lesions that mainly involve the face and extremities without visceral involvement. The acute onset of symptoms and the patient’s otherwise good general condition are characteristic. AHEI is self-limited with a benign clinical course. Infection, medications, and immunizations have been considered as precipitating factors. The main differential diagnosis is HSP. While systemic involvement similar to that of HSP can occur, it is uncommon in AHEI.2,3 Follow-up studies include urinalysis to detect protein and blood indicating renal involvement.

Our patient’s fever subsided in 4 to 5 days. When she was seen 2 months later for her 15-month well-child visit, she had recovered completely. Results of urinalysis done at that time and at a subsequent visit 2 months later were completely normal.