An 8-year-old boy was admitted to the pediatrics department for evaluation of severe intermittent headache (10 of 10 in intensity), ataxia, confusion, and slurring of speech. These symptoms were associated with a loss of appetite and an episode of fainting. His past history included an episode of tactile fever 2 weeks ago, which had been managed by his general practitioner with ibuprofen and oral hydration. There were no complaints of fever, rash, diarrhea, visual defects, vomiting, nausea, photophobia, aura, or trauma. 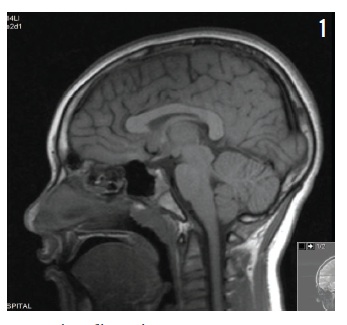 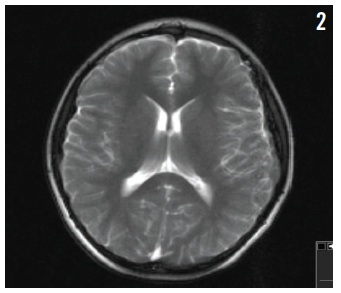 The patient lost the ability to sit up and to hold a sitting position. His ataxia and dysmetria worsened, and on day 2 he was started on a regimen of corticosteroids and physiotherapy. He continued to be dizzy and developed nausea and vomiting.

On day 3, he was irritable, screaming in pain when he attempted to move in the bed. He was largely mute, but occasionally whispered single words, articulated unclearly. Despite not having left the hospital bed, he seemingly had preserved comprehension. He also had an intention tremor when pointing to an object. Another MRI showed no abnormal findings.

Because of the worsening symptoms, lumbar puncture was performed on day 4. Cerebrospinal fluid (CSF) analysis revealed inflammatory changes, with negative viral study and culture results. Prompted by the behavioral changes, the patient was started on acyclovir and ceftriaxone.

Persistent mutism, irritability, and the inability to change body position prompted intervention with intravenous immunoglobulin (IVIG) therapy, which was chosen due to the absence of features of cerebellitis on MRI scans, which instead would have suggested a regimen of corticosteroids. A 3-day course of IVIG, 0.4 g/kg/d, was initiated. After the first dose, the child showed tremendous improvement. His gait improved over the following week, and his dysdiadochokinesia also showed marked improvement. He was able to speak and walk with a little help, with occasional leaning to one side. This improvement, and the latent phase of approximately 2 weeks between fever onset and ataxia, suggested a possible autoimmune etiology of his condition.

CSF culture results were negative; tests for herpes simplex virus 1 and 2, West Nile virus, Epstein-Barr virus, and cytomegalovirus also were negative, and the antibiotics were discontinued. The boy was discharged 2 days after having completed the IVIG course.

Acute cerebellar ataxia (ACA) is a fairly common childhood condition, and acute postinfectious cerebellar ataxia (APCA) is one of the most common types of ACA.1 The most common etiology of APCA is viral infections, especially varicella infection.1 Other causes of ACA in children include intoxications, paraneoplastic syndromes, trauma, and migraine. Less frequent causes are acute cerebellitis and opsoclonus myoclonus syndrome.

The diagnosis of APCA is clinical and usually is evidenced by the explosive, “overnight” development of ataxia. Truncal ataxia is a common feature of APCA but is limited to gait ataxia. Sensorium is preserved, and very rarely the child is overwhelmed by the inability to hold his balance.

ACA is defined as the sudden onset of disturbance of gait and balance.2 APCA is more common among preschool-aged children, and it generally is preceded by a prodromal viral infection, approximately 10 to 15 days before onset.1,2 Boys are more prone to developing ACA after infections, and they tend to have worse gait dysfunction and cranial nerve palsies, along with nystagmus.2

The pathophysiology of APCA still is not understood. Studies conducted so far point to a postinfectious autoimmune process and direct viral invasion of the central nervous system (CNS) as the potential mechanisms underlying APCA.3 Hankey and colleagues suggested that an invasion of the CNS by virus-altered B lymphocytes might be one of the causes of APCA.4 The presence of a latent period between the viral illness and the onset of ataxia, as well as the absence of a viral antibody in the CSF, usually suggests an autoimmune etiology of APCA rather than a direct viral invasion.3,5

APCA is a benign condition, with self-recovery occurring in almost all cases, and with no need for ancillary studies or treatment with anti-inflammatory agents such as corticosteroids. The reported recovery time for the neurologic signs and symptoms varies: Full gait recovery required approximately 2 weeks on average in one study6 and 2 months on average in another study.2 Although complete resolution occurs in most cases, transient neurologic defects such as gait ataxia and fine motor skill deficits have reportedly have persisted for years in a few patients.2

In some cases of APCA, truncal ataxia can progress within days, with the appearance of symptoms of raised intracranial pressure and pyramidal insufficiency. In such cases, brain MRI scans may reveal hyperintense signals and swelling in the cerebellum, confirming cerebellitis. This diagnostic feature has been debated as either the worst end of a clinical continuum of APCA or a separate infectious cerebellar disorder. Permanent deficits also have been reported in rare cases.2

APCA essentially is a diagnosis of exclusion; thus, other causes of acute cerebellar ataxia such as intoxications, paraneoplastic syndromes, trauma, and migraine must be excluded during the course of a thorough diagnostic workup.

Management of APCA is watchful waiting, with or without physical therapy.7

Neha Gupta, MD, is at the Department of Pediatrics at Lincoln Medical and Mental Health Center in the Bronx, New York.

Saurabh Talathi, MD, MPH, is at the Department of Pediatrics at Lincoln Medical and Mental Health Center.

Maritza Feliz, MD, is at the Department of Pediatrics at Lincoln Medical and Mental Health Center.

Naresh Reddivalla, MD, is at the Department of Pediatrics at Lincoln Medical and Mental Health Center.

Sergey Prokhorov, MD, is at the Department of Pediatrics at Lincoln Medical and Mental Health Center.

Magda Mendez, MD, is at the Department of Pediatrics at Lincoln Medical and Mental Health Center.

Conference Coverage
Conference Coverage
Evolving Management Strategies in MDD: Smarter Choices After Unsuccessful First-Line Treatment
Since 2009, the prevalence of major depressive disorder (MDD) in adults has steadily increased. In 2020 alone, approximately 21 million people experienced MDD with the highest percentage occurring in adults...
Conference Coverage
Conference Coverage
Measurement-based Care For Patients With MDD
Clinicians, particularly those treating major depressive disorder (MDD), know all too well that symptom presentation does not guarantee a quick and accurate diagnosis. There are many factors at play, from...
Comorbid conditions
Comorbid conditions
COVID-19 Roundup: New Onset Alzheimer Disease, Elevated Risk for Thrombotic Diseases, and More
This COVID-19 roundup discusses the risk of new onset Alzheimer disease, vascular events, and atrial fibrillation after COVID-19 infection, and the impact of vaccination against COVID-19 in individuals on...
management
management
Updated Guidelines Released on Major Depressive Disorder Management
A joint clinical practice guideline on the management of major depressive disorder was released earlier this year, which included 36 recommendations on screening, monitoring, and treating this condition. ...
treatment
treatment
Treatment Adherence Decreases Risk of Rehospitalization in Adults With OSA, CVD
Researchers examined the impact of adherence to continuous positive airway pressure therapy on the risk of rehospitalization in individuals with comorbid obstructive sleep apnea and cardiovascular disease. ...