A 6-year-old girl presented with an asymptomatic, skin-colored, lesion in the right preauricular area, which had been first noted at birth. The lesion had very slowly increased in size over time in proportion to the body size of the child. She had been born via normal vaginal delivery to a 28-year-old primigravida at 38 weeks of gestation following an uncomplicated pregnancy. The parents were nonconsanguineous, and there was no family history of similar lesions. The neonatal course had been uneventful, and there was no history of trauma. Developmental milestones were normal. The child was otherwise in good health. Findings of a review of systems were unremarkable.

Physical examination revealed a solitary, skin-colored, firm, nontender, pedunculated nodule measuring 2 mm wide by 8 mm long in the right preauricular area (Figure). The rest of the examination findings were normal. In particular, there were no other cutaneous abnormalities or dysmorphic features.

Based on the history and clinical appearance, a diagnosis of accessory tragus was made. The parents were reassured of the benign nature of the lesion and that no treatment was necessary. However, the parents opted for surgical removal of the lesion for cosmetic reasons. A small elliptical excision with removal of the lesion and the underlying cartilage was performed. Histologic examination of the excised specimen showed numerous hair follicles and sebaceous glands, prominent connective tissue, abundant fat lobules, and a central core of cartilage, thus confirming the diagnosis of accessory tragus. 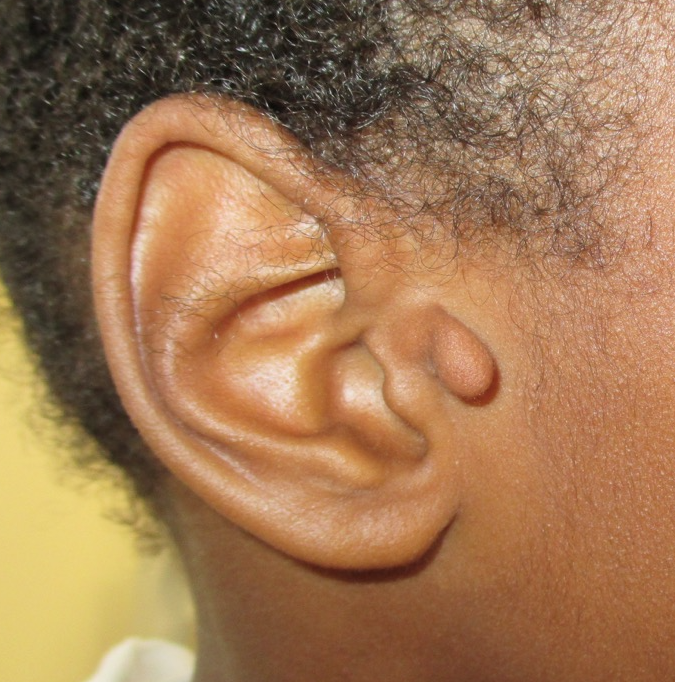 Discussion. The word tragus is derived from the Greek word tragos, meaning goat and referring to the hairy part of the ear. The term accessory stands for something additional besides the original. As such, the accessory tragus is an extra to the normal tragus. Accessory tragus is a congenital anomaly that typically presents at birth as a solitary, sessile or pedunculated, flesh-colored papule or nodule located in the preauricular area.1 The condition was first described in 1858 by Birkett.2 Synonyms include heterotrophic tragus and supernumerary tragus.3,4 The terms preauricular skin tag, accessory auricle, rudimentary auricle, polyotia, and supernumerary pinna are misnomers, since accessory tragus derives solely from the first hillock of His, and these terms suggest otherwise.3,5

Epidemiology. The prevalence is estimated to be 0.1% to 0.3% of all live births.6,7 There is no sex predilection.8 Most cases are sporadic, but familial cases have also been described.9,10

Embryology. The auricle is formed from the fusion of 6 mesenchymal tubercles (hillocks of His) on the surface of the embryo. Three of these hillocks are derived from the first branchial (mandibular) arch, and 3 from the second branchial (hyoid) arch during the fifth or sixth weeks of intrauterine life.11 The ventral portion of the first hillock contributes to the mandible, while the dorsal portion forms the tragus.11 The second and third hillocks develop into the helix and cymba concha, while the fourth, fifth, and sixth hillocks develop into the concha, antihelix, and antitragus.5,12,13 The formation of the auricle is usually complete by the 12th week of intrauterine life. An accessory tragus involves a minor aberration and failure of complete fusion of the first hillock and appears along the migratory line of the ascending pathway of the auricle from the lower lateral neck to the side of the head level with the eyes.3

Histopathology. Histologic findings include mild orthokeratosis overlying the epidermis, numerous hair follicles with sebaceous glands in the papillary dermis, prominent connective tissue network in the subcutaneous fat, and fibrovascular tissue with fat lobules, with or without a cartilaginous component surrounded by a fibrous capsule.1,5,8,11,14

Clinical manifestations. Typically, an accessory tragus presents at birth as an asymptomatic, solitary, skin-colored, sessile or pedunculated, soft or firm papule or nodule, frequently covered in vellus hair.11,13 The lesion is usually unilateral and located most commonly on or near the tragus and, less commonly, from the tragus to the angle of the mouth or along the anterior margin of the sternocleidomastoid muscle.5,13 Atypical locations include the nasal vestibule, middle ear, glabella, and the suprasternal area.2,12,15 Bilateral lesions are present in approximately 6% of cases.6,16,17

In the vast majority of cases, an accessory tragus is an isolated finding, not associated with other abnormalities. At times, it may be associated with anomalies of the first brachial arch, such as cleft lip, cleft palate, and hypoplasia of the mandible. Accessory tragus may also be a feature of Goldenhar syndrome (oculo-auriculo-vertebral dysplasia), Treacher Collins syndrome (mandibulofacial dysostosis), Townes-Brocks syndrome, VACTERL (vertebral defects, anal atresia, cardiac defects, tracheo-esophageal fistula, renal anomalies, and limb abnormalities) association, Wolf-Hirschhorn syndrome (4p- syndrome), Haberland syndrome, Down syndrome, Delleman (oculocerebrocutaneous) syndrome, and otomandibular dysostosis (hemifacial microsomia).3,5,11,18,19,20 This is especially so when the lesions are multiple.19,20

Diagnosis. The diagnosis is mainly clinical, based on the history and physical findings. When in doubt, the diagnosis can be confirmed by histopathology.

Complications. The condition can be cosmetically unsightly. Affected patients are at slight increased risk for hearing impairment, renal anomalies, and cardiac anomalies.1,3

Prognosis. The lesion is benign, and the prognosis is excellent.

Management. Because the condition is benign, no treatment is necessary apart from reassurance. Surgical removal may be considered for cosmesis.4 If so, optimal outcome can be achieved via an elliptical incision with excision of the lesion and any underlying cartilage.3,11 Incomplete excision may leave an exposed cartilage fragment, which may predispose to chondrodermatitis.