Abrupt-Onset Low Back Pain With Fever and Elevated Inflammatory Markers

A 73-year-old man with a history of hypertension, type 2 diabetes, aortic stenosis, and coronary artery disease presented to the emergency department reporting a 24-hour history of left flank pain that had started abruptly and a concurrent fever.

History. Four days earlier, the patient had undergone a diagnostic left-heart catheterization as part of an evaluation for valve-replacement surgery due to severe aortic stenosis, and the procedure had been performed without complications. The results of the catheterization indicated multivessel disease, and coronary artery bypass grafting was recommended to be done at the time of aortic valve replacement.

At presentation, the patient denied any concurrent symptoms such as headache, chest pain, dyspnea, productive cough, abdominal pain, urinary tract symptoms, or change in bowel habits. His vital signs were stable with the exception of an elevated temperature of 39°C.

Physical examination. On physical examination, he appeared nontoxic, with normal cardiopulmonary sounds on auscultation, save for a grade 3/6 crescendo-decrescendo systolic murmur at the upper left sternal border. Results of a fundoscopic examination were normal, and he had no neurologic deficits and no embolic stigmata. Abdominal examination findings were benign, and there was no costovertebral angle tenderness. However, flexion of the left hip was significantly reduced due to pain, and the patient reported tenderness to palpation just superior to the left iliac crest. The site of catheterization insertion in the left groin appeared clean, without palpable mass or signs of infection, and with strong distal pulses.

Diagnostic tests. Findings of an initial complete blood cell count showed a normal white blood cell count, a mildly low hemoglobin level of 10 g/dL, and a normal platelet count. Further laboratory tests revealed a low sodium level of 132 mEq/L; an elevated blood urea nitrogen level of 46 mg/dL, and an elevated creatinine level of 1.5 mg/dL; the results of a comprehensive metabolic panel were otherwise normal. He had an indeterminate troponin I level of 0.14 ng/mL, and no ischemic changes on electrocardiography. Urinalysis findings showed only trace protein levels.

Computed tomography (CT) without contrast of the chest, abdomen, and pelvis showed a cyst on the left kidney, but the results were otherwise unremarkable.

We drew blood cultures, started intravenous (IV) vancomycin for empiric gram-positive antibiotic coverage given the recent catheterization, and ordered a magnetic resonance imaging (MRI) scan to look for a retroperitoneal bleed, renal infarct, or discopathy. Initial blood cultures were positive in 2 of 4 bottles for a coagulase-negative staphylococcus, and he had an elevated erythrocyte sedimentation rate (ESR) of 83 mm/h and a C-reactive protein (CRP) level of 17 mg/L.

The patient spiked 2 fevers during the first 4 days, which resolved by hospital day 5, and his pain gradually improved after initiation of an analgesic regimen. He remained free of neurologic deficits throughout his stay. 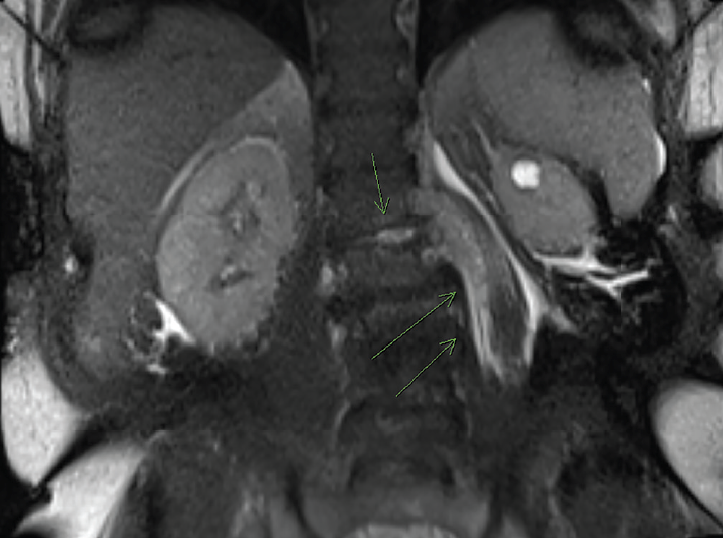 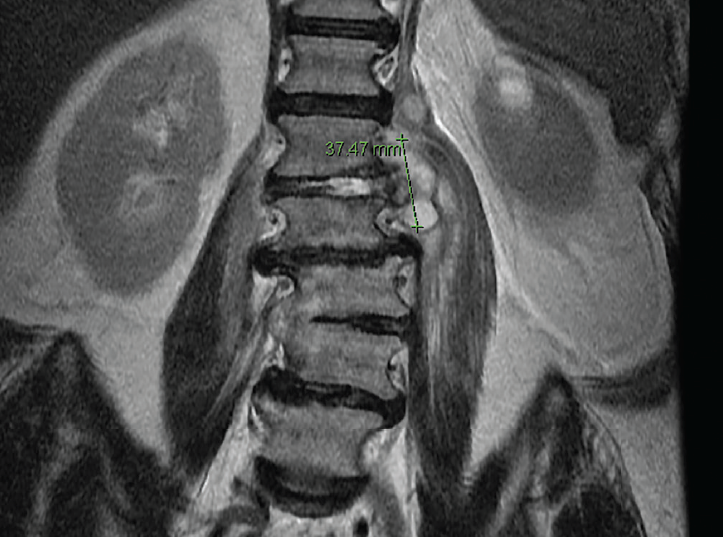 A transesophageal echocardiogram was ordered, the results of which showed no specific vegetations, paravalvular abscess, or aortic insufficiency, but because of chronic changes and calcifications of both the aortic and tricuspid valves, endocarditis could not definitively be ruled out.

Outcome of the case. Our patient was eventually transferred after MRI with contrast showed epidural enhancement suggestive of an early epidural abscess that could potentially require neurosurgical intervention. CT-guided drainage of the abscess was attempted but was unsuccessful due to complicating factors. He ultimately was treated with a 6-week course of IV antibiotics and was closely monitored for complications. He never developed symptoms of spinal cord compression.

S lugdunensis is part of the normal flora of the skin and most commonly causes soft-tissue infections but also has been associated with infective endocarditis, osteomyelitis, and central nervous system infections.1 When S lugdunensis is found in the bloodstream, treatment should not be delayed, because these infections tend to have an aggressive course. Fortunately, the organism is susceptible to most antibiotics and typically is methicillin-sensitive, unlike many other coagulase-negative staphylococcus species. Therefore, empiric treatment with a β-lactam antibiotic or vancomycin is an appropriate initial choice for a S lugdunensis infection.3

When S lugdunensis is found in a patient’s bloodstream, a transesophageal echocardiogram should be ordered to evaluate for endocarditis.4 If abscess formation occurs or new valvular dysfunction is present, surgical drainage may be indicated. In a patient with diskitis, it is important to evaluate for symptoms of spinal cord compression, including lower-extremity weakness, saddle anesthesia, and bowel or bladder incontinence. If these symptoms develop, the infection may have spread posteriorly, causing an epidural abscess, in which case urgent surgical intervention may be warranted.5 Lateral spread of diskitis in the lumbar spine can lead to psoas abscess formation, which presents with pain and limitation with movement of the hip and again may require intervention for definitive source control.

As in our case, the appropriate duration of treatment is at least 6 weeks of IV antibiotics for osteomyelitis, regardless of the status of endocarditis, as measured from the first negative result of surveillance blood cultures. A duration of 6 to 8 weeks is also appropriate for the treatment for diskitis and epidural abscesses,5 depending on severity and extent.

Serial measurement of ESR and CRP and close clinical monitoring should be used to evaluate response to treatment. In osteomyelitis or diskitis, repeat imaging may not be required until after the antibiotic course had been completed to ensure resolution, but in the case of epidural abscess, serial imaging may be indicated depending on the clinical course.

Previously reported cases of vertebral osteomyelitis caused by S lugdunensis suggest that immunosuppression and advanced age are 2 important risk factors.6 The first reported case was in 1996, when an 80-year-old woman who had been treated with glucocorticoids for 2 years developed abrupt lower back pain associated with a fever, mild anemia, and an elevated ESR and CRP level.7 Other similar cases with an abrupt onset of back pain and similar laboratory findings have also been reported.

It is important to consider vertebral osteomyelitis and/or diskitis in a patient who presents with abrupt onset of low back pain, fever, and an elevated ESR and CRP level, particularly in the setting of a recent invasive procedure, including endovascular surgery. S lugdunensis is a rare cause of osteomyelitis, diskitis, and psoas abscess but should be considered in the differential diagnosis in a patient presenting with these symptoms, especially in the setting of known degenerative disk disease, advanced age, or immunosuppression, since these appear to be important risk factors.

Aristides C. Avgeris, MD, is a hospitalist in the Department of Internal Medicine at Augusta Health in Fishersville, Virginia.