Abdominal Pain in a Teen With Sickle Cell Disease: What’s the Source?

A 17-year-old African American boy with sickle cell disease (SCD) was admitted to the emergency department (ED) with a 4-day history of sharp, stabbing abdominal pain and lower back pain. The abdominal pain was rated at 7 of 10, was aggravated with ambulation and coughing, and was partially relieved with nonsteroidal anti-inflammatory drugs (NSAIDs).

He reported no incidence of fever during this period. In the past, the boy had required numerous SCD-related hospital admissions for acute chest, syndrome, priapism, and cardiovascular accident.

On physical examination, his temperature and other vital signs were normal, with the exception of his blood pressure, which was 153/65 mm Hg. There was generalized abdominal tenderness, which was more pronounced in the bilateral lower quadrants, with no rebound tenderness and negative Rovsing and psoas signs.

Results of a complete blood count showed a white blood cell count of 13,200/µL, a hemoglobin level of 11.5 g/dL, and a platelet count of 378 × 103/µL with a predominance of neutrophils (70%). Ultrasonography of the abdomen revealed a 1.2-cm hypoechoic splenic lesion. No abdominal masses or fluid were seen.

He was promptly managed with intravenous fluids and opioid analgesics, which improved his pain slightly. As a result of his concerning laboratory test findings, the patient was admitted and managed as a case of acute sickle cell crisis. Throughout his hospital stay, he stated that this time, the pain was different than the pain he had usually experienced during a pain crisis.

On day 5 of hospitalization, the patient still complained of lower abdominal pain despite opioid analgesics, prompting further ultrasonography scans, the results of which are shown in Figures 1 and 2.

The results of pelvic ultrasonography (Figure 1) showed an elongate, tubular, noncompressible bowel loop in the right lower quadrant, measuring 8 mm, likely representing the appendix with a blind end, and suggesting acute appendicitis with appendicolith but without evidence of perforation. A cross-sectional scan (Figure 2) showed no free fluid or periappendicular fluid collection that would suggest perforation; it also demonstrated the “ring of fire” due to the high vascularity of the inflamed appendix (Figure 3). 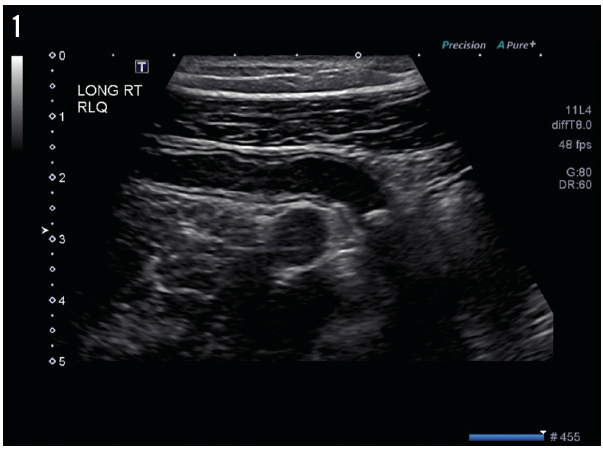 The patient underwent emergent laparoscopic appendectomy. He experienced no complications, and he was discharged home 2 days later.

Acute painful abdominal crisis is the most common cause of acute abdomen in patients with SCD. Other common differential causes among this population are acute splenic sequestration crisis, splenic infarction, intra-abdominal abscess, cholelithiasis, hepatic crisis, pancreatitis, and ischemic colitis.1-4

The incidence of acute appendicitis is significantly lower in persons with SCD (approximately 4.5 cases per 10,000 patient-years) compared with that of the general population (approximately 16 cases per 10,000 patient-years).5 Moreover, appendicitis in persons with SCD follows a more aggressive course, with a higher occurrence rate of gangrene and perforation (66.7%) compared with the general population (5%).6 For this reason, patients with SCD and abdominal pain should be monitored closely and frequently and, when acute appendicitis seems probable, should be operated on early.6 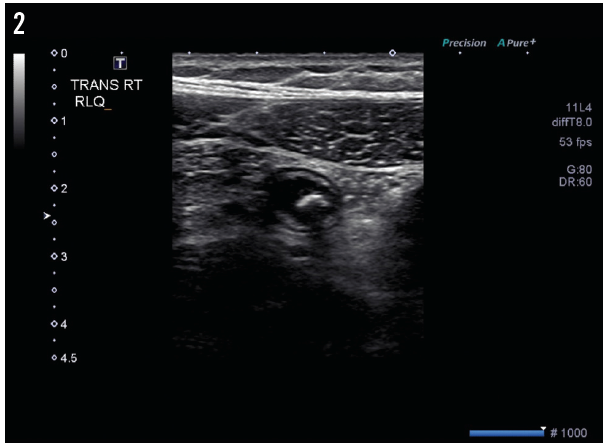 Distinguishing abdominal crisis pain from the pain of appendicitis pain in a patient with SCD is challenging. The presentation of acute appendicitis in patients with SCD is likely to include vomiting and pain localized to the lower abdomen; these symptoms usually are absent in an SCD-related pain crisis. Fever might not be present in cases of appendicitis due to the patient’s use of analgesics such as acetaminophen and NSAIDs before presentation. Furthermore, appendicitis in SCD patients appears to be attributable to vasoocclusion leading to microvascular congestion, in contrast with the general population, in whom the pathogenesis typically is appendiceal obstruction leading to luminal and outer-caliber dilation.6-8

It is important to consider a broad differential diagnosis in patients with chronic pain conditions such as SCD, and due attention must be paid if such a patient complains of pain with a nature and intensity that is different than the usual pain. Appropriate evaluation is the key if results of the physical examination and history are consistent with appendicitis. 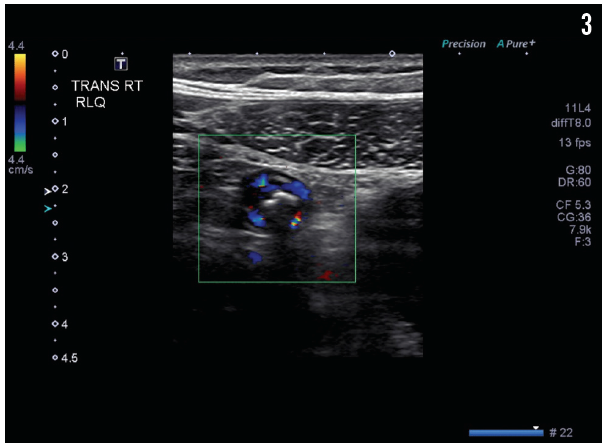 Figure 3. A cross-sectional scan showed a tubular structure—the appendix with appendicolith. The high vascularity of the inflamed appendix creates a “ring of fire” appearance on cross-sectional ultrasonography images.

Muhammad Ubaidulhaq, MD, is a pediatric neurology fellow at Children’s Hospital of Michigan in Detroit, Michigan.

Samie Ullah Ahmed, MD, is a research assistant at Children’s Hospital of Michigan.

Jeffrey W. Taub, MD, is the director of the Pediatric Hematology/Oncology Fellowship Program at Children’s Hospital of Michigan.

7. Rettenbacher T, Hollerweger A, Macheiner P, et al. Presence or absence of gas in the appendix: additional criteria to rule out or confirm acute appendicitis—evaluation with US. Radiology. 2000;214(1):183-187.