Abdominal Mass in an Adolescent Girl

A 15-year-old girl presented with a 2-year history of vague abdominal discomfort. Abdominal distention was noted for the past 6 months with no changes in weight or clothing size. Two months prior to the pediatrician visit, she began experiencing progressive abdominal pain mostly on the right side, unchanged with menses, and not affecting daily activities; pain was relieved with nonsteroidal anti-inflammatory drugs.

Review of systems was positive for nausea without emesis, menorrhagia for last 2 menses, and recent transient bilateral ankle edema. Her medical history included beginning menarche at age 11, being sexually active without use of contraceptives, and having never been pregnant. She was up-to-date on all immunizations and denied any additional high-risk behaviors. The remainder of the patient history was unremarkable. Pelvic ultrasonography revealed a large, midline cystic mass within the abdomen, extending from the xiphoid into the pelvis, measuring 40.3 × 13.6 × 27.6 cm. The patient was subsequently referred to a pediatric oncologist.

Her oncologist noted an initial weight of 93 kg and a protuberant yet otherwise benign abdomen. A mass was palpated in bilateral lower quadrants of the abdomen extending superiorly to the xiphoid process. The remainder of her physical examination was unremarkable. 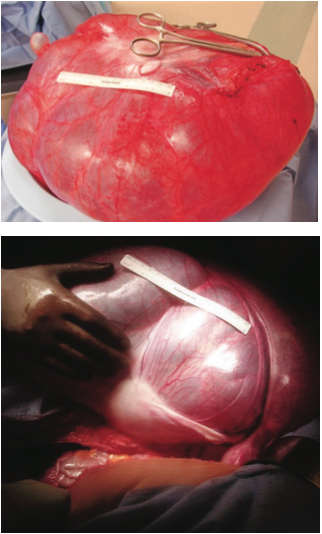 Initial laboratory findings were unremarkable, including normal ß-human chorionic gonadotropin, α-fetoprotein, and CA-125. Computed tomography of abdomen/pelvis with contrast revealed a large thin-walled, intraperitoneal mass, with no free fluid or solid components, and a few thin septations. Additionally, the lesion was exerting a mass effect on the uterus, urinary bladder, and bilateral kidneys.

The patient was also evaluated by a gynecologic oncologist, who recommended exploratory laparotomy for resection. Presurgical laboratory results were unremarkable except for gross hematuria. During surgery, a massively enlarged left ovary with minimal remaining normal ovarian tissue was found. The mass was multiseptated with a smooth and intact capsule. A left salpingo-oophorectomy was performed without rupturing the mass, and an intact right adnexa and uterus remained. Surgical pathology identified the lesion as a benign serous cystadenoma weighing 7 kg.

The patient was discharged home on postoperative day 2 without complication. Her weight at discharge was 81 kg. The patient was seen in the outpatient clinic a week later, and she noted remission of her abdominal pain and hematuria. At this time, she continues to receive routine surveillance by her gynecologist.

For adolescent girls, an abdominal mass is rare with a limited differential. Age of the patient, location of the mass, and clinical presentation are key when considering etiologies. Etiologies for our patient included an appendicle abscess, physiological ovarian cysts, polycystic ovarian syndrome (PCOS), leiomyoma, germ cell tumors, Burkitt lymphoma, pregnancy-related etiologies, and pelvic inflammatory disease.1-3 Our patient was afebrile supporting against infection and had a negative pregnancy test. She also had no clinical or laboratory history supportive of PCOS, and she had negative tumor markers ruling out germ cell tumors or other malignancies. Pathology confirmed an atypically enlarged physiological cyst.

Most physiological cysts resolve within a 2-week to 3-month period. Therefore, the initial line of therapy is observation. Oral contraceptives inhibit the hypothalamic pituitary axis, which decreases new cyst formation. Unfortunately, modern low-dose oral contraceptive pills appear to have minimal efficacy in preventing progression of already enlarged physiological cysts.4 If a cystectomy is performed, the cyst wall should be sent for pathologic examination. Ovarian cystectomy is preferred to cyst aspiration due to the high rate of recurrence after aspiration.5 Every effort should be made to maintain as much normal ovarian tissue as possible.

Cathleen Cook, MD, FAAP, is an assistant professor of medicine in the department of pediatrics, division of pediatric hematology/oncology at East Tennessee State University and St. Jude Tri-Cities Affiliate Clinic, both in Johnson City.