A 9-Year-Old Girl With Fever and Cough

A 9-year-old girl presented to our hospital emergency department (ED) with a 4-day history of fever, anorexia, fatigue, and one episode of diarrhea. The child otherwise appeared well, with no complaints of chest pain, shortness of breath, abdominal pain, nausea, or vomiting. She reported a decreased appetite and had only been drinking water. She had been referred to our ED by her pediatrician, who was concerned that she appeared moderately dehydrated.

On physical examination, her temperature was 39.6°C, heart rate was 122 beats/min, respiratory rate was 22 breaths/min, and oxygen saturation was 100% on room air. The child was well-appearing and in no distress. Her oral mucosa appeared dry.

Cardiac examination findings were normal, and lungs were clear to auscultation bilaterally, without wheezes. A dry, nonproductive cough was noted. Initial laboratory investigation revealed a white blood cell count of 7,200/µL with 79.1% segmented neutrophils, 8.7% monocytes, and 0% eosinophils, along with a serum sodium of 128 mEq/L, potassium of 4.2 mEq/L, and creatinine of 0.7 mg/dL. Intravenous fluids were administered, and a plain radiograph of the chest was obtained (Figure 1). 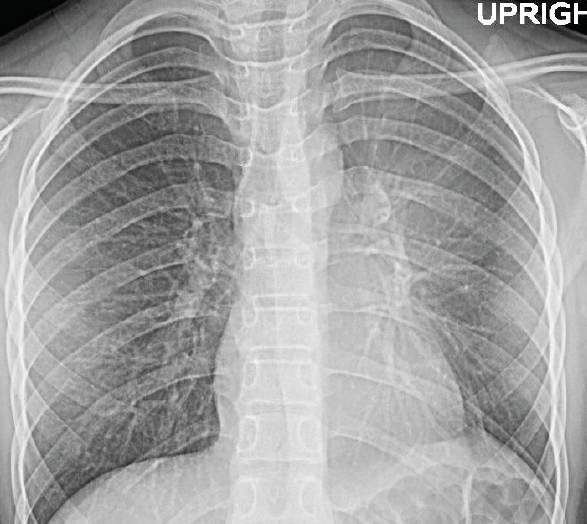 What diagnosis do the radiographic findings suggest?

Flexible bronchoscopy demonstrated that the left upper lobe orifice was coated with mucus and that deeper orifices contained mucus plugs. Mucus was sent for bacterial and fungal cultures, which showed no growth. Results of a serum Mycoplasma pneumoniae immunoglobulin M test showed elevated levels of 858 U/mL. The child improved after being treated with a 7-day course of azithromycin after a presumed diagnosis of mycoplasma pneumonia and left upper lobe atelectasis secondary to mucus plugging. 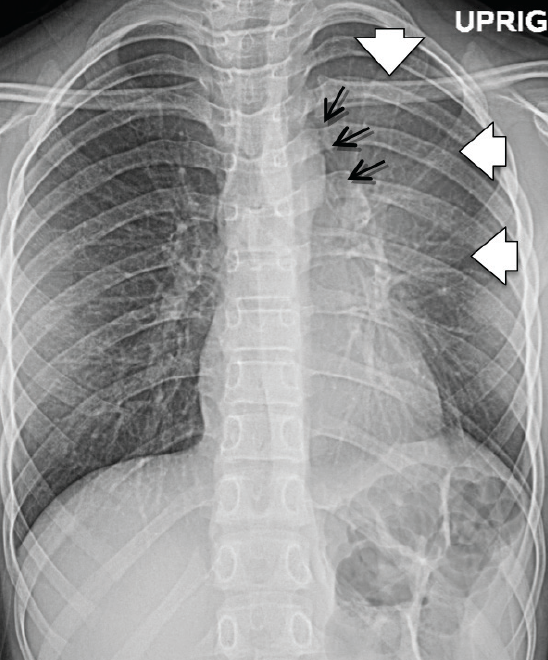 Figure 2. Plain radiograph of the chest of a 9-year-old girl with fever and cough. It demonstrates the luftsichel sign (black arrows) and the adjacent collapsed upper lobe appearing as a veil-like opacity (white arrows).

Left upper lobe atelectasis is an uncommon isolated finding in children, and it can be difficult to identify on imaging. Near-complete or complete collapse may demonstrate the luftsichel sign.1 The term luftsichel is derived from the German words luft, for air, and sichel, for sickle. It refers to the crescent-shaped lucency that is seen surrounding the aortic knob on radiographs as a result of compensatory hyperexpansion of the left lower lobe (Figure 2).1 The adjacent collapsed left upper lobe forms the lateral edge of the crescent and may appear as a veil-like opacity projecting over the upper and mid left hemithorax (Figure 3). The mediastinal and cardiac borders may be obscured by this opacity.

Additional findings may include elevation of the left hemidiaphragm, crowding of the left-sided ribs, and leftward mediastinal shift. On lateral projection, the collapsed upper lobe appears as an anterior opacity, bounded by the edge of the major fissure.

Atelectasis is common in children due to the decreased elastic recoil of their alveoli, as well as fewer collateral ventilation channels (intra-alveolar and bronchiole-alveolar pores) that allow for ventilation distal to an obstructed airway.2 The most common types of atelectasis in children are obstructive atelectasis, caused by complete or partial large airway obstruction, and compressive atelectasis due to parenchymal compression by intrathoracic or extrathoracic masses.2

Mucus plugging is a common cause of obstructive atelectasis. An example is the “right middle lobe syndrome” observed in patients with asthma, wherein mucus plugs and hyperinflation of surrounding lobes cause right middle lobe atelectasis.3 A trial of an inhaled bronchodilator may help alleviate symptoms by improving secretion clearance, but obstruction as the cause of atelectasis must always be considered.2

Pneumonia also can cause atelectasis. While certain radiographic features are more common in bacterial pneumonias, imaging alone does not reliably differentiate bacterial, viral, and atypical etiologies.4 While our patient’s persistent fever could have been caused by pneumonia, her well appearance and lack of other upper respiratory symptoms clinically argued against a bacterial etiology. 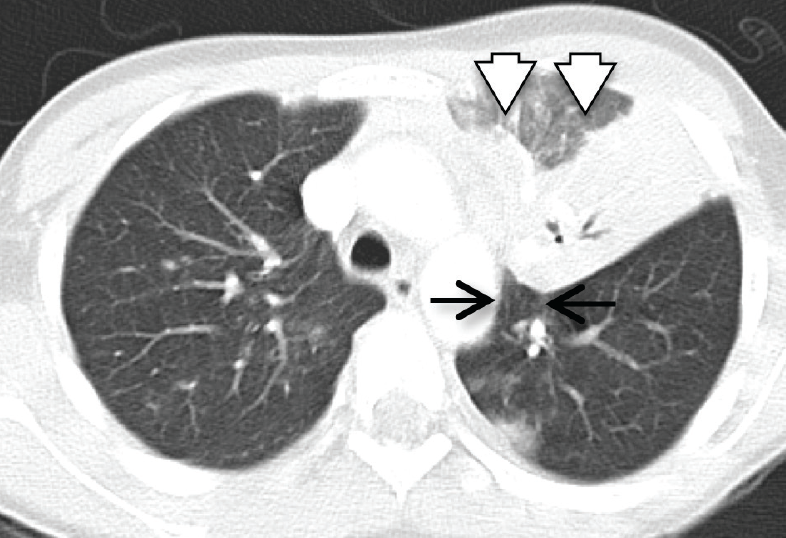 Symptoms of an atypical pneumonia, such as mycoplasma pneumonia, are more variable and can include cough, dyspnea, and sputum production, as well as extrapulmonary manifestations.5-8 Fever typically is present. Children younger than age 5 years present with coryza and wheezing, while older children are more likely to develop bronchopneumonia.9 Radiographic features commonly include focal interstitial changes.10 In one prospective case series of 120 children, atelectasis was found in 29% of chest radiographs.10

Obstruction from a foreign body or compression from a mass also must be considered. While aspiration is lesson common in the older child, smaller objects such as nuts or pills are possible causes of foreign body obstruction. Foreign bodies lodged in smaller airways may cause secondary infection with fever, malaise, and cough.2 Bronchoscopy can be both diagnostic and therapeutic, allowing evaluation of the patency of airways and possibly the removal of sources of obstruction.