A 7-Year-Old Girl With Right Lower Abdominal Pain: What's the Cause?

Jamey Hourigan, DO; Alan Lucerna, DO; and James Espinosa, MD

A 7-year-old girl presented to the emergency department (ED) with her father for evaluation of right lower quadrant abdominal pain that had begun 2 hours before arrival and that had been associated with nausea and 2 episodes of nonbloody emesis. While the patient was unable to fully describe the pain, she did point to the McBurney point as its source. The girl’s father says she had reported similar pain 2 days prior, but because it had resolved on its own, they did not seek medical attention. The patient denied any trauma, recent illness, hospitalization, or urinary symptoms.

Physical examination revealed a healthy-appearing, afebrile patient with mild to moderate pain on palpation of the right lower quadrant. Because of the location of her pain, and only after a discussion with her father about the risks and benefits, a computed tomography (CT) scan of the abdomen and pelvis was performed with oral and intravenous contrast. The patient was given 1 mg of morphine to help alleviate her discomfort. 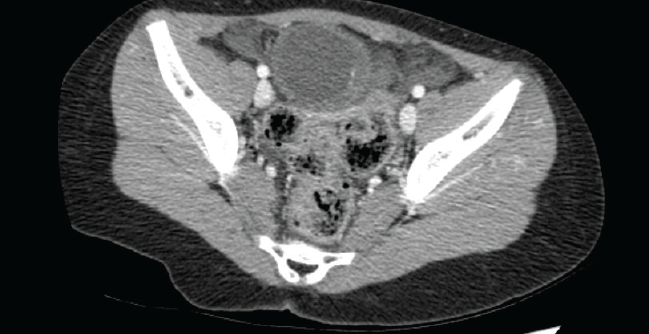 Results of a complete blood count were significant only for a white blood cell (WBC) count of 13,700/µL with 75.7% neutrophils. Results of a basic metabolic panel were notable only for a hypokalemia, with a potassium level of 2.9 mEq/L. Urinalysis results showed trace WBCs on leukocyte esterase testing, but no nitrites or blood were detected. Subsequent microscopy revealed only 1 to 2 WBCs per high-power field.

Results of the abdominal and pelvic CT scans are shown in Figures 1 and 2. 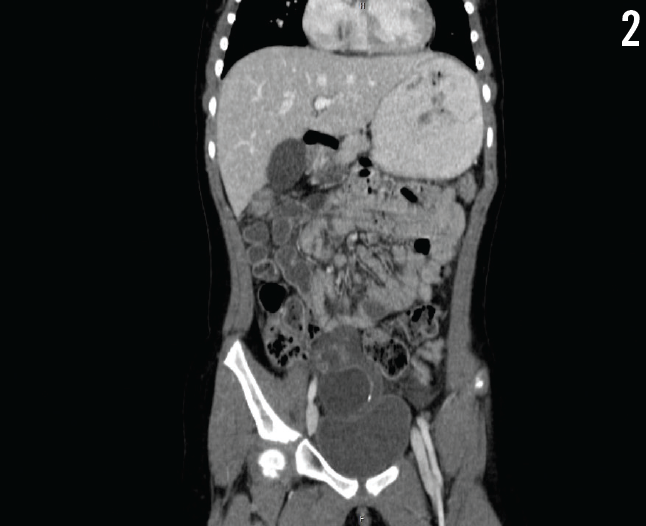 What is the cause of this patient’s abdominal pain? 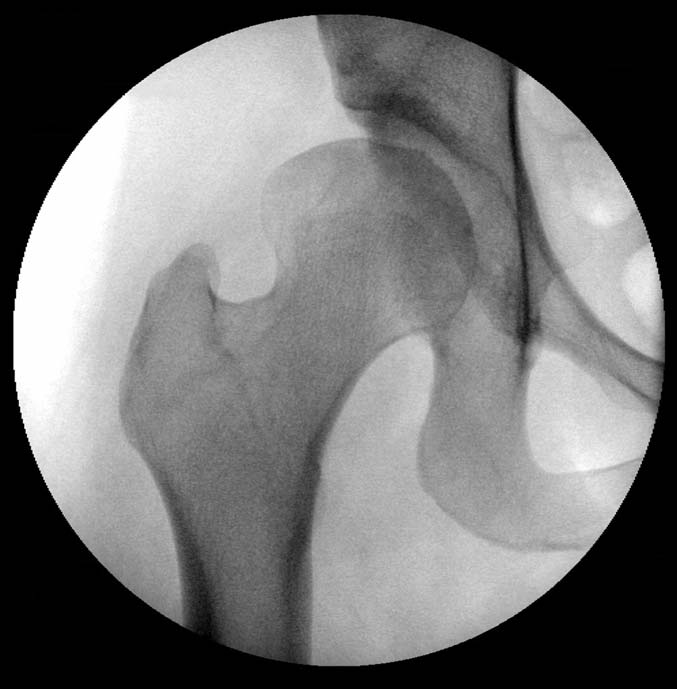 While the CT scan of the abdomen and pelvis revealed a normal appendix, it also showed a 5-cm cystic and solid-appearing lesion in the right paramidline pelvis, which the radiologist believed to most likely represent an exophytic ovarian lesion, possibly a neoplasm, with a consideration for superimposed torsion (Figures 1 and 2).

Since our institution did not have a pediatric gynecologic surgeon, the patient was transferred to a tertiary center where she underwent surgery. Intraoperatively, she was confirmed to have an ovarian torsion; the ovary could not be salvaged, resulting in a right oophorectomy.

Ovarian torsion (OT) is caused by rotation of an ovary at its pedicle, resulting in congestion of the venous, arterial, and lymphatic flow that if left untreated can lead to infarction.1 The cause of the torsion is unknown in half of cases, and a mass or cyst is thought to act as a lead point in the other half.2

OT has an estimated annual incidence of 4.9 cases per 100,000 females from 1 to 20 years of age.3 The mean age at diagnosis in the pediatric population in one study was 9.2 years, with 52% of those cases occurring in girls between 9 and 14 years of age.2 While OT is more common after menarche, the incidence rate has been shown to display a bimodal distribution corresponding with hormonal fluctuations, with peak incidences below the age of 1 year and again between 9 and 14 years of age.2 Even though OT is a rare diagnosis in premenarchal girls, misdiagnosis or a delay in diagnosis can lead to a loss of the ovary, fallopian tube, or both.4,5 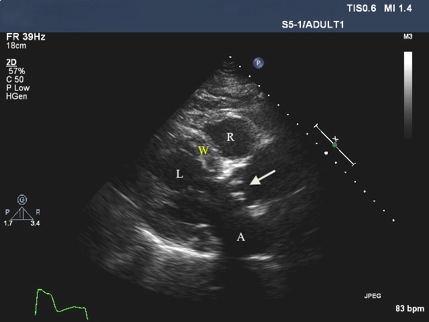 The most common symptoms on presentation are pain (most often sudden-onset and severe), nausea, and vomiting.6 OT most commonly presents with right-sided pain, with a ratio of 3:2.7 Given the low incidence, the nonspecific symptoms, the often atypical presentations associated with OT, and children’s inability to describe their symptoms, its diagnosis often is delayed in favor of other common conditions such as constipation, urinary tract infection, ruptured ovarian cyst, pelvic inflammatory disease, appendicitis, and gastroenteritis.8-11

Ultrasonography is the modality of choice in female patients with suspected OT, with the most common abnormal finding being an enlarged ovary.12,13 The addition of Doppler has not been proven to completely rule out torsion; while lack of blood flow confirms the diagnosis, torsed ovaries may continue to display flow.14 The use of CT has been described in few cases, and it generally is reserved as an adjunct to ultrasonography or when other possible diagnoses such as appendicitis must be pursued.15 Given the atypical presentation of many cases of OT, patients often may undergo CT and other tests that can further delay their diagnosis.

The mainstay of treatment of OT is emergent laparoscopy with detorsion.4 While oophorectomy previously had been recommended for varices that appear necrotic on exploratory laparoscopy, it has been shown that they too can be treated with detorsion.16 Higher salvage rates have been reported with early surgical intervention (within 36 hours).17,18 Given that delays in diagnosis are common, the rate of successful ovarian salvage historically has been low for girls with OT, with a reported 50% to 91% rate of oophorectomy.19

Jamey Hourigan, DO, is a fourth-year emergency medicine resident at the Rowan University School of Osteopathic Medicine in Stratford, New Jersey.

James Espinosa, MD, is an assistant professor in the Department of Emergency Medicine at Rowan University School of Osteopathic Medicine and an attending physician at Kennedy University Hospital.