A 68-Year-Old Man With Hematochezia: What Is the Best Approach to Management?

A 68-year-old man was awakened the previous night with a strong urge to move his bowels, which was an uncommon situation for him. When he did so, he had a diarrheal, loose bowel movement with maroon and bright red blood. This was repeated 2 more times during the night, prompting him to present to urgent care for evaluation.

At presentation, he was afebrile, with a reclining pulse rate of 92 beats/min and a blood pressure of 108/68 mm Hg. Postural testing was not performed. He had no abdominal tenderness and had good bowel sounds. Liquid maroon stool was present in the rectum. No hemorrhoids were seen.

His history was positive for type 2 diabetes, controlled with oral agents. He also had sustained an anterior acute myocardial infarction 11 months ago and had undergone stenting of his right coronary artery. He has been on daily metoprolol and 81 mg aspirin since then.

Electrocardiography (ECG) revealed a remote anterior infarction with no new acute injury currents, findings that were essentially unchanged from his last ECG. Troponin levels were normal. He had a random blood glucose level of 138 mg/dL, a blood urea nitrogen (BUN) level of 33 mg/dL, and a creatinine level of 1.9 mg/dL—again, findings similar to his most recent test results 3 months ago. His hemoglobin (Hb) level was 11.9 g/dL with a mean corpuscular volume (MCV) of 90 µm3, compared with 14.9 g/dL with an MCV of 91 µm3 3 months ago.

He received 2 L of crystalloid fluids, and after 4 hours, his pulse rate was 84 beats/min and his blood pressure was 116/78 mm Hg. He had no further bowel movements. Repeated blood studies revealed normal troponin levels, a creatinine level of 1.8 mg/dL, a BUN level of 30 mg/dL, and an Hb level of 9.9 g/dL.

Answer: C is the correct statement

This man’s case is quite typical of hematochezia—the passage of bright red or maroon blood per rectum, in contrast to melena, which is black tarry stool. Hematochezia denotes colonic bleeding, whereas melena arises from an upper gastrointestinal (GI) tract source. Among all cases of GI hemorrhage, the hospital admission rate for upper GI bleeds is roughly twice the rate for lower GI bleeds, so the reported 30% to 40% hospitalization rate of lower GI bleeding is a significant number indeed.1,2

This patient’s history, physical examination findings, and laboratory test results help structure the initial differential diagnosis. There was no accompanying abdominal pain or prior diarrhea to suggest inflammatory, infectious, or ischemic colitis. There had been no weight loss or change in bowel habit, and Hb and MCV results were normal now and shortly before the episode of hematochezia, making colonic neoplasm less likely. No hemorrhoids were seen on physical examination. Thus, diverticular bleeding—the most common cause of bright red blood per rectum in most studies (30% to 65%)—appears to be the most likely cause here.1,2

As in any serious GI hemorrhage situation, initial management with crystalloid fluids and, if needed, RBC transfusion is in order to stabilize the patient’s vital signs and to monitor for ongoing bleeding. Once the patient’s condition has been stabilized, diagnostic procedures can proceed to define and potentially treat the cause of the lower GI bleeding. The literature on this is surprisingly observational, quite in contrast to that of upper GI bleeds, which has many more larger, randomized—and thus more powerful—studies.1,2

Nevertheless, specialty society guidelines agree that a proper colonoscopy is the initial procedure of choice.3,4 The word proper is taken to mean adequate preparation of the colon, which involves large-volume enemas and nothing by mouth for at least 8 hours to enhance visualization to aid in diagnosis and treatment. As discussed below, a variety of radiologic techniques also are available but either are less useful (technetium-labeled RBC scintigraphy) or are reserved for the approximately 30% of cases where the bleeding is continuing or is uncontrolled (computed tomography angiography [CTA] for location and angiography for therapy).1,3 Colonoscopy has the advantage not only of visualization for diagnosis, but also of the use of endoscopic methods for hemostasis, such as epinephrine injection, lasers, heater probes, and mechanical clipping/banding techniques when stigmata of recent bleeding (ie, visible vessels, adherent clot, or active bleeding) are found.1,4 (Again, note the similarity to the endoscopic management of upper GI bleeding.) In any event, bleeding will stop spontaneously in 70% to 80% of cases2; when bleeding does not stop on its own, endoscopic maneuvers will accomplish hemostasis in more than 90% of cases, with rebleeding occurring in approximately 20% of cases (which requires another therapeutic pathway). Thus, Answer C, a well-prepared colonoscopy, is absolutely appropriate here.

The 3 other answers cover initial stabilization protocols, other diagnostic techniques, and the management of the concomitant antithrombotic medications taken by so many patients in the demographic group that is most at risk for lower GI bleeding.

Management strategies for lower GI bleeding, somewhat surprisingly, have been developed based on data from strong randomized trials and meta-analyses of upper GI bleeding.1-3 Initial crystalloid fluid infusions, hemoglobin monitoring, and transfusions for Hb levels below 7 g/dL in most patients and below 9 g/dL in patients with a history of ischemic cardiovascular disease are suggested.5 Our patient had a documented acute myocardial infarction with stent placement 11 months ago, so an Hb level of 9 g/dL should be the transfusion trigger, not 7 g/dL, making Answer D incorrect.

Answer B relates to the management of antithrombotics in patients with lower GI bleeding. Again, the data used to guide the approach to antithrombotic therapy do not come from trials of lower GI bleeding cases but rather have been extrapolated from studies of upper GI bleeding. Nonetheless, the available guidelines respect the significant risk of serious cardiovascular events and death when antithrombotics are withheld from such patients, such that low-dose aspirin should be continued without interruption in bona fide secondary prophylaxis situations such as the presented patient’s case. However, in cases of primary prophylaxis, the risk of cardiovascular events is far lower, with less morbidity and mortality than that of recurrent bleeding, such that aspirin should be stopped and not continued thereafter.6 Thus, Answer B is incorrect in our patient’s case.

Technetium-labeled RBC scintigraphy is one of the radiologic maneuvers that have been tried to enhance the diagnostic accuracy and potential therapeutics in cases of lower GI bleeding. In fact, it is the weakest maneuvers, with its general usefulness a subject of debate.1 Most studies have demonstrated that CTA is far more useful in localizing a bleeding site, often followed by angiography for definitive localization and therapy in cases where bleeding is ongoing and colonoscopy cannot be performed. Our patient’s bleeding appears to have stopped, he is hemodynamically stable, and for now he seems to be one of the 70% to 80% of patients who stop bleeding spontaneously and do well. There is no need to perform the least-helpful of the radiologic maneuvers at this time, and Answer A is therefore incorrect on multiple counts.

The patient’s nadir hemoglobin level was above 9 g/dL, so resuscitation was with crystalloid fluids rather than transfusion. His vital signs remained stable with this regimen, and his ECG results and troponin levels did not indicate new cardiac ischemia. Colonoscopy was performed after good preparation, the findings of which demonstrated diverticula but no active bleeding or stigmata of recent bleeding amenable to endoscopic treatment. His condition remained stable, and he was discharged on hospital day 4. His daily low-dose aspirin regimen was continued.

At a 3-month follow-up visit, he was doing well. His Hb level had increased to 12.3 g/dL, and no further bleeding had occurred. 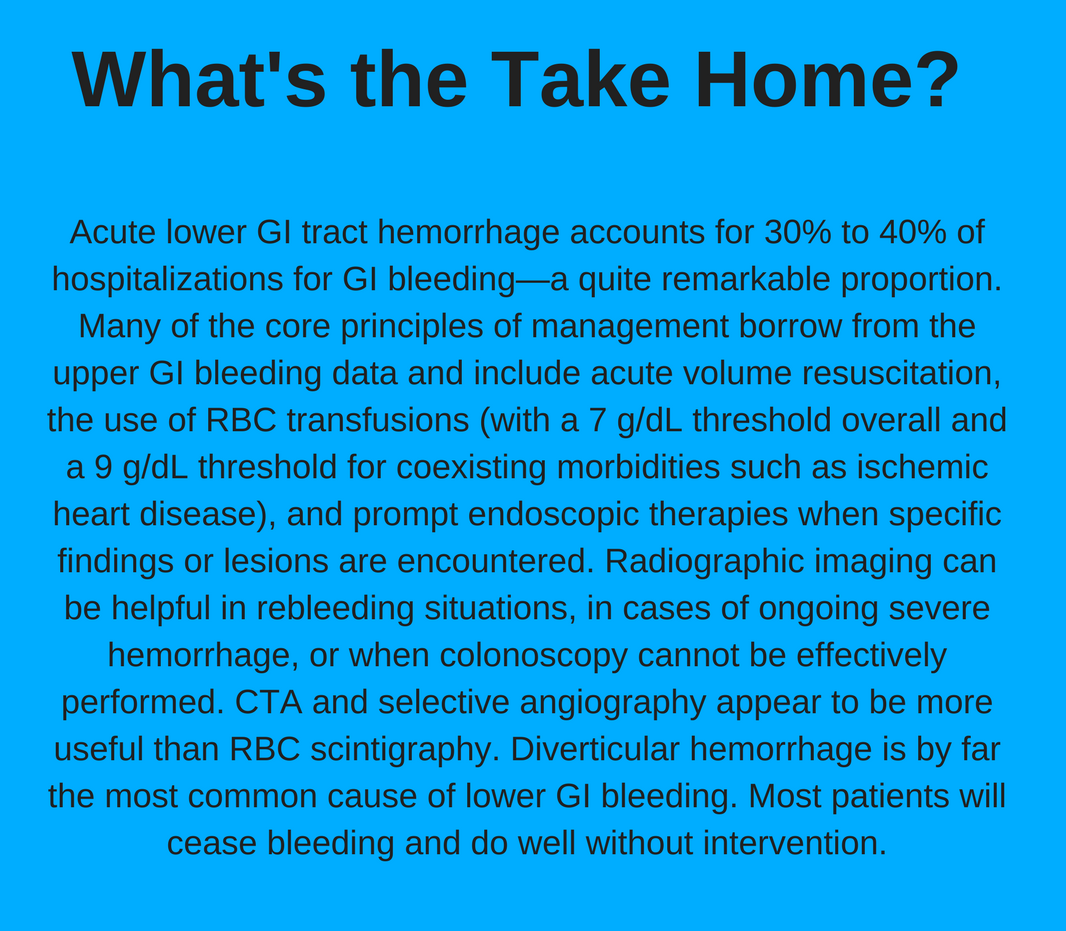