In the previous What’s the “Take-Home”? article,1 a 63-year-old woman presented for evaluation of possible liver disease. Approximately 8 months previously, the results of a biochemistry profile had shown her transaminase levels to be elevated to approximately 2 to 3 times the normal reference values.

Another thorough history and physical examination revealed a several-year history of statin use and that she has consumed at least 3 glasses of red wine daily for many years. She was obese, with a body mass index (BMI) of 30 kg/m2. There was a question of a firm, nontender liver edge, but her obesity rendered the examination difficult. Laboratory tests revealed not only elevated transaminase levels, but also borderline-high glucose and hemoglobin A1c levels. Results of a lipid panel were normal. The statin was stopped, and she was advised to lose weight, cease all alcohol intake, and repeat a biochemistry panel.

At her 6-month follow-up visit, biochemistry tests revealed persistent elevation of transaminases 2 to 3 times above normal, with a low-normal serum albumin level of 3.6 g/dL. Her weight had not changed, nor had her alcohol consumption. Abdominal ultrasonography revealed hepatomegaly with steatohepatitis and early cirrhotic changes.

After having been lost to follow-up for approximately a year, she presented again after her family had noted significant deterioration of her condition. She had not adhered to the suggested lifestyle changes, specifically dietary discretion, weight control, and alcohol cessation. The family noted that she had gained weight, with a notable increase in abdominal girth, and that she more frequently seemed somnolent and/or confused.

Physical examination now revealed her BMI to be 33 kg/m2. Her blood pressure was 128/78 mm Hg. Areas of spider telangiectasia had appeared on her shoulders and upper trunk. Even with her generous BMI, moderate ascites could be appreciated on abdominal examination, and the liver was nonpalpable. She seemed somewhat somnolent, with a poor ability to maintain attention and focus, but no asterixis was appreciated.

A new set of laboratory test results revealed that the patient’s serum albumin level was low at 2.8 g/dL, the transaminase levels were again elevated to 2 to 4 times above normal, and the prothrombin time was prolonged to 15.6 seconds (reference value, < 12 seconds). Ultrasonography demonstrated that the liver was contracted and was now nodular in texture. Ascites was confirmed. An endoscopic examination was scheduled, the results of which revealed the presence of moderate esophageal and gastric varices without active bleeding.

Answer: B is the least appropriate strategy

This patient’s nonadherence, especially the continued heavy alcohol intake, has resulted in the evolution to frank cirrhosis, which has now crossed the clinically serious landmarks of the development of ascites, hepatic encephalopathy, and varices. Her risk of death is now 15% within 1 year and 44% within 5 years, with an ongoing annual incidence of 5% of developing HCC.2 This discussion of the patient’s decompensated phase of cirrhosis focuses on management.

Answer A refers to the use of β-blockers to lower portal pressure and, subsequently, the morbidity of variceal hemorrhage. The literature features extensive and excellent data on their use for primary prophylaxis (ie, varices present but have not bled, which is likely the situation in this patient’s case) and secondary prophylaxis (ie, varices present and have bled).3,4 In many situations, β-blockers have demonstrated efficacy in decreasing variceal bleeding, but the optimal effect on survival seems best when they are given once moderate to large varices have developed, with or without bleeding, but before refractory ascites, persistent hypotension, or other end-stage complications have occurred, in which case any survival benefit disappears.5 Our patient has developed moderate varices but has retained normotensive blood pressure and thus is a good candidate for β-blockers as primary prophylaxis, making Answer A a correct statement.

Answer C relates to management of another complication of cirrhosis: ascites. Older literature and lore about the amount of ascites that could be safely removed, either by diuretics and fluid restriction or by paracentesis, generated much discussion, debate, and management formulas. Good studies and new knowledge have confirmed the need for, safety of, and important aspects of ascites management as follows: Prompt paracentesis is useful and safe in all patients with new-onset ascites (as in our patient’s case) to initiate the diuresis process. Up to 5 L is essentially always safe in normotensive patients, and a regimen of diuretics and fluid restriction can then be initiated with better results. In cases in which clinical deterioration has occurred (eg, encephalopathy, fever, leukocytosis, pain), paracentesis can demonstrate bloody fluid, often indicating HCC, or a polymorphonuclear leukocyte (PMN) count of greater than 250/µL, indicating spontaneous bacterial peritonitis.2,6 Our patient’s case may even fit both criteria, so Answer C is a true statement here.

Answer D amplifies the current means of surveillance for the dreaded complication of HCC. Current guidelines recommend imaging and α-fetoprotein measurements every 6 months once cirrhosis has been confirmed. Finding HCC in an early stage is associated with superior survivorship in its own right. Additionally, the finding of limited HCC can impact patients’ placement on the waiting list for orthotopic liver transplantation, so Answer D is a correct approach to our patient’s case.

Finally, Answer B relates to the difficulty of pain management in patients with cirrhosis. Many if not all pain medications present difficult theoretical and real-world issues in this population. NSAIDs have been shown to increase gastrointestinal (GI) tract bleeding as well as to precipitate acute kidney failure in patients with cirrhosis. Narcotics are problematic because their sedative properties often initiate or worsen hepatic encephalopathy.2 So, paradoxically, despite that acetaminophen overdose may be the most frequent cause of acute hepatic necrosis leading to death or transplantation,7 it has emerged as the safest alternative when used in a “safe” dosage range—usually defined in cirrhosis cases as less than 2 g/day. Thus, Answer B is the false, incorrect statement here. 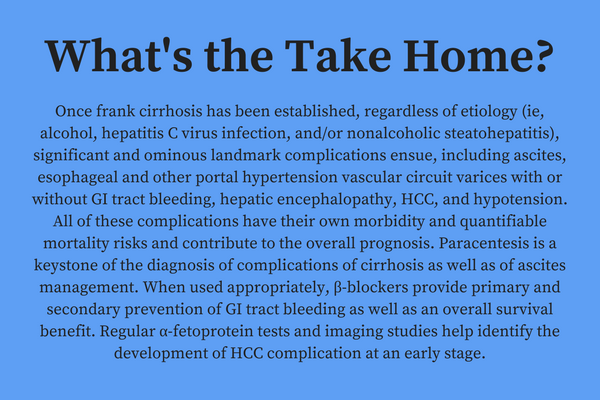 The patient was admitted for further treatment. Paracentesis yielded clear, bloodless fluid with a less than 250 PMNs/µL and a subsequent absence of bacterial growth. A total of 4500 mL of fluid was removed, and a diuretic and 2-g sodium diet were initiated. The initial α-fetoprotein level was normal. Several days of lactulose therapy resulted in marked improvement in mentation. The seriousness of the situation and the prognosis were again vigorously explained to the patient and her family.

At a 1-month outpatient follow-up visit, she had remained abstinent from alcohol and adherent to her medication regimen and restrictive diet. Her blood pressure was stable at 125/80 mm Hg, and no gross edema or ascites were present.