A 3-Year-Old Boy With a Spreading Leg Rash, Pain, and Swelling

A 3-year-old boy presented to the emergency department (ED) for the fourth time in 8 days, this time for left ankle and foot swelling and a rash spreading from his left foot and lower leg to his left buttock. Eight days before this visit, he had been seen in the ER for a fever. At that time, a diagnosis of otitis media had been made, antibiotics had been prescribed, and he had been discharged home. 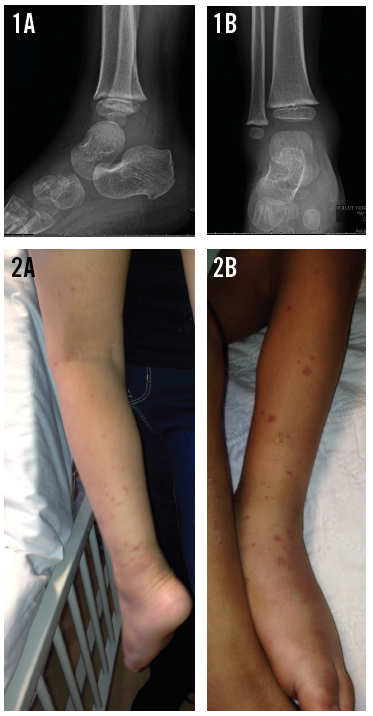 Two days later, he returned to the ER for right ankle pain that had begun after he had descended stairs at home. Radiographs of the patient’s right ankle showed soft tissue swelling but no fracture (Figures 1A and 1B). A preliminary diagnosis of right ankle sprain was made. Out of concern for a possible epiphyseal plate fracture, his ankle was splinted, and he was given ibuprofen for pain and discharged home.

At a follow-up visit the next day with his primary care provider, the boy’s mother reported that he had had loose stools with some blood. The primary care provider told the mother that the bleeding may have been an adverse effect of the ibuprofen and advised her to monitor him closely.

The next day, the boy was seen again in the ED, this time for penile pain without discharge; while there, he also developed abdominal pain. He was diagnosed with balanitis, and again he was discharged home with supportive treatment.

Three days later, he presented for a fourth ED visit with marked swelling and ecchymosis of the left dorsal foot, along with a nonblanching, circular, palpable rash on his left foot that had spread to the lower left leg and left posterior thigh to the left buttock. The rash was not excoriated or pustular. His right lower extremity showed moderate ecchymosis and swelling (Figures 2A and 2B). He also reported having bilateral ankle joint pain, which prevented ambulation, and intermittent abdominal pain. Examination of the lower extremities showed severe tenderness to palpation.

What is causing this boy’s rash and pain?

Based on his clinical presentation, the boy received a diagnosis of Henoch-Schönlein purpura (HSP).

Upon admission, he received supportive therapy with oral ibuprofen, acetaminophen, and ondansetron as needed. Two days after being admitted, the patient was doing well, was able to ambulate, and was in no apparent pain or distress. He was discharged home with instructions to follow up with his primary care provider in 2 days. 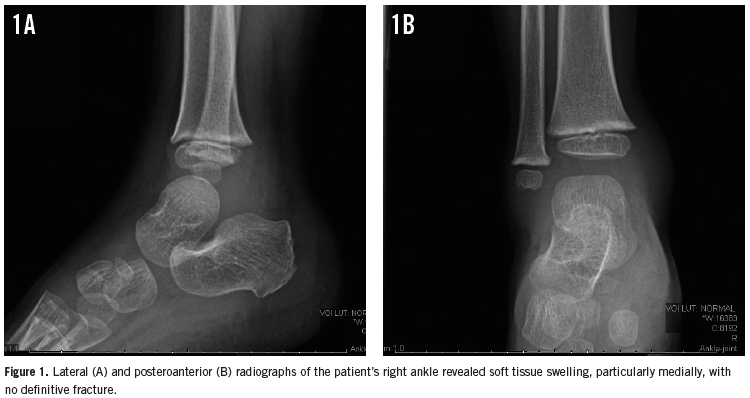 HSP, also known as IgA vasculitis, is the most common form of childhood systemic vasculitis. Approximately 90% of HSP cases occur in children between the ages of 3 and 10 years old,with the U.S. incidence being approximately 10 to 22 cases per 100,000 per year.1

The disease is more common in boys, with a male to female ratio of 1.2:1 to 1.8:1. HSP more commonly occurs in the fall, winter, and spring months. Approximately 50% of cases are preceded by an upper respiratory infection, especially with Streptococcus species.1

The etiology of HSP is unknown, although numerous triggers have been documented. Its pathogenesis has been determined to be immune-mediated vasculitis of IgA deposition. Genetic, immunologic, and environmental factors also are involved in the development of HSP.1

HSP in children is characterized by 4 clinical manifestations1: palpable purpura (100% of cases) with no coagulopathy or thrombocytopenia; arthralgia (75% of cases); abdominal pain (60% to 65% of cases) accompanied by gastrointestinal (GI) bleeding in 30% of these patients; and renal disease (40% to 50% of cases). 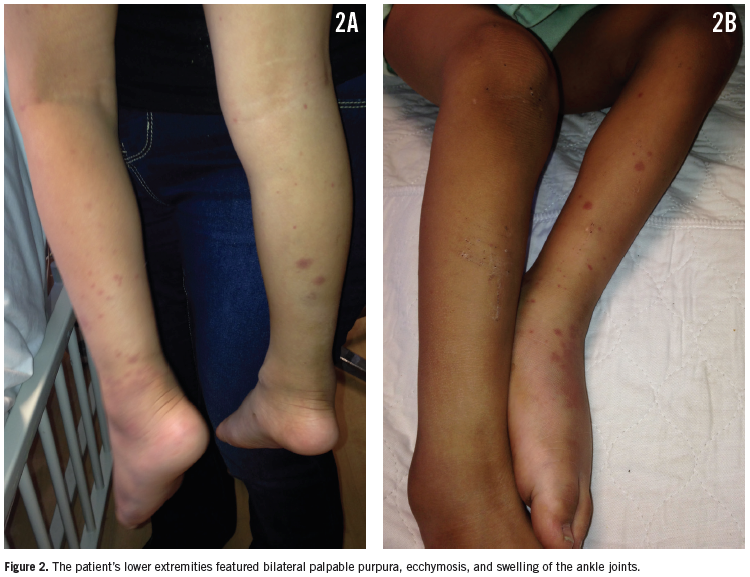 Purpura is the presenting symptom in the majority (approximately 70% to 75%) of HSP cases.3-5 However, in HSP cases with a partial or unusual presentation—especially if purpura is not the presenting symptom or is not present at all—the diagnosis is more difficult and sometimes can be missed completely. Scrotal tenderness and swelling is another possible symptom of HSP.

GI hemorrhage, small bowel ischemia, necrosis and perforation, and intussusception are important possible complications. Our patient had a suspected GI bleed, which required careful inpatient monitoring. Other possible complications of HSP may involve the renal system, the central and peripheral nervous systems, the respiratory system, and the ocular system. Our patient initially presented with arthralgia, then abdominal pain and GI bleeding, before the characteristic purpuric rash appeared. This unusual clinical course delayed the correct diagnosis of HSP.

The diagnosis of HSP typically is based on the patient’s clinical presentation. It can be confirmed with skin and renal biopsies, with skin biopsy showing the characteristic leukocytoclastic vasculitis. Renal biopsy is a more invasive procedure that is done only when the diagnosis is uncertain and/or if a patient has severe renal symptoms.1

HSP is a self-limiting disease in most cases, and treatment is mostly supportive and symptomatic. Targeted treatment may be initiated to improve or prevent GI and renal complications.

The short- and long-term prognosis is excellent in most cases of HSP. Morbidity most often is related to GI complications in the initial phase of disease and renal complications in the long term. As many as one-third of patients experience recurrence, typically within 4 months of the initial presenting symptom. An increased risk of recurrence is associated with more severe cases.1

Nida Blankas-Hernaez, MD, is affiliated with the Pediatric Faculty Foundation at Ann and Robert H. Lurie Children’s Hospital of Chicago. She is on staff at Advocate Lutheran General Hospital in Park Ridge, Illinois; is chair of the Pediatrics Department at Norwegian American Hospital in Chicago, Illinois; and is pediatric core director at Ross University School of Medicine.