A 22-Month-Old Child With an Atypical Enteroviral Exanthem

A 22-month-old boy was sent to the emergency department (ED) by his pediatrician for evaluation of a rash on his arms and legs. The boy’s parents reported that 5 days before the ED visit, he developed “bumps” bilaterally on the flexor surfaces of the knees and legs and the extensor surfaces of the upper arms and elbows. At onset of the rash, he also had a low-grade fever for 1 day and small papular lesions around the mouth. No vesicles or pustules were noted.

He was seen by his pediatrician, who suspected that the rash was a coxsackievirus exanthem. The pediatrician also diagnosed otitis media and prescribed oral amoxicillin-clavulanate, which the boy had been taking. 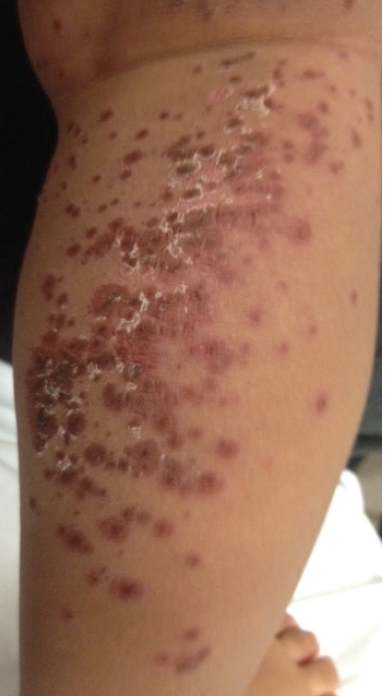 The skin lesions gradually became dark and crusted, and a few new lesions continued to appear on the extremities. The child had a normal appetite, diet, and activity level throughout the course of the rash. No pruritus or discomfort was noted.

His past medical history was unremarkable except for mild eczema, and his immunizations were up to date. He was known to have had recent contact with hand-foot-and-mouth disease at the daycare facility that he attended.

On examination in the ED, the boy was well appearing, happy, and playful. He was eating a snack and appeared to be in no discomfort. He was afebrile, and vital signs were within normal ranges.

Physical examination findings were remarkable only for the skin lesions. He had multiple clusters of crusted, hemorrhagic papules on the flexor surfaces of both lower legs from below the buttocks, on the extensor surfaces of both arms from the mid-upper arms, and a 2-cm area on the left-lower lateral abdominal wall. There was no involvement of the palms and soles, the neck, the buttocks, or the inguinal or axillary areas. No oral lesions were seen, but a few small, 1-mm, erythematous papules were seen around the angles of the mouth. Two or three more recent papulovesicular 1-mm lesions were seen scattered on the left ankle and right wrist. 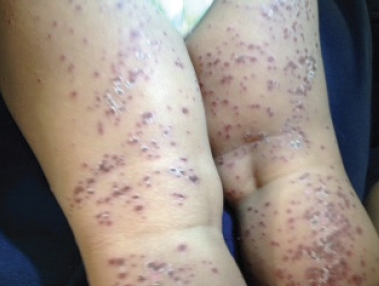 The rash was nontender. There were no petechiae or purpuric lesions and no pustules or honey-colored crusts. There were no deep or punched-out ulcers and no target lesions. No mucosal or nail involvement was noted.

A complete blood count showed a white blood cell count of 5,700/µL with 18% segmented neutrophils and 59% lymphocytes, a hemoglobin of 12.3 g/dL, and a platelet count of 377 × 103 µL. A swab from the lesions was sent for viral polymerase chain reaction (PCR) testing.

The boy was discharged home with a presumptive diagnosis of a viral exanthem. The PCR test results later were positive for enterovirus and negative for herpes simplex virus and varicella-zoster virus.

At a follow-up visit with his pediatrician a few weeks after discharge, the boy’s rash had resolved, but with residual hyperpigmentation of the affected areas.

Further subtyping of the enterovirus strain was not performed in our case. The patient did not have significant fever, pain, or mucosal involvement resulting in dehydration. He did not require hospitalization, and he had an uneventful recovery.

Dr Pittalwala is a pediatric hospitalist at the Children’s Hospital of Philadelphia Care Network at Virtua in Voorhees, New Jersey.