A 19-month-old girl was brought into the orthopedic clinic by her parents for a chief concern of limping on her right leg for 9 days. The parents reported that the girl had nasal congestion and rhinorrhea for 4 days before a sudden onset of limping. The parents denied any history of trauma, fever, chills, joint swelling, weight loss, or rash.

Early in the course of her illness, the girl saw her pediatrician, who did a complete blood count (CBC), the results of which were unremarkable. She had radiographs of her pelvis, right knee, tibia, and fibula during that time; the parents reported that the results were normal. She received a diagnosis of toxic synovitis. The parents had been giving her ibuprofen on-and-off for the last 5 days, which had not helped; in fact, her limping had worsened.

Her immunizations were up to date. Her family history and surgical history were unremarkable. On physical examination, her temperature was 36.8°C, pulse was 116 beats/min, respiratory rate was 22 breaths/min, blood pressure was 92/58 mm Hg, and oxygen saturation was 100% on room air. She was not in distress. She had an obvious limping of her right leg with walking and running. She had slight discomfort with passive abduction of her right hip. The rest of her physical examination findings were within normal limits. C-reactive protein (CRP), erythrocyte sedimentation rate (ESR), and repeat CBC results in the orthopedic clinic were normal.

Repeat radiographs of the right knee joint, tibia, and fibula in the orthopedic clinic were unremarkable, but a pelvic radiograph showed a small lytic area with irregularity in the right proximal medial femur (Figure 1).

Magnetic resonance imaging (MRI) of the pelvis without contrast showed a small right hip joint effusion and a right femoral metaphysis defect, which extended into the growth plate (Figure 2). 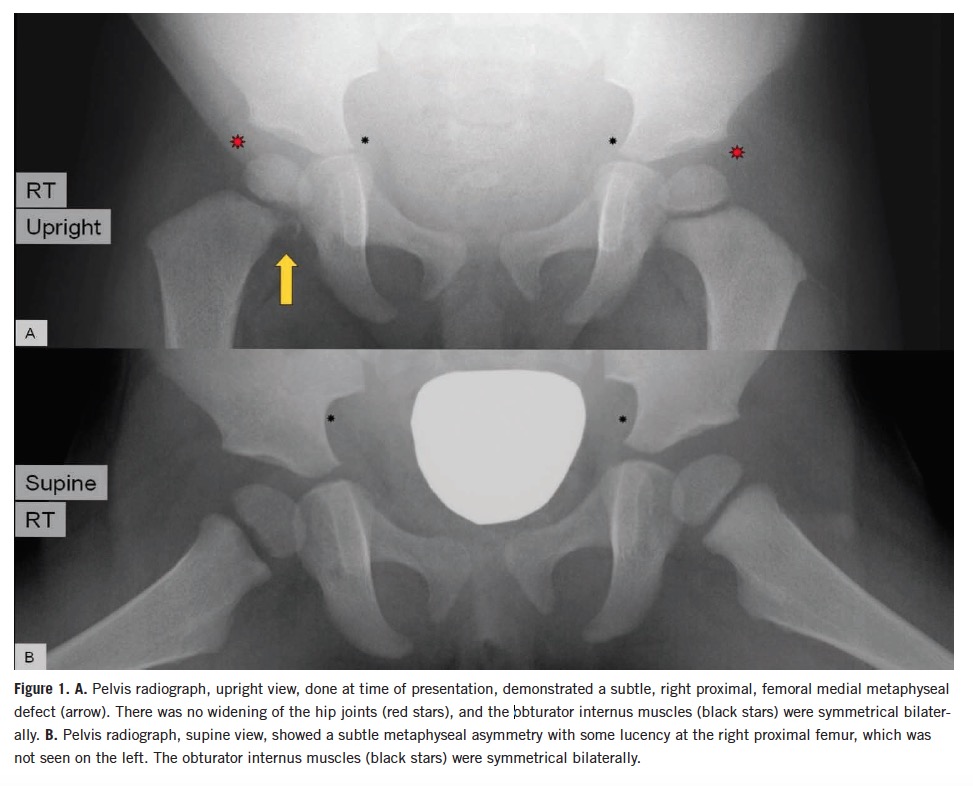 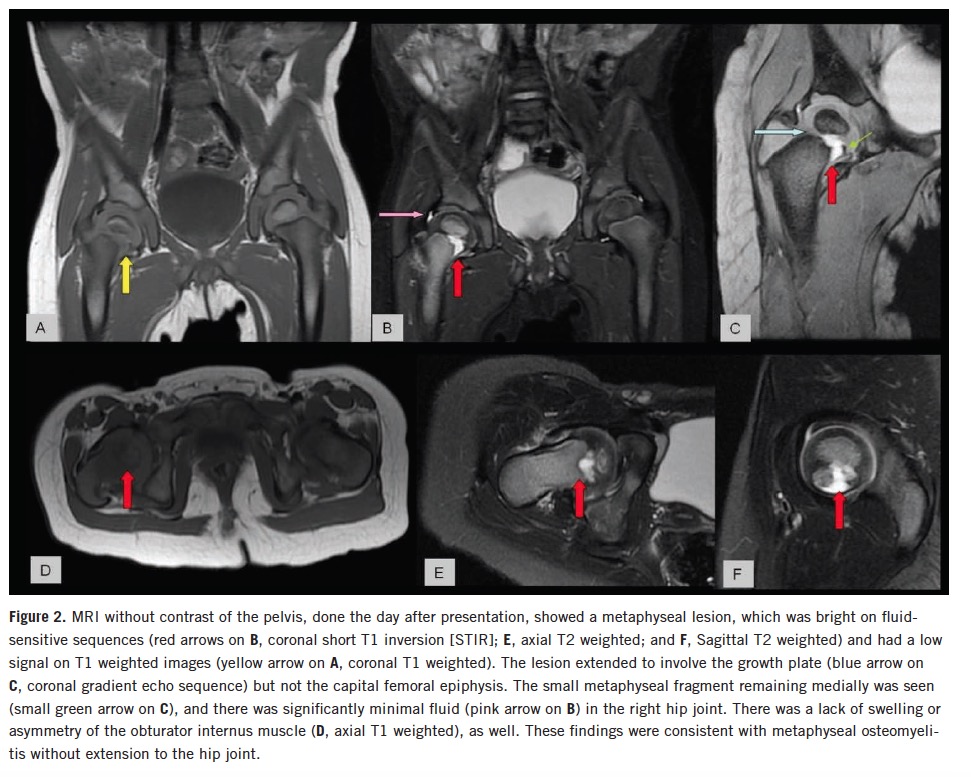 Radiographs of the pelvis at 2, 4, and 10 months (Figures 3, 4, and 5, respectively) showed healing osteomyelitis of the proximal right femur and changes that were concerning for early physeal closure at the right hip joint. Continued radiographic follow-up was suggested at that time. 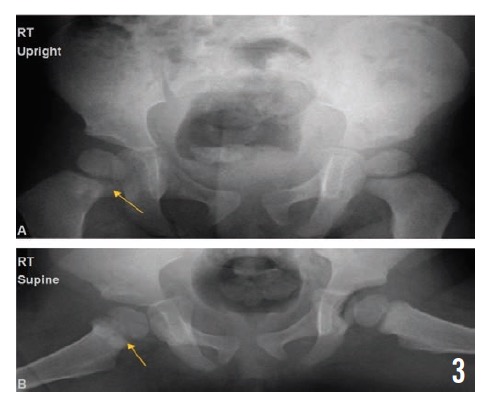 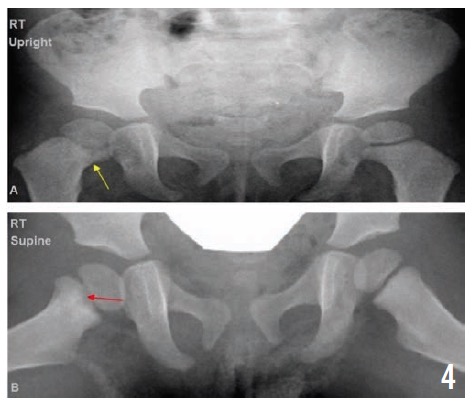 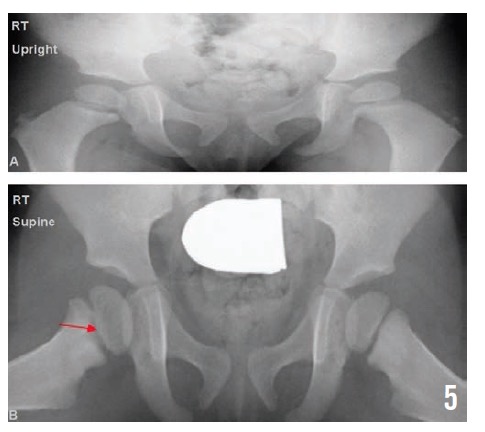 K kingae was first identified as a new species by Elizabeth King in 1960. In 1968, Henriksen and Bøvre published a full description of the organism and designated it Moraxella kingii of the family Neisseriaceae. In 1976, the organism was allocated to a new genus, Kingella, after further work by Henriksen and Bøvre characterized its distinctive genetic and biochemical properties.1

K kingae is a fastidious, nonmotile, nonencapsulated, facultative anaerobic, β-hemolytic, Gram-negative coccobacillus that belongs to the HACEK group of organisms (Haemophilus, Actinobacillus, Cardiobacterium, Eikenella and Kingella).2,3 It appears as pairs or short chains of plump bacilli with tapered ends. It tends to resist decolorization, which sometimes results in its misidentification as a Gram-positive organism.2,3

K kingae disease is diagnosed most commonly in young children. In previously healthy children, more than 95% of K kingae infections are diagnosed in children between the ages of 6 and 36 months.4 In contrast, older children and adults with K kingae disease often have underlying chronic disease, an immunosuppressing condition, a malignancy, or a cardiac valve pathology.3-5 It is slightly more predominant in males than in females.4

K kingae colonizes the posterior pharynx of young children and is transmitted from child to child through close personal contact.3,6 The carriage rate was highest among children aged 6 months to 36 months, the same age range as the majority of children who develop invasive infections. Day care attendance increases the risk for colonization and transmission, and clusters of K kingae infections among day care center attendees have been reported.7,8

Patients with invasive K kingae infections frequently present with minimal or no constitutional symptoms. Fever is not present in all cases. The peripheral white blood cell count, CRP level, and ESR generally are mildly to moderately elevated but may be normal.3-5

Direct inoculation of clinical specimens into aerobic blood culture bottles, instead of direct plating of specimens on solid media, might improve recovery of K kingae.3,13 In recent years, the use of polymerase chain reaction–based assays has improved early detection of the bacteria.14,15

Despite the diagnostic delay, chronic osteomyelitis and orthopedic sequelae appear to be uncommon in K kingae osteomyelitis.3,16

K kingae almost always is highly susceptible to penicillins and cephalosporins, although resistance to penicillin, ampicillin, and oxacillin has been documented. With few exceptions, K kingae also is susceptible to aminoglycosides, macrolides, trimethoprim-sulfamethoxazole, tetracyclines, chloramphenicol, and fluoroquinolones. Resistance to clindamycin and vancomycin has been reported.5,12 Currently, no evidence-based recommendations are available on the antibiotic choice and optimal length of therapy for K kingae diseases. Clinical response and acute-phase reactants help guide the timing of the switch to oral antibiotics. Up to 6 weeks of antibiotic treatment generally is indicated for K kingae osteomyelitis.3

Our case was interesting in that the patient had an acute onset of limping without fever, along with normal levels of inflammatory markers, involvement of both the femoral metaphysis and the growth plate, and chronic osteomyelitis on bone biopsy.

A high index of clinical suspicion is required to diagnose K kingae osteomyelitis in children because of its indolent presentation and because recovery of the organism in culture is difficult. To maximize the recovery of K kingae, inoculation of synovial fluid or bone tissue specimens into blood culture bottles is strongly recommended.

The prognosis of children identified with osteomyelitis caused by K kingae is very good owing to the susceptibility of the organism to most antibiotics.

Amir Raza, PA-C, is a physician assistant in the Department of Pediatric Orthopedics at the University of Oklahoma Health Sciences Center in Oklahoma City.

Thomas R. Lewis, MD, is an assistant professor in the Department of Pediatric Orthopedics at the University of Oklahoma Health Sciences Center.

Sandeep G. Prabhu, MD, is a professor in the Department of Radiological Sciences at the University of Oklahoma Health Sciences Center.

Faridali G. Ramji, MD, is an associate professor in the Department of Radiological Sciences at the University of Oklahoma Health Sciences Center.