A 10-Year-Old Girl’s Intense Ankle Pain: What Do Radiographs Show?

A previously healthy 10-year-old girl presented to the emergency department (ED) for an ankle injury. She initially had injured her right ankle the previous week after having run into a wall and fallen with her right ankle twisted. The pain did not abate, so her grandmother took her to a walk-in urgent care facility. Radiographs of the right ankle were obtained there, and the results were reported as normal. She was diagnosed with an “ankle bruise” and told to follow up only if her pain did not improve.

Her ankle tenderness and swelling did show improvement until the day before presentation, when while playing volleyball she again twisted her ankle. Because of a recurrence of pain and swelling, her grandmother brought her to a pediatric ED for reevaluation.

At presentation, the girl rated her pain as a 9 of 10. She reported that the swelling had decreased since the day before, and she denied any bruising. She was unable to bear weight or ambulate due to ankle pain, and she was using crutches. Her grandmother denied any fevers, weight loss, myalgia, appetite changes, rashes, or other areas of joint inflammation in the girl.

On examination of her extremities, she exhibited point tenderness along her right medial malleolus and surrounding ankle in both the distal and proximal directions. No palpable mass, bony instability, or crepitus were noted in the ankle, and there was no appreciable edema around it. Her skin was warm, with no petechiae, purpura, or bruises. She demonstrated 2+ dorsalis pedis and posterior tibial pulses.

The patient experienced pain with inversion, eversion, flexion, and extension of her right foot. She would not bear weight or walk because of the pain.

Because of concerns for a possible fracture, radiographs of the right lower extremity were obtained and are shown here. 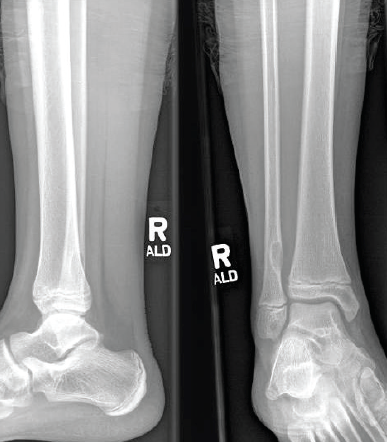 Based on the radiographs, what abnormal finding is present?

Lateral and anteroposterior radiographs of the right lower extremity revealed no evidence of a fracture or soft tissue swelling. They did, however, reveal an oval lucent lesion with a thin, mineralized, sclerotic rim, centered at the cortex of the distal right fibula along the medial aspect (arrows). The lesion, which measured 18 × 6 × 8 mm and appeared mildly expansile, likely represented a stable nonossifying fibroma (NOF) and was an incidental finding on the radiograph.

Her ankle was placed in an air splint, and she was given instructions for rest, intermittent ice, compression, and elevation. She was told to follow up with her pediatrician in 5 to 7 days if no improvement had occurred. She also was referred to orthopedic specialists for evaluation and management of the lesion. 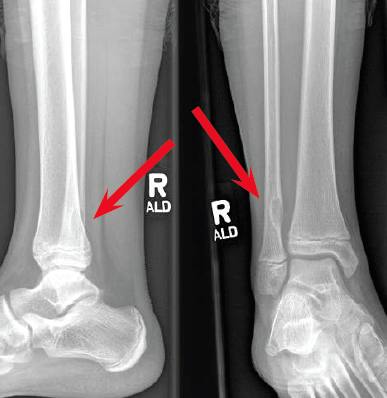 The estimated prevalence of NOFs of the long bones is 30% to 40% in skeletally immature children.1 Boys are affected twice as frequently as girls. The majority of NOFs occur in the tibia (43%) and femur (38%), followed by the fibula and humerus.4 Most of the lesions disappear by the age of 20 to 25 years and are self-limiting, with progressive resolution via involution and ossification over the years.3,4

NOFs usually are asymptomatic and are detected incidentally on radiographs in children and teenagers. On plain radiographs, NOFs appear as small, well-defined, eccentric, and expansile lytic lesions, located in the metaphysis, with scalloped, sclerotic borders. Multiple lesions may be present.2 NOFs may have an atypical appearance as they fill with normal bone before they disappear. Lesions greater than 50% of the transverse diameter of the involved bone may contribute to a pathologic fracture.4 An NOF can have a more aggressive radiographic appearance in the presence of a concomitant pathologic fracture, but this should not be mistaken for malignant tumor.2,5

Diagnosis is based on history, physical examination findings, and radiographic findings.4 After diagnosis, small asymptomatic NOFs generally require no further follow-up. However, in younger children, the lesions may grow relative to adjacent bone, increasing the risk of pathologic fracture.5 Parents should be counseled to seek care if the area becomes painful or swollen. Biopsy, curettage, and bone grafting may be warranted for a painful lesion, or to prevent pathologic fracture if the lesion is greater than 50% of the diameter of the bone, or if the lesion is in a high-stress area such as the distal femoral metaphysis.4,5

Serial radiographs demonstrate that NOFs usually resolve during adolescence.4 Once the patient reaches adulthood, radiographs of the area either are completely normal or show a radiopaque area. The prognosis generally is excellent, and the risk of recurrence is lower than for other benign tumors.5

Meredith S. Campbell is a medical student at the University of Florida College of Medicine in Gainesville, Florida.

Carolyn G. Carter, MD, is an associate professor in the Department of Pediatrics at the University of Florida College of Medicine.

Maria N. Kelly, MD, is an associate professor in the Department of Pediatrics at the University of Florida College of Medicine.