What Is a Logical Approach for Choosing Among New Agents for Patients With Type 2 Diabetes?

Dr Herrick is a fellow in the department of internal medicine, division of endocrinology, metabolism, and lipid research at Washington University School of Medicine in St Louis, Missouri.

kim a. carmichael, MD––Series Editor:Dr Carmichael is associate professor of medicine, department of internal medicine, division of endocrinology, metabolism, and lipid research at Washington University School of Medicine in St Louis, Missouri. Dr Carmichael discloses that he is on the speaker’s bureau for Merck and Amylin/Bristol-Myers Squibb that may be relevant to the content of this manuscript.

Q: What are the new drug therapies available for type 2 diabetes?

A: Approximately two-thirds of US adults are now obese or overweight, predisposing to the development of type 2 diabetes, which is now estimated to affect 8% of the adult population, with another 3% undiagnosed.1 As such, this has been an area of active drug development.

Q: What are incretin hormones and amylin and how do they affect glucose control?

A: The incretin effect refers to the differential response in insulin secretion when glucose is delivered orally as opposed to intravenously. There are two major incretin hormones secreted from the gut in response to a meal. These are GLP-1, which is released by the distal small bowel in response to large loads of complex nutrients, and glucose-dependent insulinotropic polypeptide (GIP), which is secreted by the proximal small bowel in response to small loads of rapidly absorbable nutrients. Both stimulate insulin secretion only when glucose levels are normal or elevated, but only GLP-1 inhibits glucagon release. GLP-1 also appears to increase satiety signals to the brain and may have cardiovascular benefits.2 As a result, GLP-1 has been a greater target for drug development than GIP.

Long-acting drugs have been designed to stimulate the GLP-1 receptor because of the short half-life of native GLP-1. DPP-4 degrades GLP-1 very quickly, and thus DPP-4 inhibitors are another way to enhance the duration of actions of native GLP-1 on insulin secretion and glucagon suppression. One key benefit to both GLP-1 receptor agonists and DPP-4 inhibitors is that they are unlikely to cause hypoglycemia alone because the effect is not active when glucose levels are low.

Q: What are the major benefits and side effects of GLP-1 receptor agonists, DPP-4 inhibitors, and an amylin mimetic, and is there any reason to choose one over another?

A: In terms of choosing among agents in each of these classes, there are limited data to support one over another, so much of the decision will be based on patient preference and insurance coverage. Once-daily liraglutide and once-weekly exenatide may affect patient preference more than twice-daily exenatide because of convenience or lifestyle. Patients who are reluctant to administer injections will prefer DPP-4 inhibitors to GLP-1 receptor agonists or pramlintide. Some of the clinical features of these medications are summarized in the Table. 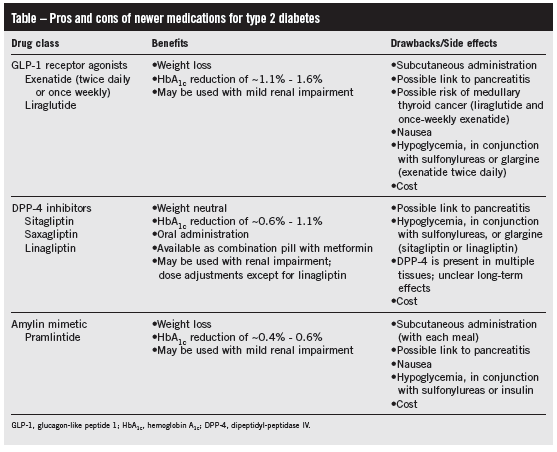 A meta-analysis and systematic review of these agents demonstrate overall hemoglobin A1c (HbA1c) and weight reduction to be greater with GLP-1 receptor agonists (HbA1c, −1.1% to −1.6%; weight, −2.0 to −2.4 kg) than with DPP-4 inhibitors (HbA1c, −0.6% to −1.1%; weight, −0.2 to −0.6 kg)3 or pramlintide (HbA1c, −0.4% to −0.6%; weight, −0.7 to −1.7 kg).4 No significant differences were found among DPP-4 inhibitors. Within the GLP-1 receptor agonist class, reductions in HbA1c and fasting plasma glucose tended to be greater for liraglutide and once-weekly exenatide, whereas twice-daily exenatide was better at lowering post-prandial glucose, likely related to timing of onset and duration of action for each medication. Nausea is a more common side effect among GLP-1 receptor agonists, although attenuated in the longer-acting formulations. Finally, it will be important to watch post-marketing surveillance on these drugs to assess adverse event profiles over time in comparison to older agents.

A: Given limited data comparing newer agents with each other and with older therapies, new guidelines are more flexible than in the past. Along with diet and lifestyle modification, metformin remains first-line therapy for all patients who can tolerate it. However, GLP-1 receptor agonists or DPP-4 inhibitors may be considered as add-on agents for those who do not meet HbA1c goals on metformin, diet, and exercise.5 They may also be considered for monotherapy in patients who cannot take metformin. In treatment algorithms, they are listed as viable alternatives to older oral therapies (sulfonylureas, thiazolidinediones) and insulin. In fact, they may confer benefits over older therapies in that they are better tolerated in renal failure (usually with dose adjustment), result in weight loss or weight maintenance, have low rates of hypoglycemia, and may also have cardiovascular benefit.

Q: Under what circumstances would other oral agents be useful?

A: Nateglinide and repaglinide could be used in lieu of older sulfonylureas in patients who have renal failure or a tendency toward hypoglycemia. They have a very short half-life (1.5 hours) and thus are less likely to cause low blood glucose levels; however, they must also be dosed more frequently (three times daily rather than once or twice daily) and in proximity to meals.

Colesevelam (a bile acid sequestrant) and quick-release bromocriptine (a dopamine-2 agonist) are FDA-approved for diabetes management and are generally well tolerated, but they tend to have more modest HbA1c effects than other medications.

Q: What are the primary differences among insulin analogues?

A: When possible, recommendations for intensive insulin therapy to achieve optimal glucose control focus on the combination of a mealtime rapid-acting insulin analogue and a once-daily basal insulin analogue. This combination reduces HbA1c to a greater degree with less hypoglycemia than older formulations of NPH and regular human insulin.

However, there are currently two basal analogues and three rapid-acting analogues among which to choose.

For basal insulins, a Cochrane review examined studies comparing glargine with detemir and determined that both achieved similar HbA1c reductions with similar rates of hypoglycemia. Detemir was associated with less weight gain than glargine, but it typically required a higher daily dose divided between two injections and was associated with more injection site reactions than glargine.6

In regards to the rapid-acting insulin analogues (lispro, aspart, and glulisine), there do not appear to be any clinically significant differences except glulisine has a slightly faster onset of action than lispro or aspart. This difference, however, has not translated into improvements in glycemic control or lower rates of hypoglycemia. Both lispro and aspart are pregnancy class B, while glulisine is class C because of a lack of human reproductive data.7 All basal and rapid-acting analogues are available in pens, which may be more convenient for patients than vials and syringes.n

1. Institute of Medicine. Accelerating the Progress in Obesity Prevention: Solving the Weight of the Nation. Washington, DC: The National Academies Press; 2012.