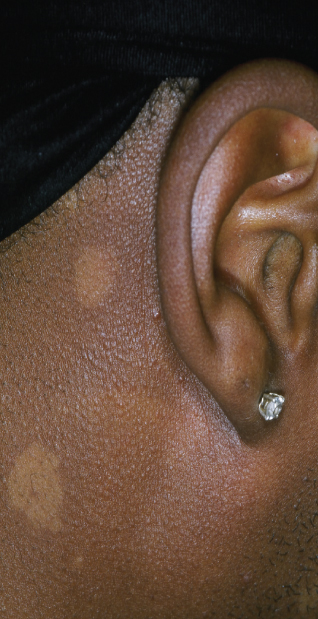 These hypopigmented ovoid lesions appeared each year in the spring and persisted into the early fall. The 23-year-old patient reported that the lesions were asymptomatic. A potassium hydroxide evaluation revealed the presence of short hyphal elements, along with clusters of spores.

All of these findings are consistent with tinea versicolor, which is essentially an overgrowth of a commensal yeast, Malassezia furfur. This yeast elaborates azelaic acid, which in turn triggers pigmentary changes in the skin. Because the causative organism is highly lipophilic, tinea versicolor is confined to the so-called seborrheic portions of the body, where sebum production is maximal. Warm weather and exercise are exacerbating factors as well, and almost complete remission in the winter is typical.

Treatment options include oral ketoconazole 200 mg once a week during the summer months, topical antifungals such as econazole, and regular shampooing with either zinc pyrithione–based or selenium sulfide–based products to control the numbers of organisms.