The authors report that they have no conflicts of interest and that no funding was provided for this paper. 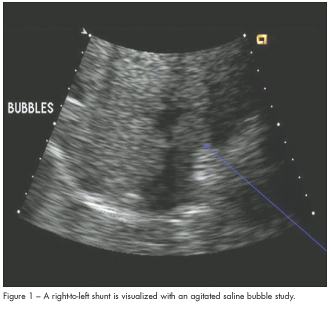 The morbidity and mortality of acute pulmonary embolism remain high despite advances in imaging techniques for rapid and accurate diagnosis.1-3 Treatment options are limited and directed toward anticoagulation to prevent progression of an already-formed thrombus.

Based on randomized controlled trials, the use of thrombolytics has been limited to a small patient population with cardiogenic shock and/or cardiopulmonary arrest.4 The purpose is to provide rapid resolution of pulmonary artery thrombus and return of normal hemodynamic parameters. The following case report describes the use of thrombolytics in a patient without hemodynamic instability but with persistent hypoxemia from massive bilateral pulmonary embolism.

A 62-year-old man presented to the emergency department with the chief complaint of acute dyspnea. He denied fevers, chills, productive cough, or chest pain and had been in his usual state of health before this episode. His medical and surgical history was significant for hypertension and a recent ankle fracture that required fusion surgery and immobilization. He quit smoking in the 1960s and recently underwent an exercise treadmill test, which demonstrated no evidence of myocardial ischemia.

He was in acute respiratory distress with perioral cyanosis and a respiration rate of 38 breaths per minute. There was also marked use of accessory muscles of respiration. Temperature was 35.8°C (96.4°F); heart rate, 116 beats per minute (sinus); and blood pressure, 154/98 mm Hg. Oxygen saturation by digital pulse oximetry was 82% while receiving 100% oxygen supplementation via a non-rebreather mask. His lungs were clear to auscultation, and cardiovascular examination revealed no jugular venous distension and normal heart tones without murmur, gallop, or rub. 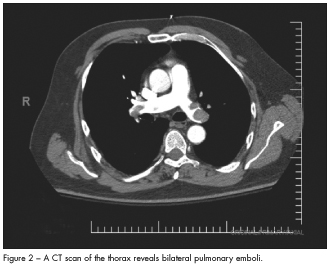 The patient was transferred to the intensive care unit, and thrombolytic therapy was initiated with alteplase, 100 mg infusion over 2 hours followed by administration of unfractionated heparin. Shortly after, oxygen saturation normalized. The patient tolerated the treatment without complications and was extubated 3 days later. A Doppler study of the lower extremities confirmed the presence of acute deep vein thrombosis throughout the mid-distal superficial femoral, popliteal, and posterior tibial veins of his left lower extremity. An inferior vena cava filter was placed, and warfarin was initiated prior to the patient’s discharge from the hospital.

A follow-up 2-dimensional echocardiogram 2 months later demonstrated normalization of RV function. There was a persistent patent foramen ovale, although the degree of right-to-left shunting had decreased significantly (Figure 3).

While there are not a large amount of data supporting the use of thrombolytics in this setting, a meta-analysis demonstrated some benefit with thrombolytic therapy in a subset of high-risk patients presenting with acute pulmonary embolism.4 Guidelines set forth by the European Society of Cardiology and the American College of Chest Physicians recommend the use of thrombolytic therapy in patients with hemodynamic compromise consisting of refractory hypotension or shock.5 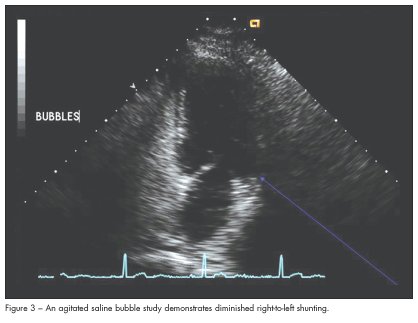 In massive acute pulmonary embolism, the presence of severe RV dysfunction leads to decreased LV preload and subsequently decreased cardiac output. This patient’s echocardiogram demonstrated moderate RV dysfunction and the presence of a large patent foramen ovale with right-to-left shunting by agitated saline bubble study. The presence of this large right-to-left shunt likely explains his profound and persistent hypoxemia, as well as the lack of hemodynamic instability. This patient’s interatrial septal defect allowed for adequate LV filling by allowing decompression of the right ventricle and shunting of blood into the left ventricle.

The presence of refractory hypoxemia in normotensive patients with acute pulmonary embolism may be yet another indication for thrombolytic therapy. The physiologic derangement in these patients may be as severe as in those who demonstrate hypotension and shock. The presence of an interatrial shunt may mask such physiologic disturbance by allowing for adequate LV filling pressures and cardiac output. While we do not advocate evaluating every patient with acute pulmonary embolism for right-to-left shunting, the presence of severe and persistent hypoxemia despite standard anticoagulation therapy may be a clue to the presence of this defect and the need for thrombolytic therapy.