Spontaneous Gas Gangrene in a Man With Diabetes

A 59-year-old man with diabetes presented with a 4-day history of an increasingly painful, swollen left foot. He could not recall any trauma. His symptoms began as a nontender, small red “bump” on the dorsum of his foot. He reported that after 3 days shooting pains radiated up his left leg to his back. He denied any fevers, chills, nausea, vomiting, or other systemic symptoms.

The patient was obese and used a wheelchair. His temperature was 37°C (98.6°F); heart rate, 102 beats per minute; blood pressure, 150/92 mm Hg; and oxygen saturation, 99% on room air. He rated the severity of the pain at 3 on a scale of 1 to 10. Bibasilar rales were appreciated on lung auscultation. Abdomen was soft and nontender with hypoactive bowel sounds.

The most striking finding was his extremely malodorous, erythematous and edematous left foot (Figure). There were black necrotic eschars involving the plantar and dorsal areas and blisters filled with clear fluid; palpable crepitus accompanied these deep ulcerations. A faint line of demarcation extended to the medial and lateral malleoli. Chronic stasis changes with prominent verrucous papillomatosis and edema were present in both lower extremities. Bone was appreciated during probing. 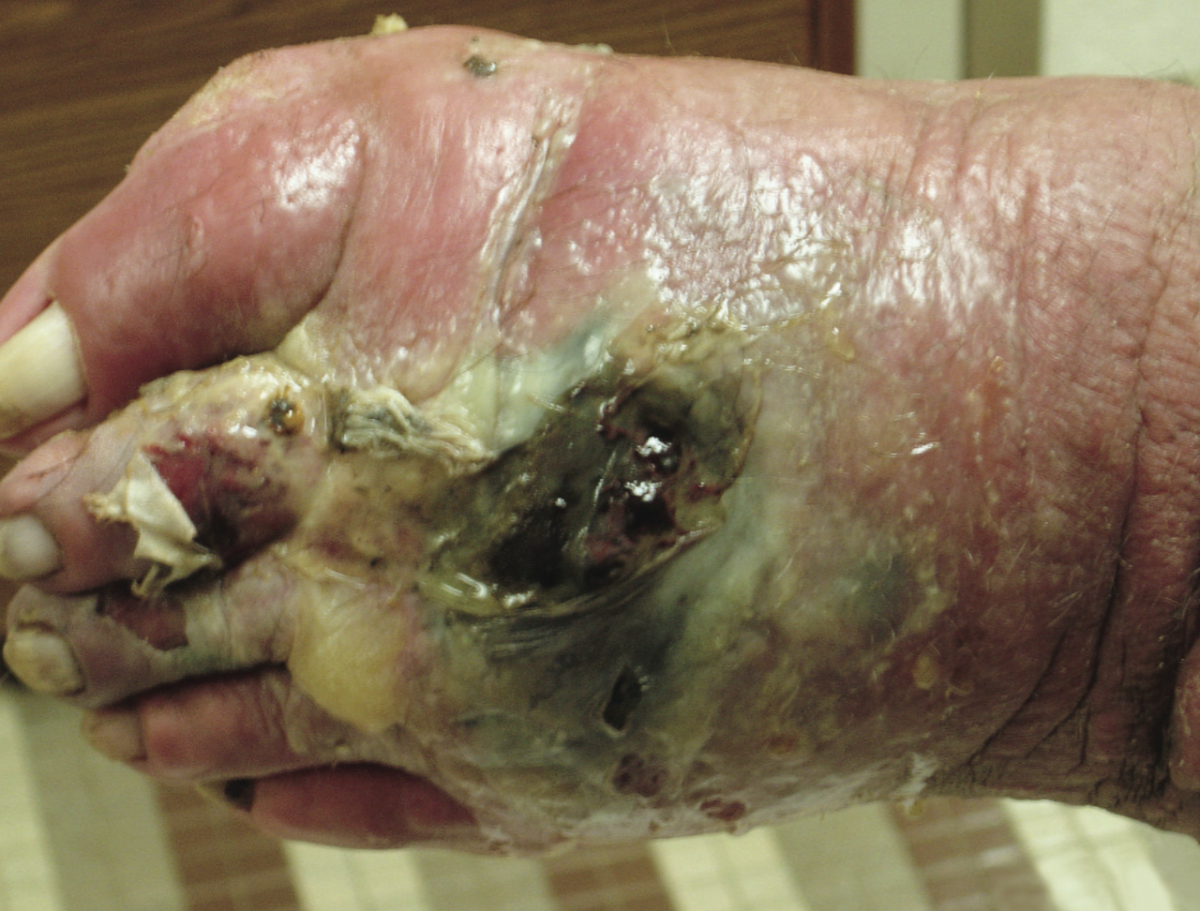 A vascular surgeon was immediately consulted, and the patient was admitted for treatment of gas gangrene. He underwent an emergency guillotine amputation of the left lower extremity, and he was given high doses of penicillin and gatifloxacin. On postoperative day 2, nurses noted bright red blood in his stool that continued for 2 more days. The patient denied any history of melena, hematochezia, or hema-temesis, but with further prompting he stated that he had had some loose, watery bowel movements during the past week.

On colonoscopy, a 4-cm tumor in the sigmoid colon was found. Biopsy revealed an adenocarcinoma of the colon, and further work-up demonstrated liver metastases.

Spontaneous gas gangrene, or distant clostridial myonecrosis, is a rapidly progressive tissue infection with prominent morbidity and mortality.1 It is typically caused by clostridia; these gram-positive, anaerobic, spore-forming bacilli may produce regional disease by invading tissues through exogenous or endogenous pathways and/or cause systemic disease via secretion of various toxins.1,2 Traumatic gas gangrene is most commonly associated with motor vehicle accidents, contaminated muscle injuries, and surgical wounds. Clostridial contamination occurs in more than 80% of traumatic wounds, but the incidence of gas gangrene is only 1% to 2%.3 Gas gangrene is caused by Clostrid-ium perfringens in 80% of cases.4

The classic feature of gas gangrene is severe pain disproportionate to the physical clinical signs. This symptom may initially be obscured if the patient has underlying neuropathy. Pain may precede the cutaneous findings by 24 to 48 hours.7 Large hemorrhagic bullae, skin necrosis, crepitus, and sensory or motor neurologic deficits are late signs; these are unusual findings in cellulitis and other soft tissue infections.8 Crepitus is a very sensitive indicator, but it is nonspecific and often presents late. Laboratory findings may include decreased hemoglobin level (due to hemolysis), elevated white blood cell count, and elevated muscle enzyme levels.

Gas gangrene is associated with multiple systemic diseases, including neutropenia, diabetes mellitus, necrotizing enterocolitis, Crohn’s disease, diverticulitis, and bowel infarction.7 Distant myonecrosis caused by C septicum has been repeatedly reported in association with hematologic and visceral malignancies, many of which have metastasized by the time of infection. In one series, 84% of patients with spontaneous gas gangrene who had no known malignancy were subsequently found to have an occult colon carcinoma, most frequently of the cecum.9

The hypothesized mechanism of these associations proposes that small microtears or disruption of the bowel mucosal integrity by a malignant tumor, inflammatory disease, or aggressive chemotherapy permits passage of normal flora (C perfringens is part of normal colonic flora) into the bloodstream with subsequent seeding of distant locations. This leads to rapid destruction of vulnerable tissue if regional vascularity, oxygenation, or immunologic functioning is impaired. Nontraumatic myonecrosis carries a significantly worse prognosis than traumatic myonecrosis.9

Therapy should begin immediately. Any delay in diagnosis and treatment may result in increased morbidity and mortality.10 Imaging studies may be beneficial but may delay immediate treatment.

Intravenous antibiotics and surgical debridement of necrosis are essential. Patients who receive antibiotics without surgical intervention have a poor prognosis.11 Surgical debridement of all necrotic tissue is paramount because thrombosis of the supplying blood vessels hinders antibiotic delivery.8 Debridement should extend until healthy tissue is visualized and bleeding is encountered at the margins. Initially, broad-spectrum antibiotics should be used until the results of sensitivity studies are available.12 Specific sensitivity is extremely important because resistant strains have been reported.13,14 Hyperbaric oxygen treatment has produced beneficial results in this setting.15