A 39-year-old white man presented with swelling and pain in both ankles and feet for the past 3 weeks. He had also noticed a nonpruritic rash over his shins and ankles. The skin was tender to the touch.

History. He reported no fever or chills, no symptoms of upper respiratory tract infection symptoms, no cough, and no diarrhea or constipation. He also denied having chest pain, Raynaud phenomenon, dry eyes, or dry mouth. His medical history was significant for obstructive sleep apnea and sick sinus syndrome, the latter of which had led to pacemaker placement. His family history was noncontributory. He was married, had no history of tobacco or alcohol use, and had no environmental exposures or pets. The patient had no allergies, and the only medication he had been taking was over-the-counter naproxen.

Physical examination. On examination, he was afebrile, and his vital signs were stable. The eyes were normal, and the lungs were clear. There were no murmurs. He had trace edema in both extremities. He had bilateral ankle effusion with soft tissue swelling over both feet. He had erythema nodosum over the ankles and shins (Figure 1). There were no neurologic deficits. 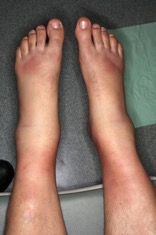 Diagnostic tests. Results of chest radiography (Figure 2) and computed tomography (Figure 3) revealed bilateral hilar adenopathy. The angiotensin-converting enzyme (ACE) level was found to be high. Results of a complete blood cell count, a basic metabolic panel, and liver function tests were normal, as were the erythrocyte sedimentation rate and the C-reactive protein level. 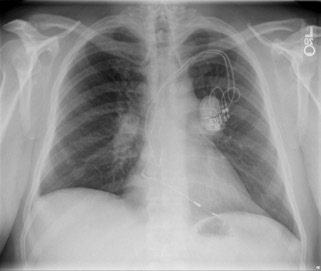 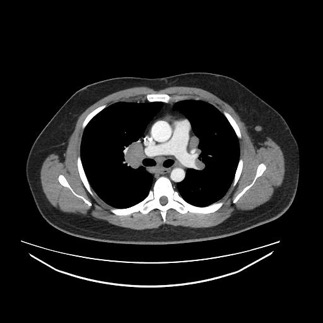 Outcome of the case. Given the presence of the triad of hilar adenopathy, erythema nodosum, and acute polyarthritis, the patient received a diagnosis of Lofgren syndrome. He had been taking nonsteroidal anti-inflammatory drugs (NSAIDs) without benefit. He was started on prednisone, 20 mg, which was tapered over 6 weeks, leading to complete resolution of his symptoms.

Discussion. Lofgren syndrome is seen in less than 5% to 10% of sarcoidosis cases and is usually self-limiting.1 Joint involvement in Lofgren syndrome is the most common presentation of acute sarcoid arthritis.1 It most commonly presents as arthritis/periarthritis involving both ankles. In more than 90% of cases, the acute polyarthritis involves both ankles.1 Approximately 15% of patients with Lofgren syndrome have an elevated ACE level.1 Those with an elevated ACE level tend to have a more persistent arthritis.
The presence of all of the features of Lofgren syndrome has a 95% diagnostic specificity for sarcoidosis, allowing a clinical diagnosis to be made without biopsy.2

According to the Visser criteria for sarcoidosis in patients with arthritis and bilateral hilar lymphadenopathy, patients must have the 3 of following 4 characteristics in order to establish the diagnosis (sensitivity, 93%; specificity, 99%)3:

In addition to the Visser criteria, symptoms of sarcoid arthritis vary among patients. Most white patients presenting with Lofgren syndrome have spontaneous remission.3 Symptomatic treatment of acute sarcoid arthropathy includes the use of NSAIDs.3