A 7-year-old previously healthy and active boy without comorbidities presented to the pulmonary clinic with a 6-month history of dry cough, recurrent left lower lobe pneumonia, and limited physical activity. He had been on several rounds of oral antibiotics, oral and inhaled corticosteroids, and bronchodilator therapy with no significant improvement in his respiratory symptoms. 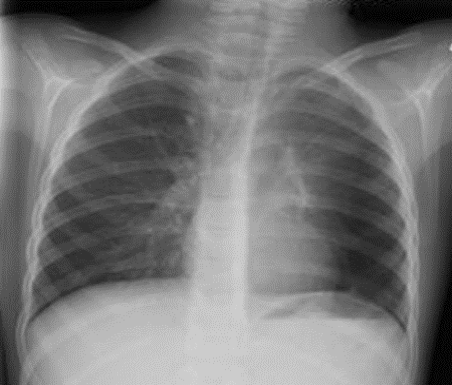 A computed tomography (CT) scan with contrast showed a nodular endobronchial lesion in the left mainstem bronchus with left upper lobe and lingular atelectasis and a hyperinflated left lower lobe. An azygos fissure was noted in the right lung (Figure 2). 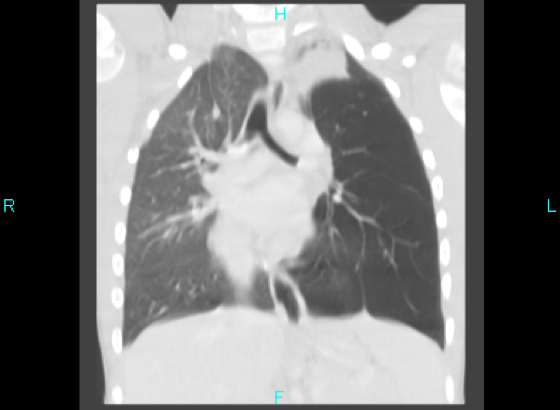 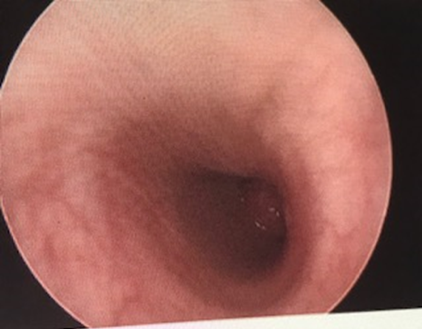 Figure 3. An obstructive endobronchial lesion at the distal entry of the left mainstem bronchus.

Our patient was started on antibiotics to treat any underlying infectious processes beyond the mass and was transferred to an advanced pediatric subspecialty center. There, results of an interventional bronchoscopy confirmed similar findings. Histology test results of the initial forceps biopsy of the lesion revealed features consistent with salivary gland neoplasm: epithelial cells positive for cytokeratin AE1/AE3 by immunochemical stain and negative for neuroendocrine markers such as synaptophysin and CD56.

MEC accounts for 0.1% to 0.2% of primary lung tumors.1 It is defined by a combination of mucus-secreting squamous and intermediate cell types.1 The reported age range is wide, from 2 to 78 years, with both sexes affected equally.1,4-6

In the airway, MEC arises from the submucosal bronchial glands and primarily affects the main or lobar bronchi, but it can involve any segmental bronchi or peripheral lung,1,2,7 Most common symptoms of pulmonary MEC are due to large airway obstruction and include cough, bronchitis, hemoptysis, chest pain, postobstructive recurrent pneumonia, and pulmonary abscesses.1,3,6-9 Rare cases of pulmonary MEC can present as a pneumothorax.8

Diagnosis is often delayed due to the rarity of the condition, with some studies citing an average of 11 months.1,7,10

On chest radiographs, MEC presents as area of central airway mass with postobstructive pneumonia or peripheral atelectasis, and on CT as a smooth oval or lobulated airway mass obstructing the bronchus.1,2,5 On bronchoscopy, the tumor usually appears as a smooth, rounded, tan-colored mass with intact overlying mucosa.5,8,10

Several different chromosomal translocations have been identified in MEC tumors. The most common is t(11;19)(q21;p13), which creates a fusion gene, MECT1-MAML2 (MEC translocated-1-mastermind-like 2).1,8,11-13 The presence of MECT1-MAML2 is associated with lower clinical stage, low-grade tumor histopathology and a favorable prognosis,12-14 as was the case in our patient.

Based on the recommendations of the oncology and thoracic surgery team, the decision was made to excise the endobronchial lesion to increase disease-free survival. The patient successfully underwent complete surgical resection of the mass and reconstruction of the left mainstem bronchus. The mass was 1.1 cm in size, histologically classified as low grade, with no lymph node involvement, and the margins were free of the tumor.