Cutaneous Linear Hypopigmentation as a Result of Periarticular Corticosteroid Injection

A 63-year-old African American woman presented to a dermatology clinic for evaluation of a 2-month history of asymptomatic progressive hypopigmentation of her right hand and forearm. She had a family history of unspecified hypopigmentation in her father, and she wanted to be evaluated for possible vitiligo.

The patient reported having received a periarticular injection of 1.0 mL of triamcinolone, 40 mg/mL, into the right middle finger 4 months prior as treatment for trigger finger. She noted the insidious development of hypopigmentation around the injection site 2 months after the corticosteroid injection, spreading distal to proximal in a linear distribution from the injection site. She denied any paresthesia, numbness, or weakness in her right hand and denied any other hypopigmented areas. 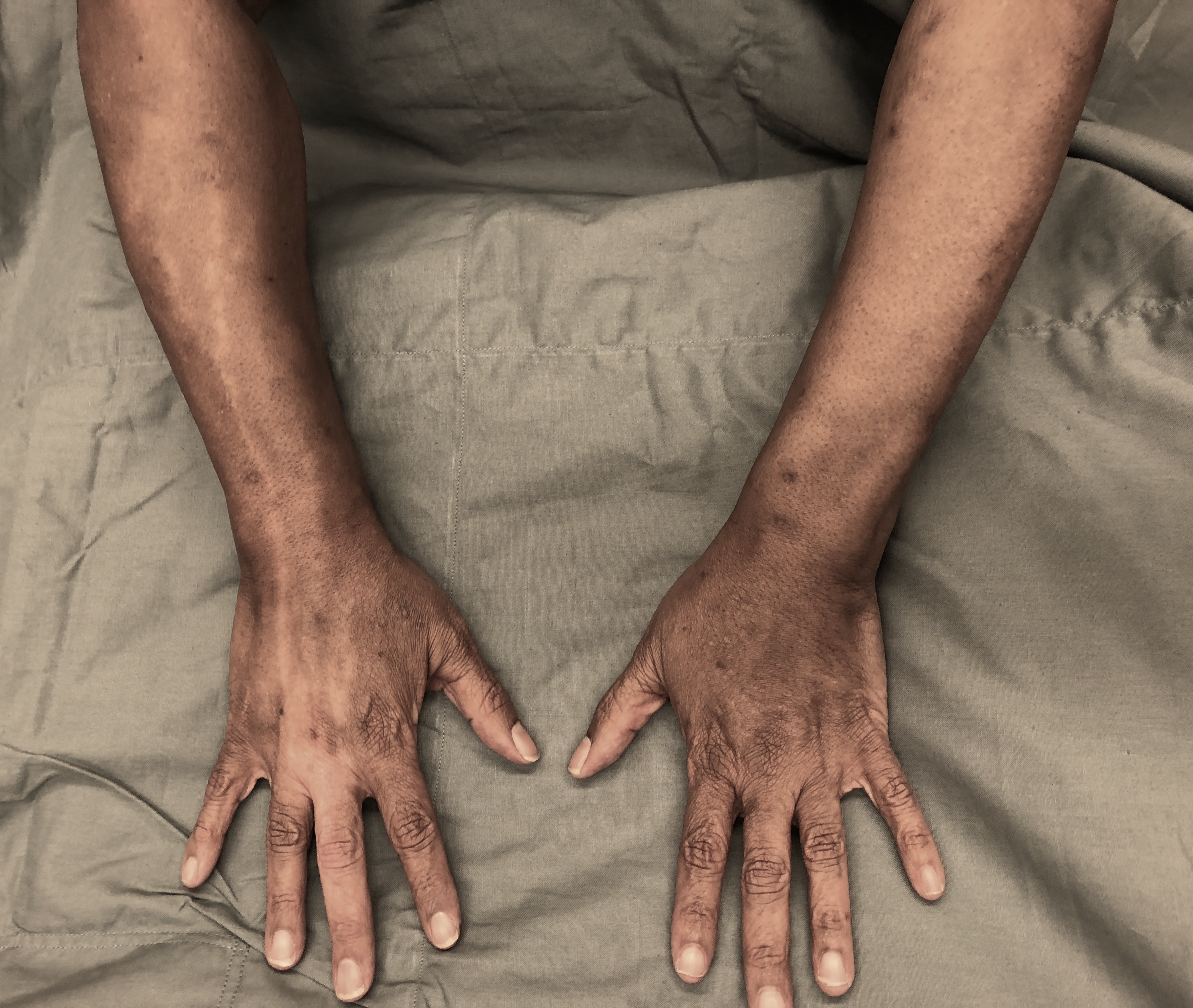 Discussion. Cutaneous hypopigmentation is a known uncommon adverse effect of intralesional and intra-articular glucocorticoid injections, reported in 1.3% to 4% of patients undergoing such injections.1 Other reported cutaneous effects include atrophy, hypersensitivity reactions, and telangiectasias.

Despite the frequent use of intralesional and intra-articular glucocorticoid injections to treat rheumatologic, dermatologic, and orthopedic conditions, the mechanism underlying cutaneous hypopigmentation is not well understood. Proposed theories include mechanical effects caused by edema, direct cytotoxic effects, changes in ground substance, or vasoconstriction.2-4

Risk factors that increase the odds of developing hypopigmentation following local glucocorticoid injections are unknown. Most reported cases cite triamcinolone acetonide as the causative agent; however, this may be a result of its frequent use. Caution must be taken with darkly pigmented patients, since the contrast of irregular hypopigmentation can be more apparent.

A review of the medical literature reveals a variation in injected corticosteroid volume, size, and time course of hypopigmentation. In most cases, hypopigmentation develops within 2 months after injection, as in our patient’s case, and spontaneously resolves within 6 to 9 months.5-7

The most commonly reported morphology of hypopigmented skin areas is poorly circumscribed or ovoid patches. Linear hypopigmentation, as presented in this patient’s case, is less frequently reported.5-7 The observed linear pattern is hypothesized to result from the spread of the corticosteroid along lymphatics or venous channels.8,9

This patient’s case serves as a reminder of the uncommon risk of cutaneous hypopigmentation following glucocorticoid injections. Patients, particularly those with dark skin pigmentation, should be adequately informed of the potential risks. Those who have experienced such adverse effects can be reassured that the hypopigmentation likely will resolve with time. Furthermore, the initial evaluation of hypopigmentation warrants a detailed history of recent chemical and drug exposures to identify this uncommon adverse effect.