Femur Fracture in a Newborn

A neonate was noted to have swelling of the right thigh on her initial newborn examination. The patient had been born via unplanned cesarean delivery for breech presentation to a 24-year-old gravida 3, para 3 woman at 39 weeks of gestation. The pregnancy had been uncomplicated, with a normal anatomy scan at 29 weeks of gestation. There was no significant maternal medical history.

Delivery had been complicated by several fetal decelerations after maternal anesthesia was given and a loose nuchal cord that was reduced quickly after delivery. Extraction had taken place without difficulty. The girl had been evaluated by the neonatal critical care team immediately after birth, at which time her Apgar score was 9/9 at 1 and 5 minutes.

Physical examination. The neonate’s birth weight was 3005 g and was appropriate for her gestational age. On examination by the delivery team, the patient’s right leg was abducted and flexed without proximal movement, with a palpable femoral head, findings that were concerning for dislocation. The lower extremities were noted to have symmetric and appropriate capillary refill and spontaneous movement of the right foot and ankle. 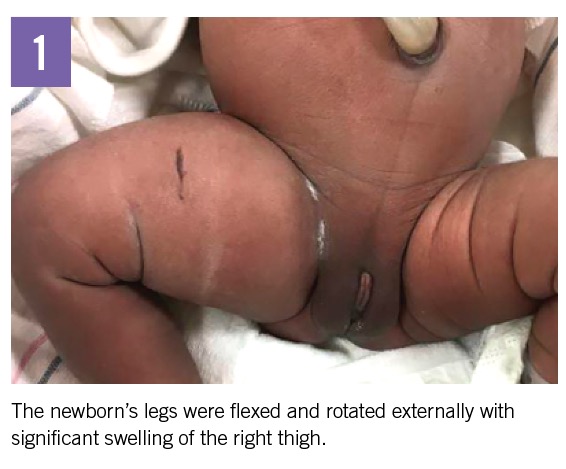 The orthopedics team was consulted, and radiography was performed, the results of which are shown in Figures 2 and 3. 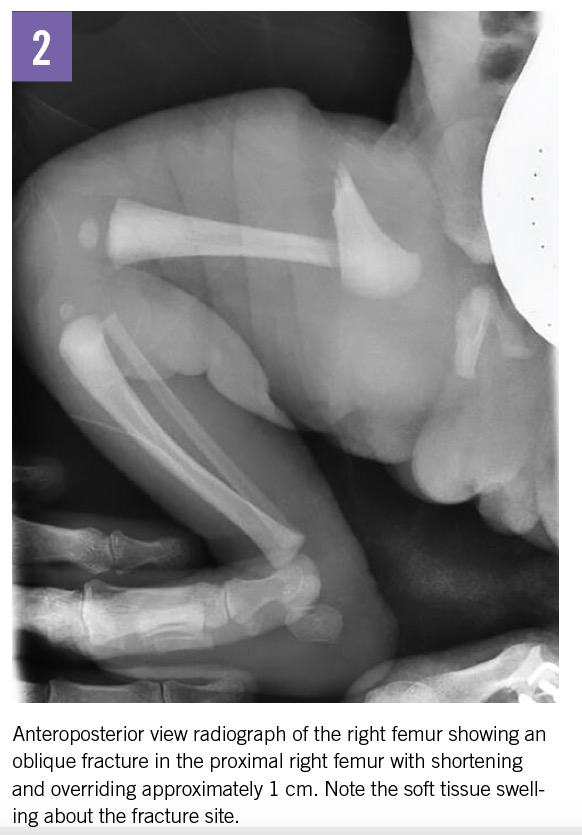 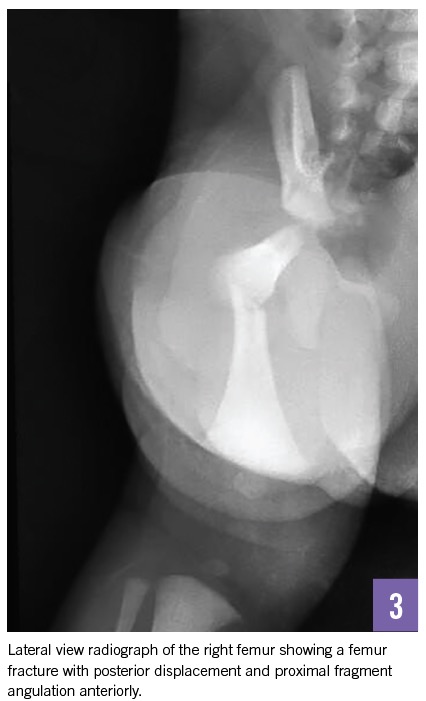 Diagnosis. Based on the physical examination findings and radiography results, the patient received a diagnosis of an oblique fracture in the proximal right femur with posterior displacement and shortening. The proximal fragment was angulated anteriorly. Further discussion and review of images with the radiology team revealed no evidence of osteopenia, osteogenesis imperfecta, or skeletal dysplasia. After the fracture was discovered, the primary obstetrician denied any history of trauma during the delivery and specifically reported that this had not been a difficult extraction.

The orthopedics team placed the patient in a Pavlik harness. Her hemoglobin was monitored closely for blood loss and remained stable throughout her hospitalization. This patient was discussed with the pediatric genetics team, who felt that no further testing for bone dysplasias, osteogenesis imperfecta, or other etiologies was required.

The patient remained in a Pavlik harness until 8 weeks of age. At her most recent clinic appointment at 4 months of age, radiographs showed healing and improved alignment. Her Galeazzi sign was noted to be very slightly positive, with her left knee slightly higher than the right, but was considered improved from prior visits.

Discussion. This newborn girl presented with unilateral leg swelling, and her case was remarkable due to the initial misinterpretation of the physical examination findings that led to a primary concern for congenital hip dislocation. Subsequent examination findings suggested a differential that included femur fracture and hip dysplasia or other birth deformity.

Numerous cases of femur fractures in the newborn period have been reported in the literature, including several instances in which fractures were missed in the hospital and presented in an outpatient setting after discharge from the nursery.1-3 One study found that the average age of identification of femur fracture was 4 days.4

Most newborns with femur fracture present with swelling of the affected thigh and decreased mobility of the leg.1,2

Treatment for neonatal femur fractures is immobilization with a splint or Pavlik harness.1,3

This case illustrates the importance of careful physical examination and pause with diagnosis of congenital hip dislocation in a patient with additional risk factors. In spite of the early misdiagnosis, our patient’s fracture was diagnosed and treated early, but she will need to be monitored closely for developmental delays.