A Woman With a Rash on Her Palms and Soles

A 28-year-old woman with a history of alcohol abuse presented to the emergency department with a 2-month history of a mildly pruritic rash involving the palms and soles.

History. She reported a history of treated gonorrhea, chlamydia, and trichomonas infections. She had been sexually active with multiple male partners and reported inconsistent condom use. She reported occasional marijuana use. She had no history of hiking or other travel. She had a mild cough but denied fevers, chills, other systemic symptoms, or alterations in ocular or neurologic function. 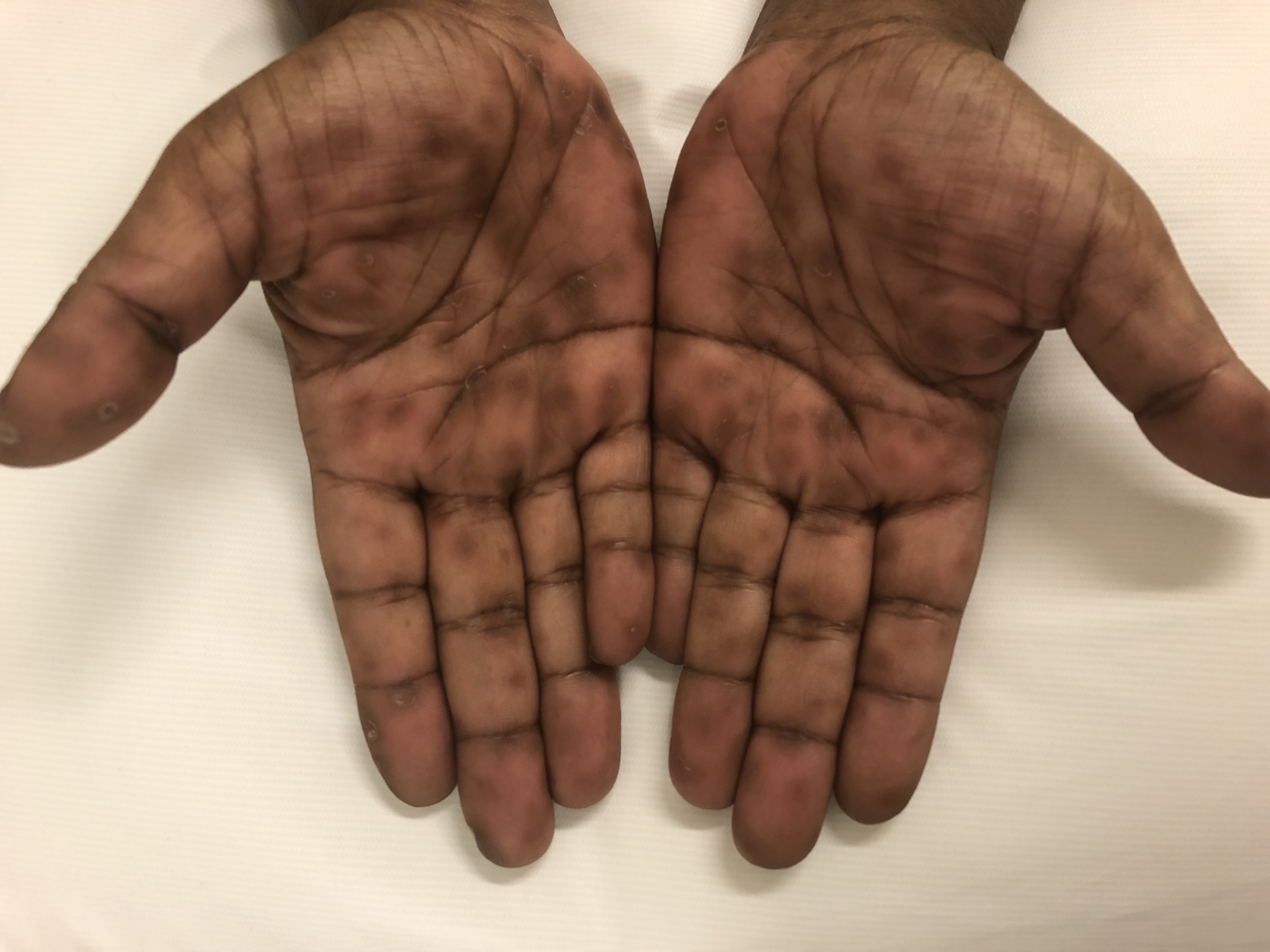 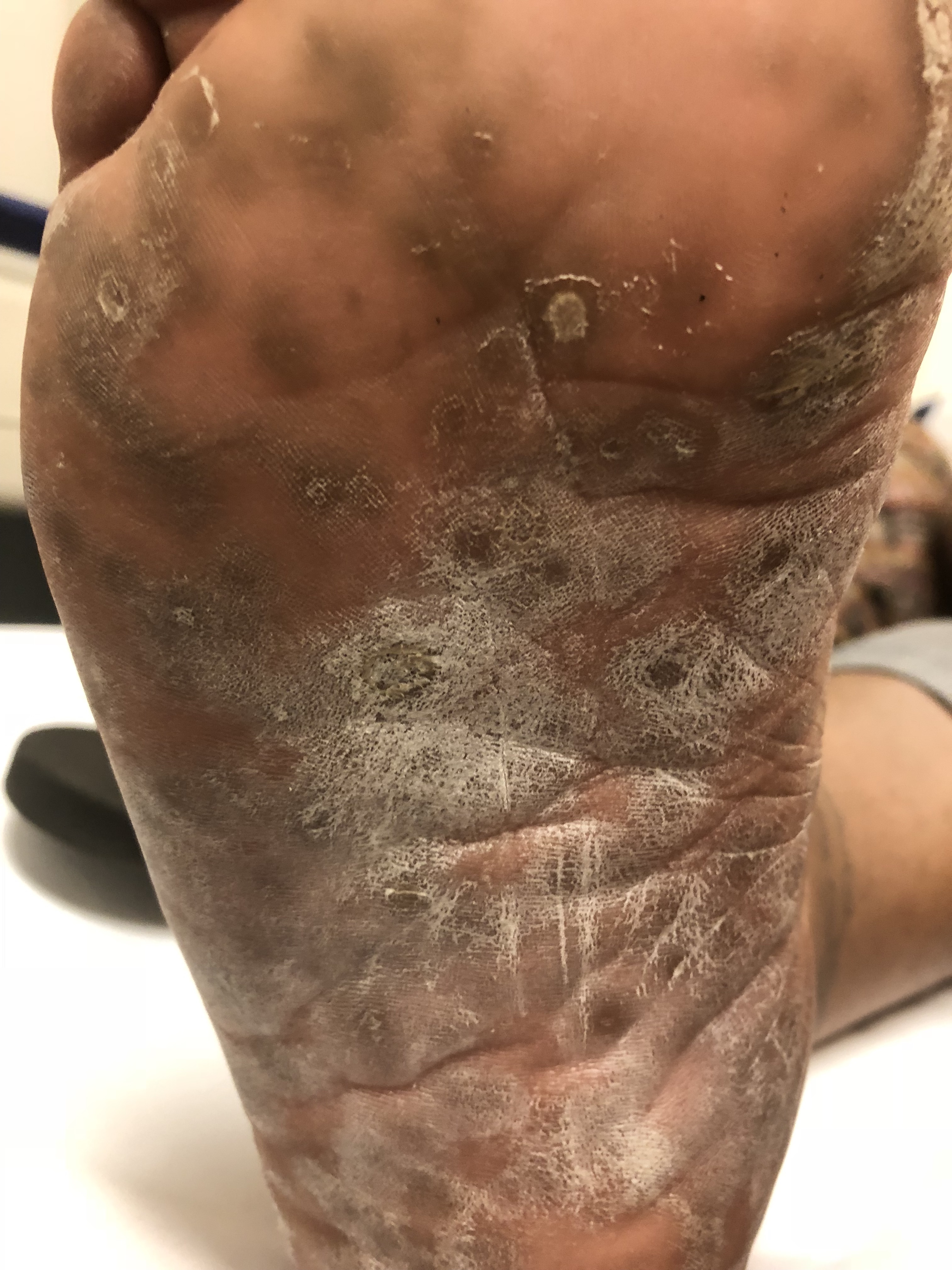 Results of a complete blood cell count and a metabolic panel were within normal limits. Screening syphilis immunoglobulin G was greater than 8.0 (reference range, < 0.9). Confirmatory nontreponemal rapid plasma reagin (RPR) testing was reactive, with a titer of 1:16. HIV test results 1 month prior were negative.

The differential diagnosis included syphilis, Rocky Mountain spotted fever, hand-foot-mouth disease, and psoriasis. Hand-foot-mouth disease may manifest as a macular rash with oral lesions but should not persist for 2 months.1 Rocky Mountain spotted fever can present with a palmoplantar macular rash that becomes petechial; this presentation should be accompanied by systemic symptoms, laboratory test abnormalities, and often a history of a tick bite.2 Palmoplantar psoriasis could be considered, but the patient had no pustules on her palms or soles, no nail pitting, no psoriatic plaques, nor other signs consistent with psoriasis.3-5

Syphilis is a sexually transmitted infection caused by the spirochete Treponema pallidum. Rates of primary and secondary syphilis have been increasing since 2005 in the United States, disproportionately affecting men who have sex with men.6 The current observed rate may underestimate the true trend of syphilis infection, given underreporting of infection status. A higher rate of diagnosed syphilis in black and Hispanic men and women has been observed.6

Syphilis is classified into different stages depending on clinical presentation and time course of disease. Primary syphilis, characterized by a painless chancre at the area of inoculation, occurs up to 3 weeks after exposure. Most commonly located on the genitals, chancres represent a localized immunologic response against the spirochete. Left untreated, manifestations of secondary syphilis develop within 10 weeks of chancre appearance.3,5 The classic triad of secondary syphilis consists of rash, mucosal ulceration, and lymphadenopathy.3

This patient’s rash was typical of early-onset secondary syphilis. The occasionally pruritic pink-brown macular rash involves the palms, soles, and trunk. It may become papular, have surrounding collarettes of hyperkeratotic scale (Biett sign), and assume a psoriasiform appearance.3-5 Although lymphadenopathy is commonly observed at the time of presentation, this patient displayed no such findings. Mucous patches are the most common oral lesions of syphilis, appearing as smooth plaques with occasional pseudomembrane.3 “Moth-eaten” alopecia, wart-like condylomata lata, and nonspecific symptoms such as fever, sore throat, or malaise are also common.3,5

Developing years after initial infection, tertiary syphilis is defined by gummas (nodular lesions with an arciform pattern), tabes dorsalis (syphilitic involvement of the posterior spinal cord and nerve roots), or endarteritis.5 Neurologic involvement, particularly involving the ophthalmologic or vestibular systems, may develop at any point after infection. Latent syphilis should be considered in clinically asymptomatic individuals with positive nontreponemal or treponemal test results.7

Definitive diagnosis of syphilis involves visualization of T pallidum on dark-field microscopic examination.3,5,8 Treponemal screening tests such as rapid testing or enzyme immunoassays for syphilis immunoglobulin G and M have demonstrated acceptable sensitivity, specificity, and ease of use. With appropriate clinical suspicion, treponemal screening tests should be ordered and confirmed with a nontreponemal test.3,5,7-9 Examples of nontreponemal tests include the VDRL test and RPR testing. This patient’s RPR titer was mildly lower than the classic threshold of 1:32 in secondary syphilis.3 This highlights the importance of considering both the clinical presentation and laboratory test results when assessing patients at risk of syphilis infection. HIV status should be tested in all patients with confirmed syphilis, with additional consideration for gonorrhea and chlamydia testing in risk-prone individuals.7,9 Involvement of neurologic, ophthalmic, or vestibular systems should be evaluated with cerebrospinal fluid (CSF) analysis, slit-lamp examination, and otologic examination, respectively.7

For primary and secondary syphilis, a single dose of intramuscular penicillin G benzathine, 2.4 million units, is recommended.3,5,7,10 In persons with penicillin allergy, antibiotic regimens using doxycycline, azithromycin, or ceftriaxone may be used.9,10 Treatment of tertiary syphilis requires 3 doses of weekly intramuscular penicillin.7,10 The most appropriate treatment regimen of neurosyphilis is intravenous penicillin for up to 2 weeks; response is monitored by CSF examinations.7 Treatment should be considered for sexual contacts of persons with confirmed syphilis infection.5,7

Outcome of the case. This patient received a diagnosis of secondary syphilis, given her history of high-risk sexual encounters, diffuse macular rash, and positive serologic test results. One dose of 2.4 million units of intramuscular penicillin was administered in the emergency department. Follow-up was arranged after discharge so she could establish outpatient care; have screening for other comorbidities such as HIV, gonorrhea, and chlamydia; and have follow-up RPR/serologic testing.

This case exemplifies that secondary syphilis may present with only the signature diffuse maculopapular rash and mild pruritus in the absence of lymphadenopathy, mucosal patches, or other systemic symptoms. Recognition of characteristic palmoplantar findings and high suspicion for syphilis are crucial, given the increasing incidence of syphilis in the United States. Appropriate screening and treatment should be considered in all patients at risk of infection.