Pulmonary Actinomycosis in an Immunocompetent Patient With Pulmonary Embolism

A 49-year-old man presented to the emergency department (ED) for a chronic cough with intermittent hemoptysis, fever, and flank pain. He denied any history of tuberculosis exposure or smoking. The patient was in good health before this episode with a medical history significant only for cervical spinal fusions secondary to a motor vehicle accident 1 year prior to presentation.

In the ED, the patient had a temperature of 38.9°C and an oxygen saturation of 99%. Laboratory test results revealed an elevated white blood cell count of 12,000/µL with an elevated neutrophil count of 9500/µL. Computed tomography (CT) of the abdomen revealed no stones, but an incidental lung mass was seen. Follow-up chest CT with intravenous (IV) contrast revealed a 6.7 × 7.7-cm cavitary lesion in the right middle lobe with mediastinal adenopathy and right pulmonary embolus (PE) (Figure 1). 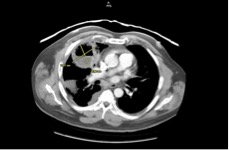 The patient was admitted on airborne isolation and started on empiric IV vancomycin and levofloxacin. Bridging therapy with low-molecular-weight heparin and warfarin were also initiated for PE, which later was found secondary to positive lupus anticoagulant test results. Tuberculosis was ruled out with negative acid-fast bacilli culture and interferon-γ release assays results. Sputum cultures and serum cultures were negative for pathogens.

The patient was discharged on the 12th day of admission and maintained on oral ciprofloxacin and trimethoprim-sulfamethoxazole (TMP-SMX) for 13 weeks and daily ertapenem infusions for 4 weeks. He remained on daily warfarin. Follow-up chest CT scans at 4-week follow-up revealed complete resolution of the pulmonary abscess and no pleural effusion (Figure 2). 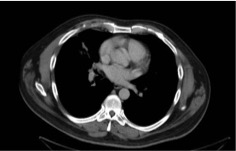 Figure 2. CT scans at 4 weeks showed that the lung lesion had completely resolved after appropriate treatment.

A pulmonary abscess can be life-threatening; thus, timely diagnosis of either an infectious or malignant etiology is imperative for survival. However, in our patient’s case, it was difficult to delineate the etiology of the lung lesion, because the patient previously had been healthy, without any risk factors. Based on the CT findings that showed a concurrent PE on the ipsilateral side alongside diffuse mediastinal lymphadenopathy, malignancy was suspected more than infectious etiology.

From the lung biopsy, we were able to definitively find the cause of the lung abscess, which was A graevenitzii. However, confusion remained about the pathophysiology of how an immunocompetent patient could present with a large lung abscess. We hypothesized that the PE was the trigger of a pulmonary infarction in the right middle lobe that provided an optimal medium for infection with A graevenitzii, a facultative anaerobe,1 to form a lung abscess. Further evidence for PE being the inciting factor was the finding that the patient was more prone to thromboembolism not only due to a positive lupus anticoagulant test result, but also from leading a sedentary lifestyle because of chronic cervical pain from a prior motor vehicle accident.

To our knowledge, this patient’s case is the first case of pulmonary actinomycosis caused by A graevenitzii that clinically mimicked malignancy and was later found to be prompted by PE with subsequent pulmonary infarction.

This case was unique in how rapidly the patient developed a large lung abscess, reinforcing the importance of timely diagnosis of pulmonary actinomycosis. However, this can be difficult given the similarities in clinical presentation of lung abscess and lung malignancy.2 Delaying treatment increases the risk of progression of disease in the pleura or chest wall that may cause hemoptysis or bronchoesophageal fistula.1 Diagnostic measures include fine-needle aspiration, transbronchial biopsy, CT, or ultrasound-guided biopsies.1 In our patient, the lung biopsy during bronchoscopy confirmed the presence of A graevenitzii.

Most actinomycotic infections are polymicrobial, with a variety of other microorganisms frequently found at infection sites in addition to Actinomyces species.3 In our patient’s case, scant growth of S exigua and P micra was identified in bronchial washings; both organisms are gram-positive anaerobes that are normal constituents of the oral cavity flora.4,5

The standard treatment for pulmonary actinomycosis is penicillin G, but no scheduled regimens have been published.1 In a previous case report, high-dose IV penicillin was administered for 4 to 6 weeks, followed by 6 to 12 months of oral amoxicillin therapy, whereas other cases have been treated with oral penicillin only.1 In our patient, the outcome was favorable with empiric IV broad-spectrum antibiotics with subsequent oral TMP-SMX and ciprofloxacin for 13 weeks and daily infusions of ertapenem for 4 weeks. Also, the patient was maintained on warfarin to prohibit further inciting embolus-related sequelae.